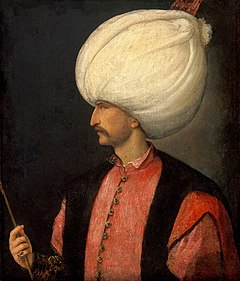 Suleiman the Magnificent, the longest-reigning sultan of the Ottoman Empire

Sultan ( /ˈsʌltən/; Arabic: سلطان‎ sulṭān, pronounced  [sʊlˈtˤɑːn, solˈtˤɑːn]) is a position with several historical meanings. Originally, it was an Arabic abstract noun meaning "strength", "authority", "rulership", derived from the verbal noun سلطة sulṭah, meaning "authority" or "power". Later, it came to be used as the title of certain rulers who claimed almost full sovereignty in practical terms (i.e., the lack of dependence on any higher ruler), albeit without claiming the overall caliphate, or to refer to a powerful governor of a province within the caliphate. The adjective form of the word is "sultanic", [1] and the dynasty and lands ruled by a sultan are referred to as a sultanate (سلطنة salṭanah).

The term is distinct from king (ملك malik), despite both referring to a sovereign ruler. The use of "sultan" is restricted to Muslim countries, where the title carries religious significance, [2] [3] contrasting the more secular king, which is used in both Muslim and non-Muslim countries.

In recent years, "sultan" has been gradually replaced by "king" by contemporary hereditary rulers who wish to emphasize their secular authority under the rule of law. A notable example is Morocco, whose monarch changed his title from sultan to king in 1957.

History of the term

The word derives from the Arabic and Semitic root salaṭa “to be hard, strong”. The noun sulṭān initially designated a kind of moral authority or spiritual power (as opposed to political power), and it is used in this sense several times in the Qur'an. [4]

In the early Muslim world, ultimate power and authority was theoretically held by the caliph, who was considered the leader of the caliphate. The increasing political fragmentation of the Muslim world after the 8th century, however, challenged this consensus. Local governors with administrative authority held the title of amir (traditionally translated as "commander" or "prince") and were appointed by the caliph, but in the 9th century some of these became de facto independent rulers who founded their own dynasties, such as the Aghlabids and Tulunids. [5] Towards the late 10th century, the term "sultan" begins to be used to denote an individual ruler with practically sovereign authority, [6] although the early evolution of the term is complicated and difficult to establish. [4] The first major figure to clearly grant himself this title was the Ghaznavid ruler Mahmud (r. 998 – 1030 CE) who controlled an empire over present-day Afghanistan and the surrounding region. [6] [4] Soon after, the Great Seljuks adopted this title after defeating the Ghaznavid Empire and taking control of an even larger territory which included Baghdad, the capital of the Abbasid caliphs. The early Seljuk leader Tughril Bey was the first leader to adopt the epithet "sultan" on his coinage. [4] While the Seljuks acknowledged the caliphs in Baghdad formally as the universal leader of the Muslim community, their own political power clearly overshadowed the latter. This led to various Muslim scholars – notably Al-Juwayni and Al-Ghazali – attempting to develop theoretical justifications for the political authority of the Seljuk sultans within the framework of the formal supreme authority of the recognized caliphs. In general, the theories maintained that all legitimate authority derived from the caliph, but that it was delegated to sovereign rulers whom the caliph recognized. Al-Ghazali, for example, argued that while the caliph was the guarantor of Islamic law ( shari'a), coercive power was required to enforce the law in practice and the leader who exercised that power directly was the sultan. [7] [6]

The position of sultan continued to grow in importance during the period of the Crusades, when leaders who held the title of "sultan" (such as Salah ad-Din and the Ayyubid dynasty) led the confrontation against the Crusader states in the Levant. [4] Views about the office of the sultan further developed during the crisis that followed the destruction of Baghdad by the Mongols in 1258, which eliminated the remnants of Abbasid political power. Thenceforth, the surviving descendants of the Abbasid caliphs lived in Cairo under the protection of the Mamluks and were still nominally recognized by the latter. However, from this time on they effectively had no authority and were not universally recognized across the Sunni Muslim world. [7] As protectors of the line of the Abbasid caliphs, the Mamluks recognized themselves as sultans and the Muslim scholar Khalil al-Zahiri argued that only they could hold that title. [4] Nonetheless, in practice, many Muslim rulers of this period were now using the title as well. Mongol rulers (who had since converted to Islam) and other Turkish rulers were among those who did so. [4]

The position of sultan and caliph began to blend together in the 16th century when the Ottoman Empire conquered the Mamluk Empire and became the indisputable leading Sunni Muslim power across most of the Middle East, North Africa, and Eastern Europe. The 16th-century Ottoman scholar and jurist, Ebüssuûd Mehmet Efendi, recognized the Ottoman sultan ( Suleiman the Magnificent at the time) as the caliph and universal leader of all Muslims. [7] This conflation of sultan and caliph became more clearly emphasized in the 19th century during the Ottoman Empire's territorial decline, when Ottoman authorities sought to cast the sultan as the leader of the entire Muslim community in the face of European ( Christian) colonial expansion. [8] As part of this narrative, it was claimed that when Sultan Selim I captured Cairo in 1517, the last descendant of the Abbasids in Cairo formally passed on the position of caliph to him. [8] This combination thus elevated the sultan's religious or spiritual authority, in addition to his formal political authority. [7] [8]

During this later period, the title of sultan was still used outside the Ottoman Empire as well, as with the examples of the Somali aristocrats, Malay nobles and the sultans of Morocco (such as the Alaouite dynasty founded in the 17th century). [4] It was, however, not used as a sovereign title by Shi'a Muslim rulers. The Safavid dynasty of Iran, who controlled the largest Shi'a Muslim state of this era, mainly used the Persian title Shah, a tradition which continued under subsequent dynasties. The term sultan, by contrast, was mainly given to provincial governors within their realm. [4]

As a feminine form of sultan, used by Westerners, is Sultana or Sultanah and this title has been used legally for some (not all) Muslim women monarchs and sultan's mothers and chief consorts. However, Turkish and Ottoman Turkish also uses sultan for imperial lady, as Turkish grammar—which is influenced by Persian grammar—uses the same words for both women and men. However, this styling misconstrues the roles of wives of sultans. In a similar usage, the wife of a German field marshal might be styled Frau Feldmarschall (similarly, in French, constructions of the type madame la maréchale were historically used for the wives of office-holders). The female leaders in Muslim history are correctly known as "sultanas". However, the wife of the sultan in the Sultanate of Sulu is styled as the "panguian" while the sultan's chief wife in many sultanates of Indonesia and Malaysia are known as "permaisuri", "Tunku Ampuan", "Raja Perempuan", or "Tengku Ampuan". The queen consort in Brunei especially is known as Raja Isteri with the title of Pengiran Anak suffixed, should the queen consort also be a royal princess. 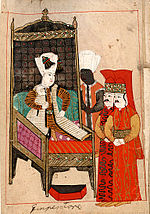 These are generally secondary titles, either lofty 'poetry' or with a message, e.g.:

Sultanates in Anatolia and Central Asia 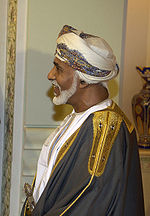 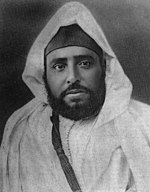 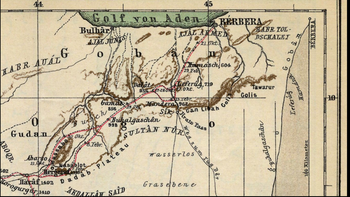 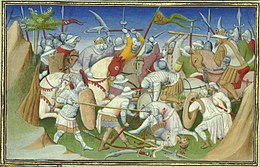 Sultan of Adal and his forces (right) battling the Abyssinian King and his men (Le Livre des Merveilles, 15th century).

Apparently derived from the Arabic malik, this was the alternative native style of the sultans of the Kilwa Sultanate in Tanganyika (presently the continental part of Tanzania). 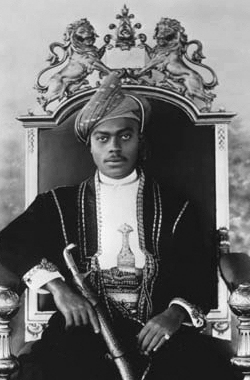 The eighth Sultan of Zanzibar, Ali bin Hamud. Photograph taken between 1902 and 1911.

Mfalume is the (Ki) Swahili title of various native Muslim rulers, generally rendered in Arabic and in western languages as Sultan:

This was the native ruler's title in the Tanzanian state of Uhehe. 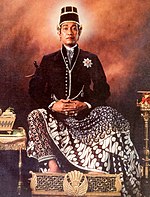 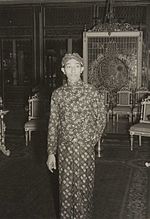 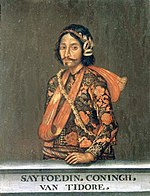 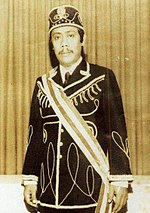 In Indonesia (formerly in the Dutch East Indies):

Sultan with power within Republic 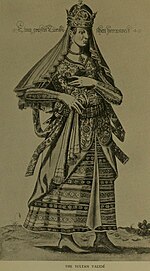 The Valide Sultan (Sultana mother) of the Ottoman Empire

By the beginning of the 16th century, the title sultan was carried by both men and women of the Ottoman dynasty and was replacing other titles by which prominent members of the imperial family had been known (notably khatun for women and bey for men). This usage underlines the Ottoman conception of sovereign power as family prerogative.

Western tradition knows the Ottoman ruler as "sultan", but Ottomans themselves used "padişah" (emperor) or "hünkar" to refer to their ruler. The emperor's formal title consisted of "sultan" together with "khan" (for example, Sultan Suleiman Khan). In formal address, the sultan's children were also entitled "sultan", with imperial princes (Şehzade) carrying the title before their given name, with imperial princesses carrying it after. Example, Şehzade Sultan Mehmed and Mihrimah Sultan, son and daughter of Suleiman the Magnificent. Like imperial princesses, living mother and main consort of reigning sultan also carried the title after their given names, for example, Hafsa Sultan, Suleiman's mother and first valide sultan, and Hürrem Sultan, Suleiman's chief consort and first haseki sultan. The evolving usage of this title reflected power shifts among imperial women, especially between Sultanate of Women, as the position of main consort eroded over the course of 17th century, the main consort lost the title "sultan", which replaced by "kadin", a title related to the earlier "khatun". Henceforth, the mother of the reigning sultan was the only person of non imperial blood to carry the title "sultan". [9]

In Kazakh Khanate a Sultan was a lord from the ruling dynasty (a direct descendants of Genghis Khan) elected by clans, i.e. a kind of princes[ citation needed]. The best of sultans was elected as khan by people at Kurultai[ citation needed]. See ru:Казахские султаны

In a number of post-caliphal states under Mongol or Turkic rule, there was a feudal type of military hierarchy. These administrations were often decimal (mainly in larger empires), using originally princely titles such as khan, malik, amir as mere rank denominations.

In the Persian empire, the rank of sultan was roughly equivalent to that of a modern-day captain in the West; socially in the fifth-rank class, styled ' Ali Jah.