Subaru Telescope (すばる望遠鏡, Subaru Bōenkyō) is the 8.2-meter (320 in) flagship telescope of the National Astronomical Observatory of Japan, located at the Mauna Kea Observatory on Hawaii. It is named after the open star cluster known in English as the Pleiades. It had the largest monolithic primary mirror in the world from its commissioning until 2005. [3]

The Subaru Telescope is a Ritchey-Chretien reflecting telescope. Instruments can be mounted at a Cassegrain focus below the primary mirror; at either of two Nasmyth focal points in enclosures on the sides of the telescope mount, to which light can be directed with a tertiary mirror; or at the prime focus in lieu of a secondary mirror, an arrangement rare on large telescopes, to provide a wide field of view suited to deep wide-field surveys. [4]

Construction of the Subaru telescope began in April 1991, and later that year, a public contest gave the telescope its official name, "Subaru Telescope." Construction was completed in 1998, and the first scientific images were taken in January 1999. [5] In September 1999, Princess Sayako of Japan dedicated the telescope. [6]

A number of state-of-the-art technologies were worked into the telescope design. For example, 261 computer-controlled actuators press the main mirror from underneath, which corrects for primary mirror distortion caused by changes in the telescope orientation. The telescope enclosure building is also shaped to improve the quality of astronomical images by minimizing the effects caused by atmospheric turbulence.

Subaru is one of the few state-of-the-art telescopes to have been used with the naked eye. For the dedication, an eyepiece was constructed so that Princess Sayako could look through it directly. It was enjoyed by the staff for a few nights until it was replaced with the much more sensitive working instruments. [7]

Subaru is the primary tool in the search for Planet Nine. Its large field of view, 75 times that of the Keck telescopes, and strong light-gathering power are suited for deep wide-field sky surveys. The search, split between a research group led by Batygin and Brown and another led by Sheppard and Trujillo, is expected to take up to five years. [8]

Two separate incidents claimed the lives of four workers during the construction of the telescope. On October 13, 1993, 42-year-old Paul F. Lawrence was fatally injured when a forklift tipped over onto him. On January 16, 1996, sparks from a welder ignited insulation which smoldered, generating noxious smoke that killed Marvin Arruda, 52, Ricky Del Rosario, 38, and Warren K. "Kip" Kaleo, 36, and sent twenty-six other workers to the hospital in Hilo. All four workers are memorialized by a plaque outside the base of the telescope dome and a sign posted temporarily each January along the Mauna Kea access road. 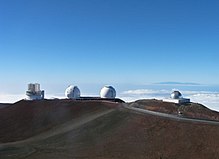 The Subaru alongside the twin W. M. Keck Observatory telescopes and the Infrared Telescope Facility

Several cameras and spectrographs can be mounted at Subaru Telescope's four focal points for observations in visible and infrared wavelengths.

Hyper Suprime-Cam (HSC)
This 900-megapixel ultra-wide-field (1.5° field of view) camera saw first light in 2012, and will be offered for open-use in 2014. [14] The extremely large wide-field correction optics (a seven-element lens with some elements up to a meter in diameter) was manufactured by Canon and delivered March 29, 2011. [15] It will be used for surveys of weak lensing to determine dark matter distribution. [16]
Subaru Coronagraphic Extreme Adaptive Optics (SCExAO)
The Subaru Coronagraphic Extreme Adaptive Optics (SCExAO) instrument is a high-contrast imaging system for directly imaging exoplanets. [17] The coronagraph uses a Phase Induced Amplitude Apodization (PIAA) design which means it will be able to image planets closer to their stars than conventional Lyot type coronagraph designs. For example, at a distance of 100 pc, the PIAA coronagraph on SCExAO would be able to image from 4 AU outwards while Gemini Planet Imager and VLT-SPHERE from 12 AU outwards. [18] The system also has several other types of coronagraph: Vortex, Four-Quadrant Phase Mask and 8-Octant Phase Mask versions, and a shaped pupil coronagraph. [19] The phase I of construction is complete [20] and phase II construction to be complete by end of 2014 [21] for science operations in 2015. SCExAO will initially use the HiCIAO camera but this will be replaced by CHARIS, [22] an integral field spectrograph, around 2016. 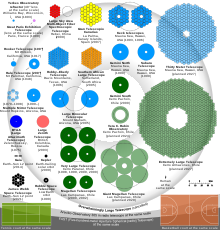