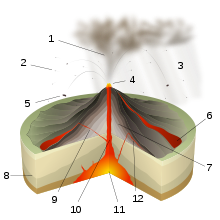 In volcanology, a Strombolian eruption is a type of volcanic eruption with relatively mild blasts, having a Volcanic Explosivity Index of about 1 to 2. [1] Strombolian eruptions consist of ejection of incandescent cinders, lapilli, and lava bombs, to altitudes of tens to a few hundreds of metres. The eruptions are small to medium in volume, with sporadic violence. This type of eruption is named for the Italian volcano Stromboli.

The Italian volcanologist Giuseppe Mercalli studied eruptions at Stromboli and Vulcano in 1888–1890, and observed that the characteristic features of eruptions were different between the two. To distinguish between them, Mercalli defined Strombolian eruptions as "Mildly explosive at discrete but fairly regular intervals of seconds to minutes".[ citation needed]

The tephra typically glows red when leaving the vent, but its surface cools and assumes a dark to black colour and may significantly solidify before impact. The tephra accumulates in the vicinity of the vent, forming a cinder cone. Cinder is the most common product; the amount of volcanic ash is typically rather minor.

The lava flows are more viscous, and therefore shorter and thicker, than the corresponding Hawaiian eruptions; it may or may not be accompanied by production of pyroclastic rock.

Instead the gas coalesces into bubbles, called gas slugs, that grow large enough to rise through the magma column, bursting near the top due to the decrease in pressure and throwing magma into the air. Each episode thus releases volcanic gases, sometimes as frequently as a few minutes apart. Gas slugs can form as deep as 3 kilometers, making them difficult to predict. [2] [3]