From Wikipedia
https://en.wikipedia.org/wiki/Strombidae
Family of molluscs

Strombidae, commonly known as the true conchs, is a taxonomic family of medium-sized to very large sea snails in the superfamily Stromboidea, and the Epifamily Neostromboidae. The term true conchs, being a common name, does not have an exact meaning. It may refer generally to any of the Strombidae [1] but sometimes is used more specifically to include only Strombus and Lambis. [2] The family currently includes 26 extant, and 10 extinct genera.

A live scorpion conch ( Lambis scorpius) in Mayotte. One can see the eyes as well as the scythe-shaped operculum. 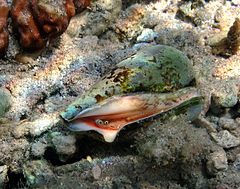 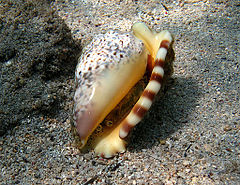 Strombid gastropods live mainly in tropical and subtropical waters. These animals are widespread in the Indo-West Pacific, where most species and genera occur. [3] Nearly 40 of the living species that used to belong to the genus Strombus can be found in the Indo-Pacific region. [4] They also occur in the eastern Pacific and Western Atlantic, and a single species can be found on the African Atlantic coast. [3] Six species of strombids are found in the wider Caribbean region, including the queen conch Aliger gigas, the goliath conch Lobatus goliath, the hawk-wing conch Lobatus raninus, the rooster tail conch Aliger gallus, the milk conch Lobatus costatus, the West Indian fighting conch Strombus pugilis, and the Florida fighting conch Strombus alatus. Until recently, all of these species were placed in the genus Strombus, but now many species are being moved into new genera. [5]

Strombids have long eye stalks. The shell of a strombid has a long and narrow aperture and a siphonal canal. The shell margin has an indentation near the anterior end which accommodates one of the eye stalks. This indentation is called a strombid or stromboid notch. The stromboid notch may be more or less conspicuous, depending on the species. [6] The shells of most species in this family grow a flared lip upon reaching sexual maturity, and they lay eggs in long, gelatinous strands. The genera Strombus and Lambis have many similarities between them, both anatomical and reproductive, though their shells show some conspicuous differences.

Strombids were widely accepted as carnivores by several authors in the 19th century, an erroneous concept that persisted for several decades into the first half of the 20th century. This ideology was probably born in the writings of Lamarck, who classified strombids alongside other supposedly carnivorous snails, and was copied in this by subsequent authors. However, the many claims of those authors were never supported by the observation of animals feeding in their natural habitat. [7] Nowadays, strombids are known to be specialized herbivores and occasional detritivores. They are usually associated with shallow-water reefs and seagrass meadows. [8]

Burrowing behavior, in which an individual sinks itself entirely or partially into the substrate, is also frequent among strombid gastropods. The burrowing process itself, which involves distinct sequential movements and sometimes complex behaviors, is very characteristic of each species. Usually, large strombid gastropods, such as the queen conch Eustrombus gigas and the spider conch Lambis lambis, do not bury themselves, except during their juvenile stages. However, smaller species such as Strombus canarium and Strombus epidromis may bury themselves even after adulthood. [10]

For a long time, all conchs and their allies (the strombids) were classified in only two genera, namely Strombus and Lambis. This classification can still be found in many textbooks and on websites on the internet. Based on molecular phylogeny [8] in addition to an extensively documented fossil record, both genera have been subdivided into several new genera by different authors. [5] [11] [12]

Historically the phylogenetic relationships among the Strombidae have been mainly accessed on two occasions, using two methods. In a 2005 monograph, Simone proposed a cladogram (a tree of descent) based on an extensive morpho anatomical analysis of representatives of the Aporrhaidae, Strombidae, Xenophoridae, and Struthiolariidae. [6] In his analysis, Simone recognized the Strombidae as a monophyletic taxon supported by 13 synapomorphies (traits that are shared by two or more taxa and their most recent common ancestor), comprising at least eight distinct genera. He considered the genus Terebellum as the most basal taxon, distinguished from the remaining strombids by 13 synapomorphies, including a rounded foot. [6] Though the genus Tibia was left out of the analysis, Simone regarded it as probably closely related to Terebellum, apparently due to some well known morphological similarities between them. [6] With the exception of Lambis, the remaining taxa were previously allocated within the genus Strombus. However, according to Simone, only Strombus gracilior, Strombus alatus, and Strombus pugilis, the type species, remained within Strombus, as they constituted a distinct group based on at least five synapomorphies. [6] The remaining taxa were previously considered as subgenera, and were elevated to genus level by Simone in the end of his analysis. The genus Eustrombus (now considered a synonym of Lobatus), [11] in this case, included Eustrombus gigas (now considered a synonym of Lobatus gigas) and Eustrombus goliath (= Lobatus goliath); similarly, the genus Aliger included Aliger costatus (= Lobatus costatus) and Aliger gallus (= Lobatus gallus). [6] [11]

A different approach, this time based on sequences of nuclear histone H3 and mitochondrial cytochrome-c oxidase I (COI) genes was proposed by Latiolais and colleagues in a 2006 paper. The analysis included 32 strombid species that used to, or still belong in the genera Strombus and Lambis. [8]

Several species belonging to numerous genera among the Strombidae are considered economically important. [14] Used as food, fishing bait, tools or simply as decoration, some strombid snail species have been used in human culture for centuries. [15]