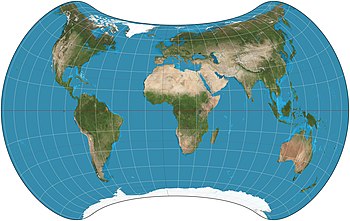 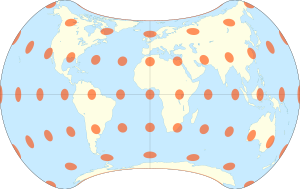 The Strebe 1995 projection with Tissot's indicatrices of distortion. Circles spaced at 30° intervals.

Strebe first presented the projection at a joint meeting of the Canadian Cartographic Association and the North American Cartographic Information Society (NACIS) in August 1994. [2] Its final formulation was completed in 1995. The projection has been available in the map projection software Geocart since Geocart 1.2, released in October 1994. [3]

The projection as described can be formulated as follows: [3]

Strebe's preferred arrangement is to set

, as shown, and 11°E as the central meridian to avoid dividing eastern Siberia's Chukchi Peninsula. However, s can be modified to change the appearance without destroying the equal-area property.