Stewart is a district municipality at the head of the Portland Canal in northwestern British Columbia, Canada [2] near the Alaskan panhandle. In 2011, its population was about 494.

The Nisga'a, who lived around the Nass River, called the head of Portland Canal Skam-A-Kounst, meaning "safe house" or "strong house", probably because it served them as a retreat from the harassment of the Haida and Tlingit from the outer coast. [2] [3] They travelled in the area seasonally to pick berries and hunt birds. It and the rest of the Portland Canal had previously been the domain of the Tsetsaut people, also called the Skam-a-Kounst Indians, or Jits'aawit in Nisga'a, an Athapaskan people who became decimated by war and disease and were driven out of the Stewart area by either Haida or Nisga'a in 1856–57.

The Portland Canal was first explored and named in July 1793 by Captain George Vancouver in honour of William Cavendish-Bentinck, 3rd Duke of Portland (1738–1808), Home Secretary from 1794 to 1801. Vancouver met two friendly native people at the current site of Stewart. [4] The area around the Portland Canal was again explored in 1896 by Captain D.D. Gaillard of the United States Army Corps of Engineers (after whom the Gaillard Cut in the Panama Canal was later named). Two years after Gaillard's visit, the first prospectors and settlers arrived. Among them was D. J. Raine, for whom a creek and a mountain in the area are named. The Stewart brothers arrived in 1902. In 1905, Robert M. Stewart, the first postmaster, named the town Stewart.

Gold and silver mining dominated the early economy. Nearby Hyder, Alaska, boomed with the discovery of rich silver veins in the upper Salmon River basin in 1917 and 1918. Hyder became an access and supply point for the mines, while Stewart served as the port for Canadian mining activity, which was centred on the town of Premier, which was accessed by a 14 miles (23 km) road from Hyder. Other mines in the area were the Jumbo, BC Silver, Red Cliff, and Porter-Idaho. More large camps were south of Stewart at Anyox and Maple Bay. 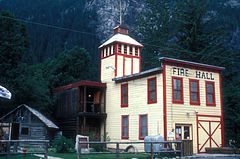 Stewart is accessible by highway from the British Columbia highway system, via Highway 37A, by boat through the Portland Canal, or by air through Stewart Airport.

Stewart has a humid continental climate (Dfb), with about 1,866.8 mm (73.5 in) per year of precipitation, much of it as snow, and an average yearly temperature of 6.1 °C (43.0 °F), according to Environment Canada. [5] Stewart is Canada's most northerly ice-free port. [6] Due to its proximity to the ocean, the climate retains strong maritime influences, with winters being far milder than locations farther inland. With an average of 985 hours of annual sunshine, Stewart is one of the cloudiest places in the world.