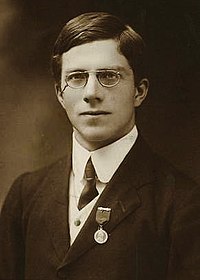 Statistical Methods for Research Workers is a classic book on statistics, written by the statistician R. A. Fisher. It is considered by some to be one of the 20th century's most influential books on statistical methods, together with his The Design of Experiments (1935). It was originally published in 1925, by Oliver & Boyd (Edinburgh); [1] the final and posthumous 14th edition was published in 1970.

Ronald A. Fisher was "interested in application and in the popularization of statistical methods and his early book Statistical Methods for Research Workers, published in 1925, went through many editions and motivated and influenced the practical use of statistics in many fields of study. His Design of Experiments (1935) [promoted] statistical technique and application. In that book he emphasized examples and how to design experiments systematically from a statistical point of view. The mathematical justification of the methods described was not stressed and, indeed, proofs were often barely sketched or omitted altogether ..., a fact which led H. B. Mann to fill the gaps with a rigorous mathematical treatment in his well-known treatise, Mann (1949)." [2]

In the second edition of 1928 a chapter 9 was added: The Principles of Statistical Estimation.