STATES AND TERRITORIES OF AUST ...

States and territories of Australia

The states and territories are federated administrative divisions in Australia, ruled by regional governments that constitute the second level of governance between the federal government and local governments. States are self-governing polities with incomplete sovereign (having ceded some sovereign rights to federation) and have their own constitutions, legislatures, departments, and certain civil authorities (e.g. judiciary and law enforcement) that administer and deliver most public policies and programmes. Territories can be autonomous and administer local policies and programmes much like the states in practice, but are still constitutionally and financially subordinate to the federal government and thus have no true sovereignty.

The Federation of Australia constitutionally consists of six federated states ( New South Wales, Queensland, South Australia, Tasmania, Victoria, and Western Australia) and ten federal territories, out of which three are internal territories (the Australian Capital Territory, Jervis Bay Territory, and Northern Territory) contiguous to the Australian mainland; and the other seven are external territories ( Ashmore and Cartier Islands, Christmas Island, the Cocos (Keeling) Islands, Coral Sea Islands, Heard Island and McDonald Islands, Norfolk Island, and the Australian Antarctic Territory), which are offshore dependent territories. Every state and internal territory (excluding the Jervis Bay Territory, which is a federal district with no autonomy, bundled under the ACT as its exclave in elections and censuses) is self-governing with its own independent executive government, legislative branch, and judicial system, while the rest only have local government status overseen by federal departments.

State and territory governments have executive authority to legislate on matters concerning their citizens, subject to the limits of the federal constitution (notably section 51 and section 109). Each state and internal territory, excluding the Jervis Bay Territory, has its own legislature, although the federal government can override any territorial legislation. The federal High Court of Australia acts as a final court of appeal for all matters and has the authority to override any state judiciary. While all states and internal territories have their own judicial system, which is subject to appeal to the High Court, most external territories are subject to the judiciary and legislature of either a state or internal territory. Excluding the Heard Island and McDonald Islands and the Australian Antarctic Territory (which are governed by the Department of Agriculture, Water and the Environment), the external territories are governed by the federal Department of Infrastructure, Transport, Regional Development and Communications. [1]

Each state of Australia is a successor to historical British colonies and each has its own state/territorial constitution. The Australian Capital Territory (ACT) and Northern Territory for the most part operate indistinguishably from the states, even though they do not have constitutional status as states. The Jervis Bay Territory is considered an exclave of the ACT for almost all purposes. Until 2015, Norfolk Island was also a self-governing territory like the ACT.

Surrounded by the Indian, Pacific, and (disputedly) Southern oceans, Australia is separated from Maritime Southeast Asia and New Guinea by the Arafura Sea, Timor Sea, and Torres Strait, from the Melanesian islands by the Coral Sea, and from New Zealand by the Tasman Sea. The world's smallest continent, Australia is also the sixth largest country by land area and sometimes considered the world's largest island. Australia has a mainland coastline of 34,218 kilometres (21,262 mi) and claims an Exclusive Economic Zone of 8,148,250 square kilometres (3,146,060 sq mi).[ citation needed] 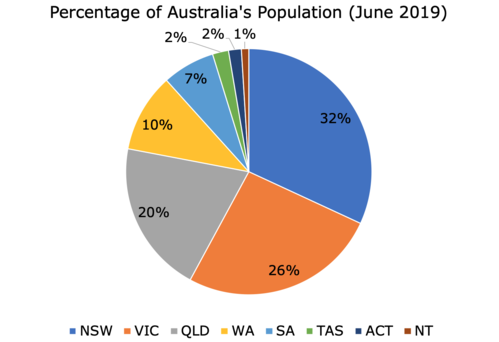 The Cocos (Keeling) Islands voted for integration in 1984. Together with Christmas Island, Commonwealth laws apply automatically to the territory unless expressly stated otherwise [10] and residents of both external territories are associated with Northern Territory for federal elections. They are, thus, constitutionally part of Australia.

The Heard Island and McDonald Islands, although uninhabited, are treated as constitutionally part of Australia by the central government. [11]

The constitutional status of the Australian Antarctic Territory is unclear, with successive governments treating it either as a separate territory (as in Norway and the United Kingdom) or an integral part of the country (as in France and New Zealand). As of 2018 [update], the present government appears to take the view that it is not constitutionally a part of Australia. [12]

Norfolk Island's status is controversial, with the present (as of 2018 [update]) government taking measures to integrate the territory into Australia proper (including representation in parliament and compulsory voting). The Norfolk Islanders have not formally consented to this change in constitutional status and assert that they are not Australian. [13]

Two internal territories established by the Australian federal government under Section 122 of the Constitution of Australia no longer exist:

Two present-day Oceanic countries, Papua New Guinea (PNG) and Nauru, were administered by the federal government of Australia as de facto and/or de jure external territories for differing periods between 1902 and 1975.

Nauru was previously under the German colonial empire as part of the German New Guinea. Following World War I, the Australian government received a League of Nations mandate for Nauru. After World War II, the Territory of Papua, Territory of New Guinea and Nauru were all controlled by the Australian government as United Nations trust territories. Nauru was granted independence in 1968.

The majority of Australians live in the east coast states of New South Wales, Queensland, Victoria, and the Australian Capital Territory, which have around three-quarters of the Australian population. Most of the major population centres are located east and south of the Great Dividing Range on the coastal plains and their associated hinterland regions.

The states originated as separate British colonies prior to Federation in 1901. The Colony of New South Wales was founded in 1788 and originally comprised much of the Australian mainland, as well as Lord Howe Island, New Zealand, Norfolk Island, and Van Diemen's Land, in addition to the area currently referred to as the state of New South Wales. During the 19th century, large areas were successively separated to form the Colony of Tasmania (initially established as a separate colony named Van Diemen's Land in 1825), the Colony of Western Australia (initially established as the smaller Swan River Colony in 1829), the Province of South Australia (1836), the Colony of New Zealand (1840), [34] the Victoria Colony (1851) and the Colony of Queensland (1859). Upon Federation, the six colonies of New South Wales, Victoria, Queensland, South Australia, Western Australia, and Tasmania became the founding states of the new Commonwealth of Australia. 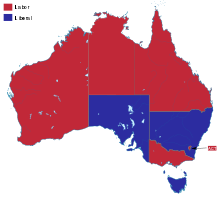 Map showing the states and territories of Australia by governing political party, as of October 2020

Most of the territories are directly administered by the Commonwealth Government, while two (the Northern Territory and the Australian Capital Territory) have some degree of self-government although less than that of the states. In the self-governing territories, the Australian Parliament retains the full power to legislate, and can override laws made by the territorial institutions, which it has done on rare occasions. For the purposes of Australian (and joint Australia-New Zealand) intergovernmental bodies, the Northern Territory and the Australian Capital Territory are treated as if they were states.

The external territory of Norfolk Island possessed a degree of self-government from 1979 until 2015.

Each state has a bicameral parliament except Queensland, which abolished its upper house in 1922. The lower house is called the Legislative Assembly, except in South Australia and Tasmania, where it is called the House of Assembly. Tasmania is the only state to use proportional representation for elections to its lower house; all others elect members from single member constituencies, using preferential voting. The upper house is called the Legislative Council and is generally elected from multi-member constituencies using proportional representation. The three self-governing territories, the ACT, the Northern Territory, and Norfolk Island, each have unicameral Legislative Assemblies.

The head of government of each state is called the premier, appointed by the state's Governor. In normal circumstances, the Governor will appoint as premier whoever leads the party or coalition which exercises control of the lower house (in the case of Queensland, the only house) of the state Parliament. However, in times of constitutional crisis, the Governor can appoint someone else as Premier. The head of government of the self-governing internal territories is called the chief minister. The Northern Territory's chief minister, in normal circumstances whoever controls the Legislative Assembly, is appointed by the administrator.

The term "interstate" is used within Australia to refer to a number of events, transactions, registrations, travel, etc. which occurs across borders or outside of the particular state or territory of the user of the term. Examples of use include motor vehicle registration, [39] travel, [40] applications to educational institutions out of one's home state. [41]

Main article: Premiers and chief ministers of the Australian states and territories

Main article: Parliaments of the Australian states and territories