From Wikipedia
https://en.wikipedia.org/wiki/Square_(algebra)
Result of multiplying a number, or other expression, by itself
"²" redirects here. For typography of superscripts, see subscript and superscript. 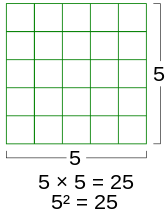 In mathematics, a square is the result of multiplying a number by itself. The verb "to square" is used to denote this operation. Squaring is the same as raising to the power  2, and is denoted by a superscript 2; for instance, the square of 3 may be written as 32, which is the number 9. In some cases when superscripts are not available, as for instance in programming languages or plain text files, the notations x^2 or x**2 may be used in place of x2.

The adjective which corresponds to squaring is quadratic.

The square of an integer may also be called a square number or a perfect square. In algebra, the operation of squaring is often generalized to polynomials, other expressions, or values in systems of mathematical values other than the numbers. For instance, the square of the linear polynomial x + 1 is the quadratic polynomial (x + 1)2 = x2 + 2x + 1. 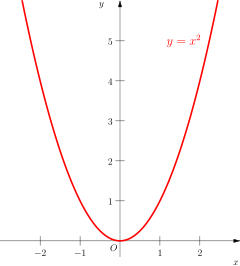 The graph of the square function y = x2 is a parabola.

The squaring operation defines a real function called the square function or the squaring function. Its domain is the whole real line, and its image is the set of nonnegative real numbers.

The square function preserves the order of positive numbers: larger numbers have larger squares. In other words, the square is a monotonic function on the interval [0, +∞). On the negative numbers, numbers with greater absolute value have greater squares, so the square is a monotonically decreasing function on (−∞,0]. Hence, zero is the (global) minimum of the square function. The square x2 of a number x is less than x (that is x2 < x) if and only if 0 < x < 1, that is, if x belongs to the open interval (0,1). This implies that the square of an integer is never less than the original number x.

There are several major uses of the square function in geometry.

The name of the square function shows its importance in the definition of the area: it comes from the fact that the area of a square with sides of length  l is equal to l2. The area depends quadratically on the size: the area of a shape n times larger is n2 times greater. This holds for areas in three dimensions as well as in the plane: for instance, the surface area of a sphere is proportional to the square of its radius, a fact that is manifested physically by the inverse-square law describing how the strength of physical forces such as gravity varies according to distance. 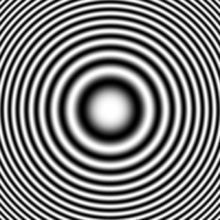 The square function is related to distance through the Pythagorean theorem and its generalization, the parallelogram law. Euclidean distance is not a smooth function: the three-dimensional graph of distance from a fixed point forms a cone, with a non-smooth point at the tip of the cone. However, the square of the distance (denoted d2 or r2), which has a paraboloid as its graph, is a smooth and analytic function.

The dot product of a Euclidean vector with itself is equal to the square of its length: v⋅v = v2. This is further generalised to quadratic forms in linear spaces via the inner product. The inertia tensor in mechanics is an example of a quadratic form. It demonstrates a quadratic relation of the moment of inertia to the size ( length).

There are infinitely many Pythagorean triples, sets of three positive integers such that the sum of the squares of the first two equals the square of the third. Each of these triples gives the integer sides of a right triangle.

In abstract algebra and number theory

The square function is defined in any field or ring. An element in the image of this function is called a square, and the inverse images of a square are called square roots.

More generally, in rings, the square function may have different properties that are sometimes used to classify rings.

. Both notions are important in algebraic geometry, because of Hilbert's Nullstellensatz.

An element of a ring that is equal to its own square is called an idempotent. In any ring, 0 and 1 are idempotents. There are no other idempotents in fields and more generally in integral domains. However, the ring of the integers modulo n has 2k idempotents, where k is the number of distinct prime factors of n. A commutative ring in which every element is equal to its square (every element is idempotent) is called a Boolean ring; an example from computer science is the ring whose elements are binary numbers, with bitwise AND as the multiplication operation and bitwise XOR as the addition operation.

In a supercommutative algebra where 2 is invertible, the square of any odd element equals zero.

If A is a commutative semigroup, then one has

In the language of quadratic forms, this equality says that the square function is a "form permitting composition". In fact, the square function is the foundation upon which other quadratic forms are constructed which also permit composition. The procedure was introduced by L. E. Dickson to produce the octonions out of quaternions by doubling. The doubling method was formalized by A. A. Albert who started with the real number field ℝ and the square function, doubling it to obtain the complex number field with quadratic form x2 + y2, and then doubling again to obtain quaternions. The doubling procedure is called the Cayley–Dickson construction, and has been generalized to form algebras of dimension 2n over a field F with involution.

In complex numbers and related algebras over the reals

The ordinary complex square function z2 is a twofold cover of the complex plane, such that each non-zero complex number has exactly two square roots. This map is related to parabolic coordinates.

The absolute square of a complex number is the product z* z involving its complex conjugate. [1] [2] [3] [4] [5] [6] [7] [8] It is also known as modulus squared or magnitude squared, after the real-value square of the complex-number modulus ( magnitude or absolute value), |z|2. It equals the sum of real-valued squares of the complex number's real and imaginary parts,

. It can be generalized to vectors as the complex dot product.

The squared modulus is applied in signal processing, to relate the Fourier transform and the power spectrum, and also in quantum mechanics, relating probability amplitudes and probability densities.

Squares are ubiquitous in algebra, more generally, in almost every branch of mathematics, and also in physics where many units are defined using squares and inverse squares: see below.

Least squares is the standard method used with overdetermined systems.

Squaring is used in statistics and probability theory in determining the standard deviation of a set of values, or a random variable. The deviation of each value xi from the mean

of the set is defined as the difference