From Wikipedia
https://en.wikipedia.org/wiki/Spherical_bearing
A bearing that allow limited angular rotation orthogonal to the shaft axis 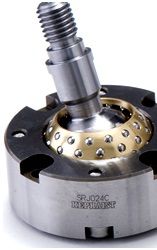 Spherical bearing with rolling elements at the contact surface

A spherical plain bearing is a bearing that permits angular rotation about a central point in two orthogonal directions (usually within a specified angular limit based on the bearing geometry). Typically these bearings support a rotating shaft in the bore of the inner ring that must move not only rotationally, but also at an angle.

Self-aligning spherical bearings were first used by James Nasmyth around 1840 to support line shaft bearings in mills and machine shops. [1] For long shafts it was impossible to accurately align bearings, even if the shaft was perfectly straight. Nasmyth used brass bearing shells between hemispherical brass cups to align the bearings to self-align.

Spherical bearings can be of a hydrostatic or mechanical construction. A spherical bearing by itself consists of an outer ring and an inner ring and a locking feature that makes the inner ring captive within the outer ring in the axial direction only. The outer surface of the inner ring and the inner surface of the outer ring are spherical and are collectively considered the raceway and they slide against each other, either with a lubricant, a maintenance-free (typically polytetrafluoroethylene or PTFE) based liner, or they incorporate a rolling element such as a race of ball-bearings, allowing lower friction.