From Wikipedia
https://en.wikipedia.org/wiki/SpaceX_Crew-2
Second operational flight in NASA's Commercial Crew Program, carrying astronauts to the International Space Station
Not to be confused with Crew Dragon Demo-2.

German astronaut Matthias Maurer was the backup for Pesquet, while Japanese astronaut Satoshi Furukawa trained as backup to Hoshide. [5] [6] 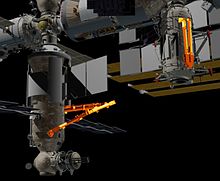 SpaceX Crew-2 arrived at the ISS on 24 April 2021, well ahead of the launch and docking of the Nauka module launching on a Proton-M launch vehicle on 15 July 2021 that will carry a portion of the European Robotic Arm (ERA). Expedition 65 crew members will oversee the installation of Nauka and the ERA on the ISS. [7]

Megan McArthur of the Crew-2 mission seen using the same seat that her husband, Bob Behnken, used for the Crew Dragon Demo-2 mission

The second SpaceX operational mission in the Commercial Crew Program launched on 23 April 2021. [8] [9] The Crew Dragon Endeavour (C206), will dock to the International Docking Adapter (IDA) on the Harmony module. This mission is the first with astronauts onboard with a previously used booster rocket. [10] [11]

All crew are veteran astronauts, though this is Megan McArthur's first visit to the ISS (as her first spaceflight was a shuttle mission to the Hubble Space Telescope). Alongside the three other crew members, Megan McArthur is using the same seat of the SpaceX Crew Dragon Endeavour in this mission which her husband, Bob Behnken, used in SpaceX Demo-2 mission, the first mission of the Endeavour capsule. [12] Akihiko Hoshide will serve as the second Japanese ISS commander during his stay. [4] It is the second mission by Thomas Pesquet to the International Space Station and will be called Alpha, after Alpha Centauri, the closest star system to Earth, following the French tradition to name space missions after stars or constellations. [5]