From Wikipedia
(Redirected from Southern Celestial Hemisphere)
https://en.wikipedia.org/wiki/Southern_Celestial_Hemisphere
Southern half of the celestial sphere 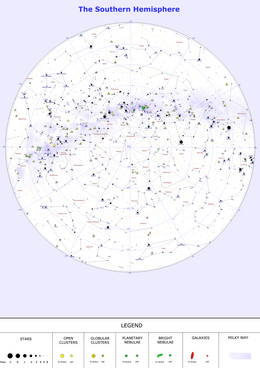 A star chart of the entire Southern Sky, centered on the south celestial pole

The southern celestial hemisphere, also called the Southern Sky, is the southern half of the celestial sphere; that is, it lies south of the celestial equator. This arbitrary sphere, on which seemingly fixed stars form constellations, appears to rotate westward around a polar axis due to Earth's rotation.

At any given time, the entire Southern Sky is visible from the geographic South Pole, while less of this hemisphere is visible the further north the observer is located. The northern counterpart is the northern celestial hemisphere.

Earth rotating within the celestial sphere. In this view, the Southern Celestial Hemisphere is below the celestial equator, the middle parallel (in cyan).

In the context of astronomical discussions or writing about celestial mapping, it may also simply then be referred to as the Southern Hemisphere. 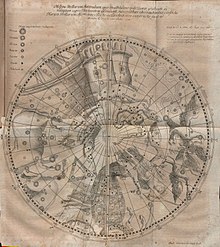 Early 17th century representation of the southern celestial hemisphere in a table from Acta Eruditorum, 1713

The brightest stars are all larger than the Sun.[ dubious – discuss] Sirius in the constellation of Canis Major has the brightest apparent magnitude of –1.46; it has a radius twice that of the Sun and is 8.6 light-years away. Canopus and the next fixed star Toliman ( α Centauri), 4.2 light-years away, are also located in the Southern Sky, having declinations around –60° – too close to the south celestial pole that neither are visible from Central Europe. [1]