The South Korean won ( /wʌn/; [3] Korean: 원, Korean pronunciation:  [wʌn]; symbol: ₩; code: KRW) or Korean Republic won ( Korean: 대한민국 원) is the official currency of South Korea. A single won is divided into 100 jeon, the monetary subunit. The jeon is no longer used for everyday transactions, and appears only in foreign exchange rates. The won is issued by the Bank of Korea, based in the capital city of Seoul.

The old "won" was a cognate of the Chinese yuan and Japanese yen. It is derived from the hanja 圓 (원, won), meaning "round". The won was subdivided into 100 jeon ( Korean: 전; Hanja: 錢; RR: jeon; MR: chŏn), itself a cognate of the Chinese unit of weight mace and synonymous with money in general. The current won (1962 to present) is written in hangul only and does not officially have any hanja associated with it. [1] [2]

During the colonial era under the Japanese (1910–45), the won was replaced by the Korean yen which was at par with the Japanese Yen.

After World War II ended in 1945, Korea was divided, resulting in two separate currencies, both called won, for the South and the North. Both the Southern won and the Northern won replaced the yen at par. The first South Korean won was subdivided into 100 jeon.

The South Korean won initially had a fixed exchange rate to the U.S. dollar at a rate of 15 won to 1 dollar. A series of devaluations followed, the later ones, in part, due to the Korean War (1950–53). The pegs were:

On February 27, 1980, efforts were initiated to lead to a floating exchange rate. The won was finally allowed to float on December 24, 1997, when an agreement was signed with the International Monetary Fund. [6] Shortly after, the won was devalued to almost half of its value, as part of the 1997 Asian financial crisis.

The Bank of Korea announced in early 2006 its intention to redesign the 10 won coin by the end of that year. With the increasing cost of production, then at 38 won per 10 won coin, and rumors that some people had been melting the coins to make jewelry, the redesign was needed to make the coin more cost-effective to produce. [12] The new coin is made of copper-coated aluminium with a reduced diameter of 18 mm, and a weight of 1.22 g. Its visual design is the same as the old coin. [13] The new coin was issued on December 18, 2006. [14] [15]

The 1 and 5 won coins are rarely in circulation since 1992, and prices of consumer goods are rounded to the nearest 10 won. However, they are still in production, minting limited amounts of these two coins every year, for the Bank of Korea's annual mint sets. [16] In 1998, the production costs per coin were: 10 won coins each cost 35 won to produce, 100 won coins cost 58 won, and 500 won coins cost 77 won. [17]

The Bank of Korea designates banknote and coin series in a unique way. Instead of putting those of similar design and issue dates in the same series, it assigns series number X to the Xth design of a given denomination. The series numbers are expressed with Korean letters used in alphabetical order, e.g. 가, 나, 다, 라, 마, 바, 사. Therefore, ₩1,000 issued in 1983 is series II (나) because it is the second design of all ₩1,000 designs since the introduction of the South Korean won in 1962.

With the economic development from the 1960s, the value of the 500 won notes fell, resulting in a greater use of cashier's checks with higher fixed denominations as means of payment, as well as an increased use of counterfeited ones. [7] In 1970, the 100 won notes were replaced by coins, with the same happening to the 50 won notes in 1972.

Higher-denomination notes of 5,000 and 10,000 won were introduced in 1972 and 1973, respectively. The notes incorporated new security features, including watermark, security thread, and ultraviolet response fibres, and were intaglio printed. The release of 10,000 won notes was planned to be at the same time as the 5,000 won notes, but problems with the main theme delayed it by a year. [18] Newly designed 500 won notes were also released in 1973, and the need for a medium denomination resulted in the introduction of 1,000 won notes in 1975.

In 1982, the 500 won note was replaced by a coin. The following year, as part of its policy of rationalizing the currency system, the Bank of Korea issued a new set of notes, as well as a new set of coins. Some of the notes' most notable features were distinguishable marks for the blind under the watermark and the addition of machine-readable language in preparation for mechanization of cash handling. They were also printed on better-quality cotton pulp to reduce the production costs by extending their circulation life. [7]

To cope with the deregulation of imports of color printers and the increasing use of computers and scanners, modified 5,000 and 10,000 won notes were released between 1994 and 2002 with various new security features, which included color-shifting ink, microprint, segmented metal thread, moiré, and EURion constellation. The latest version of the 5,000 and 10,000 won notes are easily identifiable by the copyright information inscribed under the watermark: "© 한국은행" and year of issue on the obverse, "© The Bank of Korea" and year of issue on the reverse.

With the release of a new set of notes, no plan has yet been made to withdraw these notes from circulation. [21]

In 2006, it became a major concern that the South Korean won banknotes were being counterfeited/forged. Notably, around 50% of 5,000 won notes (worth about US$5) were confiscated as counterfeit.[ citation needed] This led the government to issue a new series of banknotes, with the 5,000 won note being the first one to be redesigned. Later in 2007, the 1,000 and 10,000 won notes were introduced.

New 100,000 won notes were also announced, but their release was later cancelled due to the controversy over the banknote's planned image, featuring the Daedongyeojido map, and not including the disputed Dokdo islands. [25] [26] [27] [28]

For the first time in the world, KOMSCO, the Korean mint, inserted a new substance in the notes to detect counterfeits. This technique is being exported to Europe, North America, etc. [29]

Future of the South Korean won

The Bank of Korea is the only institution in South Korea with the right to print banknotes and mint coins. The banknotes and coins are printed at the KOMSCO, a government-owned corporation, under the guidance of the Bank of Korea. After the new banknotes and coins are printed/minted, they are bundled or rolled and shipped to the headquarters of the Bank of Korea. When delivered, they are deposited inside the bank's vault, ready to be distributed to commercial banks when requested. Every year, around Seollal and Chuseok, two major Korean holidays, the Bank of Korea distributes large amounts of its currency to most of the commercial banks in South Korea, which are then given to their customers upon request. 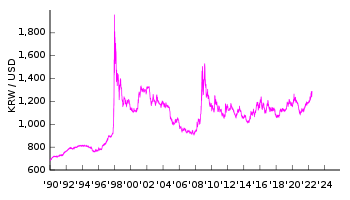