From Wikipedia
https://en.wikipedia.org/wiki/South_China
Not to be confused with Southern China, South Central China, Southeast China, or Southwest China.
For other uses, see South China (disambiguation).
Geographical and cultural region 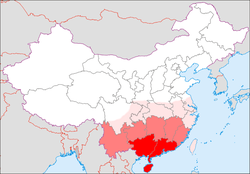 South China ( simplified Chinese: 华南; traditional Chinese: 華南; pinyin: Huánán; lit. ' Huaxia-south') is a geographical and cultural region that covers the southernmost part of China. Its precise meaning varies with context. A notable feature of South China in comparison to the rest of China is that most of its citizens are not native speakers of Mandarin Chinese. Cantonese is the most common language in the region while the Guangxi region contains the largest concentration of China's ethnic minorities, each with their own language.

Cities with urban area over one million in population