From Wikipedia
https://en.wikipedia.org/wiki/South_American_Pacific_mangroves
ecoregion along the Pacific coast of Panama, Colombia, Ecuador and Peru.

The South American Pacific mangroves, or Panama Bight mangroves, is an ecoregion along the Pacific coast of Panama, Colombia, Ecuador and Peru. 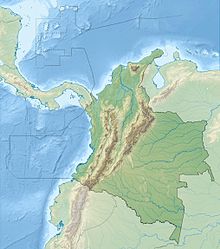 The mangroves of the Pacific coast deltas of South American are fed by streams with steep slopes in their catchment areas, which have high levels of rainfall. These streams carry high loads of sediment. The coast is subsiding at about 0.6 millimetres (0.024 in) per year, and global warming will increase sea levels, but will probably also to increase rainfall on the Pacific coast. The fresh sediments should therefore maintain the surface elevation of the mangroves. [8]

The ecoregion is in the Neotropical realm, in the mangroves biome. [1] Mangroves extend along the Pacific coast south to 5°32' at the estuary of the Piura River in the north of Peru. South of that the cold Humboldt Current causes high soil salinity and very arid conditions, with hardly any fresh water streams. This is an inhospitable environment for mangroves, particularly during El Niño years. [12]

49 families of vascular plants have been identified in the Pacific coast mangroves, with 135 genera and 222 species. A 2014 book proposed a distinction between the Chocoan and Equatorial-Pacific mangrove forests. [13] Endemic species such as Avicennia tonduzi and Avicennia bicolor are found in the Pacific mangroves. [12] More than 70% of Colombia's mangroves grow on the Pacific coast. They form tall, well-structured forests with trees up to 30 metres (98 ft) high. [14] The southernmost stands of mangroves in the Virrila and Piura estuaries hold only black mangroves ( Avicennia germinans). Between 1987 and 2014 these stands have grown substantially, but have not spread along the coast. [15]

In Ecuador about 40,000 hectares (99,000 acres) of mangroves were lost in the 1980s and early 1990s due to unsustainable shrimp pond development. Since then the mangroves have been slowly recovering, and seem stable. [17] Part of the ecoregion is protected by the Barro Colorado Island Natural Monument. [1]