From Wikipedia
https://en.wikipedia.org/wiki/Songs_Without_Words
Not to be confused with Moonchild: Songs Without Words.

Songs Without Words (Lieder ohne Worte) is a series of short lyrical piano songs by the Romantic composer Felix Mendelssohn, written between 1829 and 1845. His sister Fanny Mendelssohn and other composers also wrote pieces in the same genre.

The eight volumes of Songs Without Words, each consisting of six songs ( Lieder), were written at various points throughout Mendelssohn's life, and were published separately. The piano became increasingly popular in Europe during the early nineteenth century, when it became a standard item in many middle-class households. The pieces are within the grasp of pianists of various abilities and this undoubtedly contributed to their popularity. This great popularity has caused many critics to under-rate their musical value.[ citation needed]

The first volume was published by Novello in London (1832) as Original Melodies for the Pianoforte, but the later volumes used the title Songs Without Words. [1]

The works were part of the Romantic tradition of writing short lyrical pieces for the piano, although the specific concept of "Songs Without Words" was new. Mendelssohn's sister Fanny wrote a number of similar pieces (though not so entitled) and, according to some music historians, she may have helped inspire the concept. The title Song Without Words seems to have been Felix Mendelssohn's own invention. In 1828, Fanny wrote in a letter "My birthday was celebrated very nicely ... Felix has given me a 'song without words' for my album (he has lately written several beautiful ones)." [1]

Mendelssohn himself resisted attempts to interpret the songs too literally, and objected when his friend Marc-André Souchay sought to put words to them to make them literal songs:

What the music I love expresses to me, is not thought too indefinite to put into words, but on the contrary, too definite. (Mendelssohn's own italics) [2]

Mendelssohn also wrote other Songs Without Words not collected in volumes, and published only in recent years. Furthermore, original drafts exist for many of the 'Songs' many of which differ quite substantially from the eventually published versions. [3] In 2008, the Italian pianist Roberto Prosseda recorded a collection of Mendelssohn's Songs Without Words for Decca Records totalling 56 Lieder, some of them never recorded before.

The titles attributed to some of the songs below were given by Mendelssohn himself. [4][ failed verification] Other fanciful titles were given to certain of them by later publishers but have no authority and do not reflect any intention of the composer.

Song number 2 was written for his sister Fanny to celebrate the birth of her son in 1830. [1]

Song number 6 was given the title Duetto by Mendelssohn, since two melodies were written to represent two singers. It was composed in Frankfurt in June 1836, soon after he had met his future wife. [1] 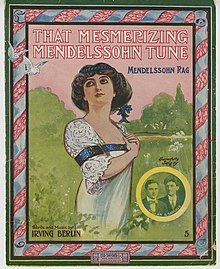 Book 4 was dedicated to Sophia Horsley. [1]

Song No. 6 "Spring Song" was also sometimes known in England as " Camberwell Green", being the place in London where Mendelssohn composed it while staying with the Benneckes, relatives of his wife. [1]

Book 5 was dedicated to Clara Schumann. [1]

The Spinnerlied has also been given the nickname the "Bee's Wedding" since the busy accompaniment to the melody resembles the buzzing of bees.

Book 6 was dedicated to Sophie Rosen. [1]

This book, and Book 8, were published posthumously.

A piece in D major for cello and piano, written by Mendelssohn around 1845 for cellist Lisa Cristiani, was published for the first time after his death. It was designated Opus 109 and entitled Song Without Words. It is not related to any of the piano pieces. [6] Cellist Carlos Prieto called the piece "an exquisite composition, worthy of the finest pieces Mendelssohn ever composed for this genre." [7]

Mendelssohn made piano duet arrangements of a number of the songs, namely those that became Book 5 and the first song of Book 6, which he presented to Queen Victoria in 1844. [10] Mendelssohn was also aware of arrangements of some of the earlier Lieder for piano duet by Carl Czerny. [11] Many others have made various arrangements of individual songs, including for orchestra, chamber ensemble, or solo instrument with piano accompaniment. One such example is the arrangement of 22 of the songs by Mendelssohn's student, the German violist Friedrich Hermann (1828–1907), for violin and piano. [12]

In 1834, Franz Liszt wrote his Grosses Konzertstück über Mendelssohns Lieder ohne Worte (Grand Concert Piece on Mendelssohn's Songs Without Words) for 2 pianos. This was based on songs 1–3 of Book I, Op. 19b. [13] Liszt and a student, Mlle. Vial, started to play it in Paris on 9 April 1835 [14] but Liszt became ill during the performance. Ferruccio Busoni planned to play it in London with Egon Petri, but died before the plan could be realised. It was finally first performed in full by Richard and John Contiguglia at the 1984 Holland Liszt Festival in Utrecht. [15]

There are also examples of recordings of transcriptions, for solo instrument and piano accompaniment, of Mendelssohn lieder written for the voice, which have been entitled "Songs Without Words", for instance by Mischa Maisky. No such arrangements were however made, or so titled, by Mendelssohn himself.

Other composers who were inspired to produce similar sets of pieces of their own included Charles-Valentin Alkan (the five sets of Chants, each ending with a barcarolle), Anton Rubinstein, Ignaz Moscheles and Edvard Grieg (his 66 Lyric Pieces). Two Songs Without Words (Op. 10) for piano were also written by Mykola Lysenko.

Both Alkan and Rubinstein frequently included items from Mendelssohn's Songs in their recitals. Ferruccio Busoni, who considered Mendelssohn "a master of undisputed greatness", turned to the Songs Without Words in the last year of his life for a projected series of recitals in London.