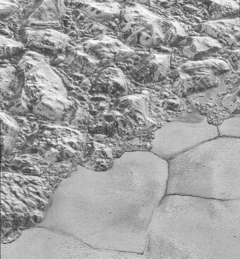 Solid nitrogen is the solid form of the element nitrogen. It is an important component of the surfaces of Pluto [1] and outer moons of the Solar System such as Neptune's Triton. [2] Under low or moderate pressure solid nitrogen contains dinitrogen molecules held together by London dispersion forces. [3] At standard atmospheric pressure for Earth, this solid melts at 63.23 K, [4] but this is not true at other pressures. Non-molecular forms of solid nitrogen produced by extreme pressures have a higher energy density than any other non-nuclear material. [5]

Solid nitrogen has several properties relevant to its formation of rocks in the outer Solar System. Even at the low temperatures of solid nitrogen it is fairly volatile and can sublime to form an atmosphere, or condense back into nitrogen frost. At 58 K the ultimate compressive strength is 0.24  MPa. Strength increases as temperature lowers becoming 0.54 MPa at 40.6 K. Elastic modulus varies from 161 to 225 MPa over the same range. [9] Compared to other materials, solid nitrogen loses cohesion at low pressures and flows in the form of glaciers when amassed. Yet its density is higher than that of water ice, so the forces of buoyancy will naturally transport blocks of water ice towards the surface. This effect has been most clearly observed on Pluto (by the New Horizons space probe in 2015), where water ice makes up a major part of the surface layers as icebergs on top of nitrogen ice. [10]

Solid nitrogen mixes with solid carbon monoxide and methane on the surface of Pluto. [10]

The bulk modulus of s-N2 is 2.16 GPa at 20 K, and 1.47 GPa at 44 K. [3] At temperatures below 30 K solid nitrogen will undergo brittle failure, particularly if strain is applied quickly. Above this temperature the failure mode is ductile failure. Dropping 10 K makes the solid nitrogen 10 times as stiff. [3]

In the β phase, the molecule centres are hexagonal close packed. This means that the c/a ratio is ≈ 1.633 = √8/3. The nitrogen molecules are randomly tipped at an angle of 55° from the c-axis. There is a strong quadrupole-quadrupole interaction between the molecules. [19]

The nitrogen molecules are located on the body diagonals of the unit cell cube. [19]

In the phase diagram ε-N2 appears at pressures above 2 GPa at temperatures below 50 K. Below this the γ form is stable. When heated ε-N2 transforms to δ-N2 [24]

A ζ-N2 phase compressed to 95 GPa and then heated to over 600 K produces a new structure called θ nitrogen which has a uniform translucent appearance. [25]

When the ζ-N2 phase is compressed at room temperature over 150 GPa an amorphous form is produced. [5] This is designated as the μ-phase. It is a narrow gap semiconductor. The μ-phase has been brought to atmospheric pressure by first cooling it to 100 K. [28]

η-N is a semiconducting amorphous form of nitrogen. It is formed at pressures between 80 and 270 GPa, and temperatures 10 to 510K. In reflected light it appears black, but does transmit some red or yellow light. In the infrared there is an absorption band around 1700 cm−1. It does not contain N2 molecules. Under even higher pressure of 280 Gpa, it transforms into a metal. [29]

Under pressures higher than 110 GPa and temperatures around 2000 K nitrogen forms a network solid, bound by single covalent bonds in what is called a cubic-gauche structure, abbreviated as cg-N. This substance is very stiff with a bulk modulus around 298 GPa, similar to diamond. [30] It is very high-energy. [31] The cubic-gauche form has space group I213. [22] The unit cell edge is 3.805 Å. [22] There are eight nitrogen atoms per unit cell. [22] The bond angles are very close to tetrahedral. The structure contains rings of nitrogen atoms that are fused together. The position of the lone pairs of electrons is ranged so that their overlap is minimised. [28] The difference in bond energy varies from 0.83 eV per atom in nitrogen gas to 4.94 eV per atom, so having a difference in energy of over 4 eV per atom. This cubic-gauche nitrogen is the highest energy non-nuclear material and is being investigated for use in explosives and rocket fuel. [5] Estimates of its energy density vary: a value of 33 kJ g−1 is predicted, which is over three times the energy density of HMX. [32] A more recent predicted value is 10.22 kJ g−1 which, while much lower, is still more than 60% more than HMX. [33] cg-N has all bonds the same length [5] of 1.346 Å at 115 GPa. [30] The cubic-gauche structure for nitrogen is predicted [34] to have bond lengths of 1.40 Å, bond angles of 114.0° and dihedral angles of −106.8°. The term gauche refers to the odd dihedral angles, if it were 0° it would be called cis, and if 180° it would be called trans. The dihedral angle Φ is related to the bond angle θ by sec(Φ) = sec(θ) − 1. The coordinate of one atom in the unit cell at x,x,x also determines the bond angle by cos(θ) = x(x-1/4)/(x2+(x-1/4)2). [34]

Another network solid nitrogen called poly-N and abbreviated pN was predicted in 2006. [22] pN has space group C2/c and cell dimensions a = 5.49 Å, β = 87.68°. Other higher pressure polymeric forms are predicted in theory, and a metallic form is expected if the pressure is high enough. [35]

When compressing nitrogen to pressures between 120 and 180 GPa and temperatures above 4000 °C, [36] [37] it adopts a crystal structure identical to that of black phosphorus (orthorhombic, Cmce space group), hence coined as black phosphorus nitrogen (bp-N) or simply black nitrogen. [38] Like black phosphorus, it is an electrical conductor. [39] The formation of the bp-N structure brings nitrogen in line with heavier pnictogen elements, and reaffirms the trend that elements at high pressure adopt the same structures as the same-group elements below them in the periodic table at lower pressures. [40]

Hexagonal layered polymeric nitrogen (HLP-N) is the third form of polymeric nitrogen found stable under pressure and was experimentally synthesized at 244 GPa and 3300 K. It adopts a tetragonal unit cell (P42bc) in which the single-bonded nitrogen atoms form two layers of interconnected N6 hexagons. It was found to be metastable down to at least 66 GPa. [41]

Simulations predicted a molecular solid made of N8 (N≡N+-N−-N=N-N−-N+≡N) which is stable at low temperatures and pressures (< 20 GPa). [42] In 2018 experiments support the prediction and show a transformation of hydrazinium azide to molecular N8. [43] The reported N8 decomposes to the ε-N2 below 25 GPa but a remainder of N8 can be at pressure as low as 3 GPa.

A similar molecule has been predicted by Grechner et al. 2016 to exist at at ambient conditions. [44]

Under pressure nitrogen can form crystalline van der Waals compounds with other molecules. It can form an orthorhombic phase with methane above 5 GPa. [45] With helium He(N2)11 is formed. [21] N2 crystallizes with water in nitrogen clathrate and in a mixture with oxygen O2 and water in air clathrate. [46]

Solid nitrogen can dissolve 2 mole % helium under pressure in its disordered phases such as the γ-phase. Under higher pressure 9 mol% helium, He can react with ε-nitrogen to form a hexagonal birefringent crystalline van der Waals compound. The unit cell contains 22 nitrogen atoms and 2 helium atoms. It has a volume of 580 Å3 for a pressure of 11 GPa decreasing to 515 Å3 at 14 GPa. [21] It resembles the ε-phase. [47] At 14.5 GPa and 295 K the unit cell has space group P63/m and a=7.936 Å c=9.360 Å. At 28 GPa a transition happens in which the orientation of N2 molecules becomes more ordered. When the pressure on He(N2)11 exceeds 135 GPa the substance changes from clear to black, and takes on an amorphous form similar to η-N2. [48]

Solid nitrogen can crystallise with some solid methane included. At 55 K the molar percentage can range up to 16.35% CH4, and at 40 K only 5%. In the complementary situation, solid methane can include some nitrogen in its crystals, up to 17.31% nitrogen. As the temperature drops, less methane can dissolve in solid nitrogen, and in α-N2 there is a major drop in methane solubility. These mixtures are prevalent in outer Solar System objects such as Pluto that have both nitrogen and methane on their surfaces. [49] At room temperature there is a clathrate of methane and nitrogen in 1:1 ratio formed at pressures over 5.6 GPa. [50]

The carbon monoxide molecule (CO) is very similar to dinitrogen in size, and it can mix in all proportions with solid nitrogen without changing crystal structure. Carbon monoxide is also found on the surfaces of Pluto and Triton at levels below 1%. Variations in the infrared linewidth of carbon monoxide absorption can reveal the concentration. [51]

Solid nitrogen can take up to a one fifth substitution by oxygen O2 and still keep the same crystal structure. [56] δ-N2 can be substituted by up to 95% O2 and retain the same structure. Solid O2 can only have a solid solution of 5% or less of N2. [56]

Solid nitrogen is used as a matrix on which to store and study reactive chemical species, such as free radicals or isolated atoms. [61] One use is to study dinitrogen complexes of metals in isolation from other molecules. [62] 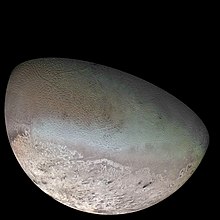 Much of the surface of Triton is covered in the hexagonal form of solid nitrogen (the β crystal phase), which can be seen as a bluish green band around the equator in this synthetic color photomosaic.

On Triton, solid nitrogen takes the form of frost crystals and a transparent sheet layer of annealed nitrogen ice, often referred to as a "glaze". [2] Geysers of nitrogen gas were observed by Voyager 2 to spew from the subpolar regions around Triton's southern polar ice cap. [63] A possible explanation of this observed phenomenon is that the sun shines through the transparent layer of nitrogen ice, heating the layers beneath. Nitrogen sublimes and eventually erupts through holes in the upper layer, carrying dust along with it and creating dark streaks.