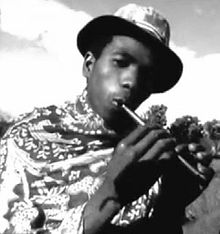 A Sodina is a woodwind instrument commonly played in Malagasy music and a member of the aerophone family of instruments. Similar in structure and sound to a flute, the sodina is usually made out of bamboo, lightwood, plastic, or reed and varies in size depending upon the region it is being played in.

Sodinas indigenous to Madagascar are often found to have anywhere from three to six equidistant openings. Sodinas can be played solo or in a group of instruments, in which case it is accompanied by many flutes and a large drum.

Ethnomusicology researches point the origins of the Sodina in Southeast Asia Islands (Indonesia, Malaysia, the Philippines) where one can still find today its bamboo form, known in Malay as suling.