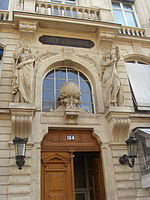 The Société de Géographie (French:  [sɔsjete də ʒeɔgʁafi]; lit. '"Geography Society"'), is the world's oldest geographical society. It was founded in 1821 as the first Geographic Society. [1] Since 1878, its headquarters have been at 184 Boulevard Saint-Germain, Paris. The entrance is marked by two gigantic caryatids representing Land and Sea. It was here, in 1879, that the construction of the Panama Canal was decided.

The Geographical Society was founded at a meeting on 15 December 1821 in the Paris Hôtel de Ville. Among its 217 founders were some of the greatest scientific names of the time, including Pierre-Simon Laplace (the Society's first president), Georges Cuvier, Charles Pierre Chapsal, Vivant Denon, Joseph Fourier, Gay-Lussac, Claude Louis Berthollet, Alexander von Humboldt, Champollion, and François-René de Chateaubriand. Most of the men who had accompanied Bonaparte in his Egyptian expedition were members: Edme-François Jomard, Conrad Malte-Brun, Jules Dumont d'Urville, Jules Paul Benjamin Delessert, Hottinguer, Henri Didot, Bottin and others such as Jean-Baptiste Benoît Eyriès.

The Society was the location of the Arab Congress of 1913, which took place from June 18 to June 23 of that year and marked the confluence of events surrounding the decline of the Ottoman Empire, the beginnings of Arab nationalism, and early Arab reaction to Zionist immigration to Palestine.

The Society's revue has appeared monthly since 1822, as Bulletin de la Société de Géographie (1822–1899) – offering in octavo format early news of all the discoveries of the nineteenth century – or quarterly, as La Géographie, with a break from 1940 until 1946. Since 1947 the Society's magazine has appeared three times a year, as Acta Geographica.

The Society's library, map collection and photograph collection are among the world's deepest and most comprehensive.