From Wikipedia
https://en.wikipedia.org/wiki/Soba_(city)
For the Japanese noodle, see Soba. 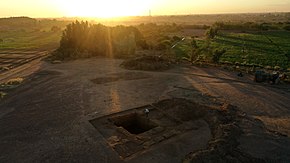 Soba during the excavations in 2019

Ibn Selim el-Aswani described the city as large and wealthy, but he probably never visited it and modern archaeological investigations show it to have been a moderate centre. Built mainly of red brick, the abandoned city was plundered for building material when Khartoum was founded in 1821. Development from the growth of suburbs now threatens the ruins.

In its heyday, the city covered approximately 275 hectares, but the excavations carried out prior to 2019 only encompassed about 1% of this area. [3] The research was conducted by, among others, expeditions from the Sudanese National Corporation for Antiquities and Museums (NCAM) and the British Institute in Eastern Africa, mostly as part of salvage excavations resulting from the construction of an asphalt road and the building activity along it. During the last 20–30 years, modern architecture has covered about half of the site. [4] In 2019, the interdisciplinary project “Soba – the heart of Alwa” was commenced. It is carried out by the Polish Centre of Mediterranean Archaeology University of Warsaw and the Institute of Archaeology and Ethnology of the Polish Academy of Sciences and is directed by Mariusz Drzewiecki ( PCMA UW). [1] It aims to study the topography of Soba and determine the extent, spatial structure, and character of each city quarter. [3] A magnetic geophysical prospection revealed unknown parts of medieval Soba. In one of the quarters, large architectural complexes stood at a distance from each other; in another, a clear street grid is visible. [1] Test trenches are also being excavated in strategic spots in the city or in places where the results of the geophysical research are not unequivocal. [5] The residence of the kingdom of Alwa’s rulers has not yet been identified. [1]