From Wikipedia
https://en.wikipedia.org/wiki/Snout
For other uses, see Snout (disambiguation).

A snout is the protruding portion of an animal's face, consisting of its nose, mouth, and jaw. In many animals, the structure is called a muzzle, [1] rostrum, or proboscis. The wet furless surface around the nostrils of the nose of some animals is called the rhinarium (colloquially this is the "cold wet snout" of some animals). The rhinarium is often associated with a stronger sense of olfaction. The snout is considered a weak point on most animals: because of its structure, an animal can be easily stunned or knocked out, or even have its snout snapped by applying sufficient force. [2] 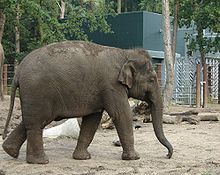 Asian Elephant (Elephas maximus indicus). The extended proboscis is called the "trunk" and is used for a wide range of purposes, including feeding, drinking, exploration, and social grooming.

Snouts are found on many mammals in a variety of shapes. Some animals, including ursines and great cats, have box-like snouts, while others, like shrews, have pointed snouts. Pig snouts are flat and cylindrical.

The muzzle begins at the stop, just below the eyes, and includes the dog's nose and mouth. In the domestic dog, most of the upper muzzle contains organs for detecting scents. The loose flaps of skin on the sides of the upper muzzle that hang to different lengths over the mouth are called 'flews'.

The muzzle is innervated by one of the twelve pairs of cranial nerves, which start in the brain and emerge through the skull to their target organs. Other destinations of these nerves are the eyeballs, teeth and tongue.

The muzzle shape of a domestic dog ranges in shape depending upon the breed, from extremely long and thin (dolichocephalic), as in the Rough Collie, to nearly nonexistent because it is so flat (extreme brachycephalic), as in the pug. Some breeds, such as many sled dogs and Spitz types, have muzzles that somewhat resemble the original wolf's in size and shape, and others in the less extreme range have shortened it somewhat (mesocephalic) as in many hounds.