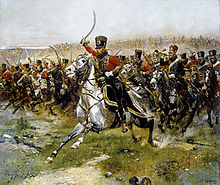 Attack of the French 4th Hussar Regiment at the Battle of Friedland, 14 June 1807

Shock tactics, shock tactic or shock attack is the name of an offensive maneuver which attempts to place the enemy under psychological pressure by a rapid and fully-committed advance with the aim of causing their combatants to retreat. The acceptance of a higher degree of risk to attain a decisive result is intrinsic to shock actions.

Shock tactics were usually performed by heavy cavalry, but were sometimes achieved by heavy infantry. The most famous shock tactic is the medieval cavalry charge. This shock attack was conducted by heavily armoured cavalry armed with lances, usually couched, galloping at full speed against an enemy formation.

After the introduction of firearms, the use of the cavalry charge as a common military tactic waned. Infantry shock action required the holding of fire until the enemy was in very close range, and was used in defence as well as attack. [1] The favorite tactic of the Duke of Wellington was for the infantry to fire a volley and then give a loud cheer and charge. [2] [3] The increasing firepower of machine guns, mortars, and artillery made this tactic increasingly hazardous. World War I saw the infantry charge at its worst, when masses of soldiers made frontal, and often disastrous, attacks on entrenched enemy positions.

Shock tactics began to be viable again with the invention of the tank. During World War II, the Germans adapted shock tactics to modern mechanized warfare, known as blitzkrieg, which gained considerable achievements during the war and was afterwards adopted by most modern armies.

The US tactic of shock and awe during the Second Gulf War was a shock tactic based on overwhelming military superiority on land and unchallenged dominance in naval and aerial warfare.