From Wikipedia
https://en.wikipedia.org/wiki/Ship_burial
Burial in which a ship or boat is used either as a container for the dead or as a part of the grave goods
Not to be confused with Burial at sea or Stone ship. 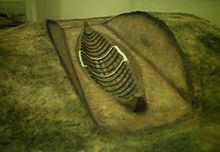 Model of the structure of the Sutton Hoo ship (c. 7th century AD) it might have appeared, with chamber area outlined

A ship burial or boat grave is a burial in which a ship or boat is used either as the tomb for the dead and the grave goods, or as a part of the grave goods itself. If the ship is very small, it is called a boat grave. This style of burial was practiced by various seafaring cultures in Asia and Europe. Notable ship burial practices include those by the Germanic peoples, particularly by Viking Age Norsemen, as well as the pre-colonial ship burials described in the Boxer Codex (c. 15th century) in the Philippines.

The extinct Bo people of China's Sichuan and Yunnan provinces are known for their hanging coffins.

The ancestors of the Bo people were instrumental in helping the Western Zhou overthrow the ruling Yin at the end of the Shang dynasty. Apart from this, the Bo people differed from other ethnic minorities in China through their burial traditions. Instead of the more common burial on the ground, the coffins of the Bo people were found hanging on cliffs. These coffins were also boat-shaped. Grave goods found in the coffins included blue and white porcelain bowls dated back from the Ming dynasty, iron knife, another smaller knife and two iron spear points. The Bo people were massacred by the Imperial Army in the later years of the Ming dynasty, and those who survived changed their names in order to escape oppression. Scenes of the typical daily life of the Bo people can also be seen through the cliff and wall paintings they have left behind. [1]

In the area of Sichuan several boat-shaped coffins have been found and dated to the Eastern Zhou Period (770–255 BC). The tombs also contains a big amount of ritual objects. [2]

A boat-shaped coffin was found in Japan during the construction of the Kita Ward of Nagoya. This coffin was found to be older than any other previously found in Japan. Another boat-shaped coffin was found in the tomb of the Ohoburo Minami Kofun-gun in Northern Kyoto, dated to the latter half of the Yayoi Period (4 B.C.-4 A.D.). The tomb contained grave goods including a cobalt blue glass bangle, an iron bangle, and several iron swords. Boat-shaped coffins called haniwa were more common during the Kofun period, and these coffins were seen in paintings along with the representation of the sun, moon, and the stars. This suggests the ritual symbols associated with boats even in Japan. [3]

There are numerous burial sites in the Philippines that include boat burials and boat-shaped burials. In fact, present-day coffins in the Philippines still resemble canoes made from hollowed out logs. There are two famous sites of burials, the jar burials in Batanes and in Catanauan. The burial markers in Batanes are shaped like a boat, with the bow and stern appearing prominently. The markers were made from stone, and were made to appear like the outline of the traditional boat tataya. Inspection of the Chuhangin and Nakamaya sites in Batanes reveals that the markers were oriented in a Northwest-Southeast direction. Principal site investigators also discovered that the bow of the markers pointed towards the sea. But apparently, when the storms cease to pound on the islands of Batanes, the bow of the boats align with the appearance of the band of the Milky Way Galaxy. This further increases the possibility that the burials were made to align with the cosmos in belief that the boats will carry the dead to the heavens and the stars.

The alignment of both of these burial sites served as evidence that people from both sites believed in the idea of the afterlife. Also, the boats were thought as a vessel for "sailing" to the heavens and the stars. This belief is a widespread idea all around the world, as we know from different burial sites all throughout Europe, the Americas and Asia.

Another burial site in Bohol was observed by the Spanish during the 16th century One account of the burial states:

"In some places, they kill slaves and bury them with their masters in order to serve them in the afterlife, this practice is carried out to the extent that many load a ship with more than sixty slaves, fill it up with food and drink, place the dead on board, and the entire vessel including live slaves buried in the earth." [5] [6]

Perhaps the most famous boat-shaped burial found in the Philippines is the Manunggul Jar. The jars were excavated from a Neolithic burial site in Manunggul cave of Tabon Caves at Lipuun Point at Palawan. The jars were found to be from 890–710 B.C. The main feature of the Manunggul jar is the two human figures seated on a boat at the top handle of its cover. The figures represent the journey of the soul to the afterlife, with another figure serving as his oarsman. [7]

The burial jar with a cover featuring a ship-of-the-dead […] is perhaps unrivaled in Southeast Asia; the work of an artist and master potter. This vessel provides a clear example of a cultural link between the archaeological past and the ethnographic present. The boatman […] is steering rather than paddling the "ship". The mast of the boat was not recovered. Both figures appear to be wearing bands tied over the crowns of their heads and under their jaws; a pattern still found in burial practices among the indigenous peoples in the Southern Philippines. The manner in which the hands of the front figure are folded across the chest is also a widespread practice in the islands when arranging the corpse.

The carved prow and the eye motif of the spirit boat is still found on the traditional watercraft of the Sulu Archipelago, Borneo, and Malaysia. Similarities in the execution of the ears, eyes, nose, and mouth of the figures may be seen today in the wood carving of Taiwan, the Philippines, and elsewhere in Southeast Asia. [8]

The Dong Son culture in Vietnam is known by archaeologists due to a great concentration of boat-shaped coffins. 171 boat-shaped coffins were recovered from 44 sites in Vietnam, and most of these were found from Dong Son sites. Some of these burials included carefully arranged grave goods inside the coffin along with the corpse of the dead. Also, the coffins were found strategically close to water, either rivers or small streams of sea. [9]

A unique eyewitness account of a 10th-century ship burial among the Volga Vikings is given by Arab traveller Ibn Fadlan. [10] The largest Viking ship grave, 65 feet (20 m) long, was discovered in Norway by archeologists in 2018, and it is estimated to have been covered over 1000 years ago to be used as a boat grave for an eminent Viking king or queen. [11]