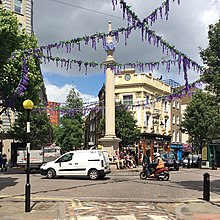 Seven Dials junction and sundial, as seen from Monmouth Street

Seven Dials is a road junction in the St Giles district of the London Borough of Camden, close to Covent Garden in the West End of London. Seven streets converge at the roughly circular junction, at the centre of which is a column bearing six sundials – the column had been commissioned before a late-stage alteration of the plans from an original six roads to seven.

The term also refers informally to the area immediately surrounding. 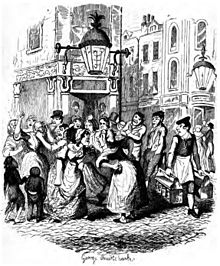 Seven Dials around 1836: illustration by George Cruikshank in Dickens' Sketches by Boz.

A landed estate known as Cock and Pye Fields belonged to the Worshipful Company of Mercers, which in the 17th century, to maximise its income in the burgeoning West End, allowed building licences on what until then was open farmland near the developing metropolitan area. The original layout of the Seven Dials area was designed by Thomas Neale during the early 1690s. His plan had six roads converging, although this number was later increased to seven. The sundial column was built with only six faces, with the column itself acting as the gnomon of the seventh dial. This layout was chosen to produce triangular plots, in order to minimise the frontage of houses to be built on the site, as rentals were charged per foot of frontage rather than by the square footage of properties. [1]

After the successful development of the Covent Garden Piazza area nearby, Neale hoped that Seven Dials would be popular with wealthy residents. This was not to be, and the status of the area gradually went down. At one stage, each of the seven apex buildings facing the column housed a pub. By the 19th century, Seven Dials was among the most notorious slums in London, as part of the slum of St Giles. The area was described by Charles Dickens during 1835: [2]

... streets and courts [that] dart in all directions, until they are lost in the unwholesome vapour which hangs over the house-tops and renders the dirty perspective uncertain and confined.

In his collection Sketches by Boz, Dickens remarks, [1]

The stranger who finds himself in the Dials for the first time...at the entrance of Seven obscure passages, uncertain which to take, will see enough around him to keep his curiosity awake for no inconsiderable time...

The poet John Keats described the area as the last resort for the poor and the ill. [3]

... where misery clings to misery for a little warmth, and want and disease lie down side-by-side, and groan together.

The relatively low status of the location is also stated by W. S. Gilbert in the operetta Iolanthe

Hearts just as pure and fair
May beat in Belgrave Square
As in the lowly air of Seven Dials.

It remained a byword for urban poverty during the early 20th century, when Agatha Christie set The Seven Dials Mystery (1929) there.

The original sundial column was removed during 1773. It was long believed that it had been pulled down by an angry mob, but recent research suggests it was deliberately removed by the Paving Commissioners in an attempt to rid the area of "undesirables". The remains were acquired by architect James Paine, who kept them at his house in Addlestone, Surrey, from where they were bought during 1820 by public subscription and re-erected in nearby Weybridge as a memorial to Princess Frederica Charlotte of Prussia, Duchess of York and Albany.

During the 1840s Seven Dials was a major gathering area for the Chartists in their campaign for electoral reform. However, the illegal activities of some (plans for armed uprisings) were thwarted by the recently-established police force. [4]

By 1851 sewers were laid in the area, but poverty intensified in St Giles and in the Seven Dials, although the population began to decrease as workshops and breweries began occupying some of the houses. [5] The model developed by Margaret Frere was established here to support poor children in education; it was adopted throughout London for school social work. [6]

Today, only two houses remain from the original Thomas Neale development of the 1690s; 61 Monmouth Street and 64 Neal Street. 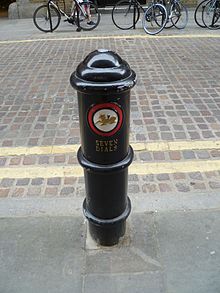 According to Camden Council, the currently defined area "can be found to the north west of Covent Garden Market, and just to the south of Shaftesbury Avenue. The Dials comprise Earlham Street, Monmouth Street, Mercer Street and Shorts Gardens. The area now known as Seven Dials also includes Neal Street and Neals Yard." [8] Monmouth Street is the only street in Seven Dials to have an official number; the B404. The others are unclassified.

During 1974, Seven Dials was named a Conservation Area with Outstanding Status [9] and during 1977 it was declared a Housing Action Area. By 1984, the Housing Action Area Committee ensured that all of the vacant homes were in some use and was encouraging business to locate in the area. [10] [11] An increasing number of buildings have been restored over the years. Since 1974, over 25 percent of the area's buildings have been listed. [12] Presently Seven Dials is a prosperous, largely commercial neighbourhood in the WC2 postcode area between the West End theatre district of Shaftesbury Avenue and the fashionable shopping district around nearby Neal's Yard. It is dominated by generally slow-moving traffic in the narrow streets, which are usually crowded with people.

The replacement sundial pillar, commissioned by The Seven Dials Trust, (formerly The Seven Dials Monument Charity), [13] was constructed during 1988–89 to the original design. It was unveiled by Beatrix of the Netherlands during June 1989, on a visit to commemorate the tercentenary of the reign of William III and Mary II, during which the area was developed. The monument is owned by, and continues to be maintained by, The Seven Dials Trust whose mandate also includes improving the area, working with landowners as well as national and local agencies. [9] [12]

By late 2017, investment company Shaftesbury plc owned an increasing number of the buildings, a "huge chunk" of the area, according to one news report. [14] At that time, significant changes were occurring in the business properties including the conversion of a mall owned by Shaftesbury plc, Thomas Neal's Warehouse, into a single store that might become the main store for a major retailer and the conversion of a warehouse into office space. [15]

On one of the seven apexes remains a pub, The Crown. On another apex is the Cambridge Theatre, and on a third the Radisson Edwardian Mercer Street Hotel. On another is the Comyn Ching Triangle, a block of old buildings renovated during the 1980s. Despite some redevelopment, many original buildings remain. There are two historic plaques in the area, one at 13 Monmouth Street, where Brian Epstein managed his company [1] and another in Neal's Yard, at the "Animation, Editing and Recording Studios of Monty Python", actually the studios and offices of Michael Palin and Terry Gilliam from 1976 to 1987. [16]

A November 2017 report describes Seven Dials as follows:[ This quote needs a citation]

In its own right, this septet of streets is home to nearly 100 fashion, beauty and lifestyle stores, plus 90 or so independent cafés, bars and restaurants. You can find food, fashion and music festivals throughout the year, join in huge parades or private shopping events, and there is culture galore on tap, including many of the West End's best known theatres on the doorstep. ... Seven Dials combines boutique, independent retail with high-end, household name British brands, street food with Michelin-starred restaurants, and cutting edge coolness with a definite flavour of its past in its cobbled streets and courtyards. 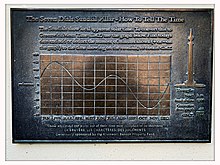 The Seven Dials Sundial Pillar - How To Tell The Time

Neale commissioned the architect and stonemason Edward Pierce to design and construct a sundial pillar during 1693–94. The original drawing in brown ink with a grey wash is in the British Museum collection. [17]

On top of an 8 feet (2.4 m) high plinth, there is a 20 feet (6.1 m) high Doric column. The sculpture that contains the six sundials and the pinnacle is 10 feet (3.0 m). This block is arranged with a directly southern and direct northern vertical dial, and four vertically declining dials. The monument was erected during 1694, but removed during 1773. [18] The replica was commissioned during 1984 and erected during 1989 The dials were designed, carved and gilded by Caroline Webb, while the astronomer Gordon Taylor verified the maths. Each of the faces is accurate to within ten seconds. [18] The dials give local apparent solar time, so a correction must be made using the conversion graph displayed on the plinth to work out clock time. [18] Seven dials is 0° 07' geographical degrees to the west of Greenwich – that is 3.048 seconds behind Greenwich Mean Time.

Seven Dials is predominantly owned by Shaftesbury PLC, which also have a joint venture with the Worshipful Company of Mercers at the adjoining St Martin's Courtyard. [36]