From Wikipedia
https://en.wikipedia.org/wiki/Seminary
Institution for educating students in theology 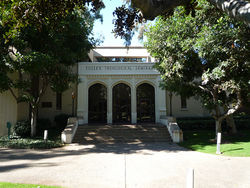 In the United States, the term is currently used for graduate-level theological institutions, but historically it was used for high schools.

The establishment of modern seminaries resulted from Roman Catholic reforms of the Counter-Reformation after the Council of Trent. [3] The Tridentine seminaries placed great emphasis on personal discipline as well as the teaching of philosophy as a preparation for theology. [4] In the United States, Protestant institutions widely adopted the term 'seminary' for independent graduate schools (separate from a university) to train its ministers. The oldest seminary in the United States was Andover Theological Seminary founded in 1807 and affiliated with the Congregationalist Church.

All seminaries are run either by religious orders or by dioceses or other similar structures. Often a seminary will train both that particular order's or diocese's priests and the priests of other orders or dioceses that select that particular seminary for its priests. For instance, Saint John's Seminary in Boston, Massachusetts trains priests for many of the other dioceses in New England which are suffragan dioceses of the Roman Catholic Archdiocese of Boston. Either way, a man who seeks to enter a seminary to become a priest must be sponsored by either a diocese or by a religious order.

Often a diocese might be attached to or affiliated with a larger Catholic college or university so that the larger college and its faculty provides more general education in history or theology while the seminary focuses on topics specific to the needs of future priests, such as training in canon law, the sacraments, and preaching, or specific to the particular order or diocese. For instance the Theological College in Washington, D.C. is part of The Catholic University of America.

Further, in Rome there are several seminaries which educate seminarians or already ordained priests and bishops and which are maintained by orders or dioceses from outside of Italy. For instance, the Pontifical North American College, which trains priests from the United States and elsewhere, is supported by the United States Conference of Catholic Bishops.

The International Council for Evangelical Theological Education was founded in 1980 by the Theological Commission of the World Evangelical Alliance. [5] In 2015, it would have 1,000 member schools in 113 countries. [6]

Other uses of the term

In some countries, the term seminary is also used for secular schools of higher education that train teachers; in the nineteenth century, many female seminaries were established in the United States. [7]

The Church of Jesus Christ of Latter-day Saints ( Also known as the LDS Church or the Mormons) hosts seminary classes for high school students ages 14 to 18, as part of the Church Educational System. Unlike use in other religious contexts, the word "seminary", in an LDS Church context, does not refer to a higher education program designed to train students that they may obtain a church-based career. [8] LDS seminary students do not get high school credit for their seminary studies.