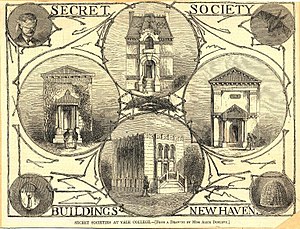 A secret society is a club or an organization whose activities, events, inner functioning, or membership are concealed. The society may or may not attempt to conceal its existence. The term usually excludes covert groups, such as intelligence agencies or guerrilla warfare insurgencies, that hide their activities and memberships but maintain a public presence. [2]

The exact qualifications for labeling a group a secret society are disputed, but definitions generally rely on the degree to which the organization insists on secrecy, and might involve the retention and transmission of secret knowledge, the denial of membership or knowledge of the group, the creation of personal bonds between members of the organization, and the use of secret rites or rituals which solidify members of the group.

Anthropologically and historically, secret societies have been deeply interlinked with the concept of the Männerbund, the all-male "warrior-band" or "warrior-society" of pre-modern cultures (see H. Schurtz, Alterklassen und Männerbünde, Berlin, 1902; A. Van Gennep, The Rites of Passage, Chicago, 1960).

A purported "family tree of secret societies" has been proposed, although it may not be comprehensive. [3]

Alan Axelrod, author of the International Encyclopedia of Secret Societies and Fraternal Orders, [4] defines a secret society as an organization that:

Historian Richard B. Spence [5] of the University of Idaho offered a similar three-pronged definition:

Spence also proposes a sub-category of "Elite Secret Societies" (composed of high-income or socially influential people), and notes that secret societies have a frequent if not universal tendency towards factionalism, infighting and claiming origins older than can be reliably documented. Spence's definition includes groups traditionally thought of as secret societies ( Freemasons and Rosicrucians) and other groups not so traditionally classified such as certain organized crime cabals ( the Mafia), religious groups ( Order of Assassins and Thelema) and political movements ( Bolsheviks and Black Dragon Society).

David V. Barrett, author of Secret Societies: From the Ancient and Arcane to the Modern and Clandestine, has used alternative terms to define what qualifies a secret society. He defined it as any group that possesses the following characteristics:

Barrett goes on to say that "a further characteristic common to most of them is the practice of rituals which non-members are not permitted to observe, or even to know the existence of." Barrett's definition would rule out many organizations called secret societies; graded teaching is usually not part of the American college fraternities, the Carbonari, or the 19th-century Know Nothings.[ citation needed]

Historian Jasper Ridley argues that Freemasonry is, "the world's most powerful secret Society." [6]

The organisation " Opus Dei" ( Latin for "Work of God") is portrait as a "secret society" [7] [8] [9] of the Catholic Church. Critics such as the Jesuit Wladimir Ledóchowski sometimes refer to Opus Dei as a Catholic (or Christian or "white") form of Freemasonry. [10] [11] [12] [13] [14] Other critics label Opus Dei as "Holy Mafia" [15] or "Santa Mafia" [16] as the organisation is connected with various questionable practises including intense " brainwashing" of its members to exploit labor force [17] as well as the direct involvement of members in severe crimes such as baby-trafficking [18] in Spain under the dictator Francisco Franco.

Because some secret societies have political aims, they are illegal in several countries. Italy ( Constitution of Italy, Section 2, Articles 13–28) and Poland, [19] for example, ban secret political parties and political organizations in their constitutions.

In France, Vandermonde is the secret society of the Conservatoire National des Arts et Métiers. [28]

Secret societies are disallowed in a few colleges. The Virginia Military Institute has rules that no cadet may join a secret society, [29] and secret societies have been banned at Oberlin College from 1847 [30] to the present, [31] and at Princeton University since the beginning of the 20th century.

Confraternities in Nigeria are secret-society like student groups within higher education. The exact death toll of confraternity activities is unclear. One estimate in 2002 was that 250 people had been killed in campus cult-related murders in the previous decade, [32] while the Exam Ethics Project lobby group estimated that 115 students and teachers had been killed between 1993 and 2003. [33]

The Mandatory Monday Association is thought to operate out of a variety of Australian universities including the Australian Defence Force Academy. The Association has numerous chapters that meet only on Mondays to discuss business and carry out rituals. [34]

The only secret society abolished and then legalized is that of The Philomaths, [35] it is nowadays a legitimate academic association founded on a strict selection of its members.

While their existence had been speculated for years, internet-based secret societies first became known to the public in 2012 when the secret society known as Cicada 3301 began recruiting from the public via internet-based puzzles. [36] [37] The goals of the society remain unknown, but it is believed that they are involved in cryptography. [38] [39] 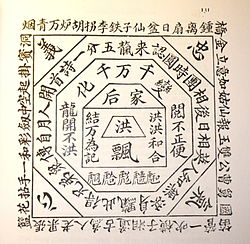 Many Christian Churches forbid their members from joining secret societies. For example, ¶41 of the General Rules contained in Discipline of the Allegheny Wesleyan Methodist Connection teaches: [41]

Further, by abstaining from membership in secret societies. We will on no account tolerate our ministers and members joining or holding fellowship with secret societies, as, in the judgment of The Allegheny Wesleyan Methodist Connection (Original Allegheny Conference), it is inconsistent with our duties to God to hold such relations.


"Jesus answered him, I spake openly to the world; I ever taught in the synagogue, and in the temple, whither the Jews always resort; and in secret have I said nothing" (John 18:20). "Wherefore if they shall say unto you, Behold, he is in the desert; go not forth: behold, he is in the secret chambers; believe it not" (Matt. 24:26).
"But above all things, my brethren, swear not, neither by heaven, neither by the earth, neither by any other oath: but let your yea be yea; and your nay, nay; lest ye fall into condemnation" (Jas. 5:12).