From Wikipedia
https://en.wikipedia.org/wiki/Sclerophyll
Type of vegetation that has hard leaves, short internodes and leaf orientation parallel or oblique to direct sunlight

The hard leaves of a Banksia integrifolia (notice the short internodes)

Sclerophyll is a type of vegetation that has hard leaves, short internodes (the distance between leaves along the stem) and leaf orientation parallel or oblique to direct sunlight that are adapted to long periods of dryness and heat that some types of vegetation present. The word comes from the Greek sklēros (hard) and phyllon (leaf). The term was coined by A.F.W. Schimper in 1898 (translated in 1903), originally as a synonym of xeromorph, but later was changed. [1]

Sclerophyllous plants occur in many parts of the world, [2] but are most typical of areas with low rainfall or seasonal droughts such as Australia, Africa, or western North and South America. They are prominent throughout Australia, parts of Argentina, the Cerrado biogeographic region of Bolivia, Paraguay and Brazil, and in the Mediterranean biomes that cover the Mediterranean Basin, California, Chile, and the Cape Province of South Africa.

In the Mediterranean basin, olm oak, cork oak and olive are typical hardwood trees. In addition, there are several species of pine under the trees in the vegetation zone. The shrub layer contains numerous herbs such as rosemary, thyme and lavender. In relation to the potential natural vegetation, around 2% of the earth's land surface are sclerophyll areas and a total of 10% of all plant species on earth live there.

Sclerophyll woody plants are characterized by their relatively small, stiff, leathery and long-lasting leaves. The sclerophyll vegetation is the result of an adaptation of the flora to the summer dry period of the Mediterranean climate.

Plant species with this type of adaptation tend to be evergreen with great longevity, slow growth and with no loss of leaves during the unfavorable season. To note, "sclerophyll" and "evergreen" are not synonymous. As a result, the thickets that make up these ecosystems are of the persistent evergreen type, in addition to the predominance of plants, even herbaceous ones, with "hard" leaves, which are covered by a thick leathery layer called the cuticle, that prevents water loss during the dry season. The aerial and underground structures of these plants are modified to make up for water shortages that may affect their survival.

The name sclerophyll derives from the highly developed sclerenchyma from the plant, which is responsible for the hardness or stiffness of the leaves. This structure of the leaves inhibits transpiration and thus prevents major water losses during the dry season. Most of the plant species in the sclerophyll zone are not only insensitive to summer drought, they have also used various strategies to adapt to frequent wildfires, heavy rainfall and nutrient deficiencies. [3] 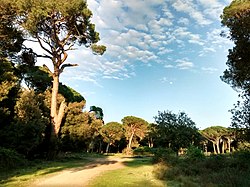 A sclerophyll bushland in Sydney (which falls in the humid subtropical zone).

The sclerophyll regions are located in the outer subtropics bordering the temperate zone (also known as the warm-temperate zone). Accordingly, the annual average temperatures are relatively high at 12–24°C; An average of over 18°C is reached for at least four months, eight to twelve months it is over 10°C and no month is below 5°C on average. Frost and snow occur only occasionally and the growing season lasts longer than 150 days and is in the winter half-year. [9] The lower limit of the moderate annual precipitation is 300mm ( semi-arid climate) and the upper limit 900-1000 mm.

Generally, the summers are dry and hot with a dry season of a maximum of seven months, but at least two to three months. The winters are rainy and cool. However, not all regions with sclerophyll vegetation feature the classic Mediterranean climate; parts of eastern Italy, eastern Australia and eastern South Africa, which feature sclerophyll woodlands, tend to have uniform rainfall or even a more summer-dominant rainfall, whereby falling under the humid subtropical climate zone (Cfa/Cwa). Furthermore, other areas with sclerophyll flora would grade to the oceanic climate (Cfb); particularly the eastern parts of the Eastern Cape province in South Africa, and Tasmania, Victoria and southern New South Wales in Australia. [10]

The zone of the sclerophyll vegetation lies in the border area between the subtropics and the temperate zone, approximately between the 30th and 40th degree of latitude (in the northern hemisphere also up to the 45th degree of latitude). Their presence is limited to the coastal western sides of the continents, but nonetheless can typical in any regions of a continent with scarce annual precipitation or frequent seasonal droughts and poor soils that are heavily leached. [11]

The sclerophyll zone often merges into temperate deciduous forests towards the poles, on the coasts also into temperate rainforests and towards the equator in hot semi-deserts or deserts. The Mediterranean areas, which have a very high biodiversity, are under great pressure from the population. This is especially true for the Mediterranean region since ancient times. Through overexploitation (logging, grazing, agricultural use) and frequent fires caused by people, the original forest vegetation is converted. In extreme cases, the hard-leaf vegetation disappears completely and is replaced by open rock heaths. 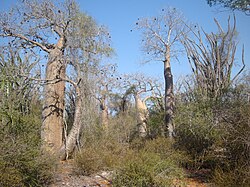 Some sclerophyll areas are closer to the equator than the Mediterranean zone - for example, the interior of Madagascar, the dry half of New Caledonia, the lower edge areas of the Madrean pine-oak woodlands of the Mexican highlands between 800 and 1800/2000 m or around 2000 m high plateaus of the Asir Mountains on the western edge of the Arabian Peninsula. [12]

While the winter rain areas of America, South Africa and Australia, with an unusually large variety of food crops, were ideal gathering areas for hunter gatherers until European colonization, agriculture and cattle breeding spread in the Mediterranean area since the Neolithic, which permanently changed the face of the landscape. In the sclerophyll regions near the coast, permanent crops such as olive and wine cultivation established themselves; However, the landscape forms that characterize the degenerate shrubbery and shrub heaths Macchie and Garigue are predominantly a result of grazing (especially with goats).

In the course of the last millennia, the original vegetation in almost all areas of this vegetation zone has been greatly changed by the influence of humans. Where the plants have not been replaced by vineyards and olive groves, the maquis was the predominant form of vegetation on the Mediterranean. The maquis has been degraded in many places to the low shrub heather, the garigue. Many plant species that are rich in aromatic oils belong to both vegetation societies. The diversity of the original sclerophyll vegetation in the world is high to extremely high (3000-5000 species per ha). [13]

Most areas of the Australian continent able to support woody plants are occupied by sclerophyll communities as forests, savannas, or heathlands. Common plants include the Proteaceae ( grevilleas, banksias and hakeas), tea-trees, acacias, boronias, and eucalypts.

The most common sclerophyll communities in Australia are savannas dominated by grasses with an overstorey of eucalypts and acacias. Acacia (particularly mulga) shrublands also cover extensive areas. All the dominant overstorey acacia species and a majority of the understorey acacias have a scleromorphic adaptation in which the leaves have been reduced to phyllodes consisting entirely of the petiole. [14]

Many plants of the sclerophyllous woodlands and shrublands also produce leaves unpalatable to herbivores by the inclusion of toxic and indigestible compounds which assure survival of these long-lived leaves. This trait is particularly noticeable in the eucalypt and Melaleuca species which possess oil glands within their leaves that produce a pungent volatile oil that makes them unpalatable to most browsers. [15] These traits make the majority of woody plants in these woodlands largely unpalatable to domestic livestock. [16] It is therefore important from a grazing perspective that these woodlands support a more or less continuous layer of herbaceous ground cover dominated by grasses.

Sclerophyllous plants are all part of a specific environment and are anything but newcomers. By the time of European settlement, sclerophyll forest accounted for the vast bulk of the forested areas.

Most of the wooded parts of present-day Australia have become sclerophyll dominated as a result of the extreme age of the continent combined with Aboriginal fire use. Deep weathering of the crust over many millions of years leached chemicals out of the rock, leaving Australian soils deficient in nutrients, particularly phosphorus. Such nutrient deficient soils support non-sclerophyllous plant communities elsewhere in the world and did so over most of Australia prior to European arrival. However such deficient soils cannot support the nutrient losses associated with frequent fires and are rapidly replaced with sclerophyllous species under traditional Aboriginal burning regimens. With the cessation of traditional burning non-sclerophyllous species have re-colonized sclerophyll habitat in many parts of Australia.[ citation needed]

The presence of toxic compounds combined with a high carbon : nitrogen ratio make the leaves and branches of scleromorphic species long-lived in the litter, and can lead to a large build-up of litter in woodlands. [18] [19] The toxic compounds of many species, notably Eucalyptus species, are volatile and flammable and the presence of large amounts of flammable litter, coupled with an herbaceous understorey, encourages fire. [20]

All the Australian sclerophyllous communities are liable to be burnt with varying frequencies and many of the woody plants of these woodlands have developed adaptations to survive and minimise the effects of fire. [21]

Sclerophyllous plants generally resist dry conditions well, making them successful in areas of seasonally variable rainfall. In Australia, however, they evolved in response to the low level of phosphorus in the soil — indeed, many native Australian plants cannot tolerate higher levels of phosphorus and will die if fertilised incorrectly. The leaves are hard due to lignin, which prevents wilting and allows plants to grow, even when there isn't enough phosphorus for substantial new cell growth. [22]

These are the biomes or ecoregions in the world that feature an abundance of, or are known for having, sclerophyll vegetation: