From Wikipedia
https://en.wikipedia.org/wiki/Scala_Theatre
Former theatre in London, England
This article is about the former Scala Theatre in London. For other uses, see Scala (disambiguation) § Places and buildings. 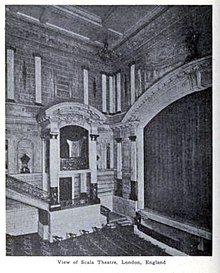 The theatre began on this site as The New Rooms where concerts were performed, in Charlotte Street, in 1772, under the management of Francis Pasquali. Popularity, and royal patronage led to the building's enlargement by James Wyatt, and its renaming as the King's Concert Rooms (1780–1786). It then became Rooms for Concerts of Ancient Music and Hyde's Rooms (1786–1802, managed by The Directors of Concerts and Ancient Music).

In 1802, a private theatre club managed by Captain Caulfield, the "Pic-Nics", occupied the building and named it the Cognoscenti Theatre (1802–1808). It became the New Theatre (1808–1815) and was extended and fitted out as a public theatre, with a portico entrance on Tottenham Street. It opened on 23 April 1810 with Love in a Village. [1]

In 1865, the theatre was renovated and named the Prince of Wales's Royal Theatre and this continued until it went dark in 1882. [5] [6] It was demolished in 1903. [4] In 1865, in partnership with Henry Byron, Marie Wilton assumed the management of the theatre, having secured as a leading actor Squire Bancroft. He starred in J. P. Wooler's A Winning Hazard, among other works. Wilton provided the capital, and Byron wrote a number of plays. His first was a burlesque of La sonnambula. However, Wilton wanted to present more sophisticated pieces. She agreed to produce three more burlesques by Byron, while he agreed to write his first prose comedies, War to the Knife (a success in 1865) and A Hundred Thousand Pounds (1866). By 1867, Byron left the partnership. [7] [8]

The house soon became noted for the successful domestic drama-comedies by Thomas William Robertson, including his series of groundbreaking realist plays, Society (1865), Ours (1866), Caste (1867), Play (1868), School (1869), and M.P. (1870). [9] In 1867, Wilton married Squire Bancroft and took his surname as Mrs. Effie Bancroft and regularly took the principal female parts in these pieces opposite her husband. Other plays were W. S. Gilbert's Allow Me To Explain (1867; this ran as a companion piece to Robertson's Caste) [10] and Sweethearts (1874), as well as Tame Cats (1868), Lytton's Money (1872), The School for Scandal (1874), a revival of Boucicault's London Assurance (1877), and Diplomacy ( Clement Scott's 1878 adaptation of Sardou's Dora). A number of prominent actors played at the theatre during this period, among them John Hare, Charles Coghlan, the Kendals, and Ellen Terry.

A big success in 1881 was F. C. Burnand's The Colonel, which went on to run for 550 performances, transferring to the Imperial Theatre. In 1882, the theatre went dark, and from 1886 the theatre buildings were used as a Salvation Army Hostel, until it was demolished in 1903. [4] Another theatre near Leicester Square, London, began to use the name Prince of Wales Theatre in 1886. [11]

In 1903, Dr. Edmund Distin Maddick bought the property, and adjoining properties, and enlarged the site. The main entrance was now in Charlotte Street, and the old portico in Tottenham Street became the stage door. The new theatre, designed by Frank Verity, opened in 1905, as The Scala Theatre, seating 1,139 and boasting a large stage. The new venture was not particularly successful, and became a cinema from 1911–1918, run by Charles Urban. [4] In 1918, F. J. Nettlefold took over and ran the premises as a theatre again.

It became known as the New Scala in 1923, with D. A. Abrahams as licensee for staging plays and showing films; he became owner in 1925. Amateur productions and pantomime were performed, and for a while the theatre became home to the Gang Show. During World War II, it again housed professional theatre, reverting to the Scala Theatre. After the war, under the management of Prince Littler, amateur productions returned, with Peter Pan being the annual pantomime. This continued until 1969 when, after a fire, it was demolished for the building of offices, known as Scala House. In 1964, the theatre was used by The Beatles for the concert sequences in the film A Hard Day's Night.