From Wikipedia
https://en.wikipedia.org/wiki/Sara_Ramirez
Mexican-American actor, singer, and songwriter
This article is about the Mexican-American singer and actor. For other uses, see Sara Ramírez (disambiguation).
This is a Spanish name. The family name Ramirez is sometimes transliterated as Ramírez in Spanish-language text.

Ramírez began acting in Broadway productions, making their [a] debut in Paul Simon's The Capeman, and later ventured into film and television roles. Ramirez' breakthrough came with their portrayal of the original Lady of the Lake in the 2005 Broadway musical Spamalot, winning the Tony Award for Best Featured Actress in a Musical. Ramírez was offered to pick their own primetime television show in an array of ABC lineups, choosing Grey's Anatomy. They portrayed Dr. Callie Torres, the longest-running LGBT character in US television history, appearing in 11 seasons and 239 episodes. Ramirez's volunteered addition of the character's bisexuality also marking one of the earliest series regular queer roles on primetime television. Following their departure from the series, Ramirez came out as bisexual and later non-binary. They later portrayed the bisexual, non-binary role of Kat Sandoval in Madam Secretary.

Ramirez made their debut as a voice artist with the 1999 video game entitled UmJammer Lammy, and has voiced Queen Miranda in the animated series Sofia the First (2012–2018). Ramírez released their first single " Silent Night" in 2009. Their self-titled EP debuted at no. 37 on the Billboard 200 in 2011.

Ramirez's extensive campaigns for LGBT rights won the Ally for Equality Award from the Human Rights Campaign Foundation in 2015. Ramírez has also been the recipient of a Tony Award, a Screen Actors Guild Award, and a Satellite Award, among other accolades.

Ramirez was born on August 31, 1975, [1] in Mazatlán, Sinaloa in northwestern Mexico. Ramírez’s father and mother are Mexican. Ramírez’s parents divorced when they were eight years old, and Ramirez went to live with their mother, [2] eventually settling in Tierrasanta, San Diego, California. Ramirez's interest in music encouraged their mother to send them to San Diego School of Creative and Performing Arts, where their singing talent was discovered during an audition. [2] Ramirez started acting in stage productions in high school. [3]

After having played such roles as the Witch in Into the Woods, Dolly in Hello, Dolly! and Miss Hannigan in Annie, [3] Ramirez was recommended for the Juilliard School, New York City, from which she graduated with a Bachelor in Fine Arts (dramatics). [2] At Juilliard, Ramirez further worked on their acting skills and trained as a vocalist. [4] Ramirez speaks both Spanish and English fluently. [5]

While still at Juilliard, Ramirez was discovered by a casting director and was offered the role of Wahzinak in Paul Simon's 1998 Broadway musical The Capeman. [6] Based on the life of the Puerto Rican gangster Salvador Agron, the production garnered negative reviews, but Ramirez was singled out for their "outstanding" performance. [7] They made their screen debut in the same year, with a minor yet "memorable" role in the romantic comedy You've Got Mail. [8] Starring Tom Hanks and Meg Ryan, the film had Ramirez play Rose, a Zabars cashier who was "very serious about her line's cash-only policy." [9] Ramirez voiced the titular character of Lammy in the video game UmJammer Lammy, a spin-off of PaRappa the Rapper, on Sony's PlayStation console. They later reprised their role in the latter's sequel for PlayStation 2, but had a smaller role. [10]

In 1999, Ramirez appeared in Mark Lamos' The Gershwins' Fascinating Rhythm (1999). They garnered praise for their performance and received an Outer Critics Circle Award nomination for their role. Charles Isherwood of Variety praised their "beautiful, smoky voice" but was critical of their "torchy" performance of "The Man I Love," which ignored "the wry irony that infuses Ira's lyrics". [11] Ramirez then appeared in the 2001 Broadway production of Edward Kleban's A Class Act. They replaced Julia Murney (from the off-Broadway) to play the role of Felecia, the protagonist Ed's boss. [12] The same year, they starred in other productions including Fascinating Rhythm and Dreamgirls, and then performed in the 2002 production of The Vagina Monologues with Tovah Feldshuh and Suzanne Bertish. [13] During this time, Ramirez also appeared in guest roles in several television series, including NYPD Blue, Law & Order: SVU, Third Watch, and Spin City among others. [14]

Ramirez's breakout role came when they were cast as the Lady of the Lake in Eric Idle and John Du Prez's musical Spamalot. [15] Based on the 1975 film Monty Python and the Holy Grail, the musical opened on Broadway in 2005 to widespread acclaim. [16] Ramirez was singled out for their performance, winning several awards including the 2005 Tony Award for Best Featured Actress in a Musical and the Drama League Award for Distinguished Performance. [17] Ben Brantley of The New York Times described them as "a toothsome devourer of scenery", [18] and another reviewer for The Playgoer emphasizing their stage presence remarked that their "intensity is totally serious and totally ludicrous and totally on key". [19] An Entertainment Weekly review gave them the highest praise by calling them a show-stealer. [20]

After their success on Broadway, Ramírez joined the cast of the ABC medical drama Grey's Anatomy in a recurring role as Dr. Calliope 'Callie' Torres, a love interest for Dr. George O'Malley, in the show's second season. On a special Grey's Anatomy-themed episode of The Oprah Winfrey Show, Ramírez revealed that top executives from ABC, who were greatly impressed by their performance in Spamalot, offered them a role in any ABC show they wanted. Ramírez picked Grey's, as they were already a fan of the show. [21] Ramírez further explained that at their initial audition, the producers liked them and intended to add them to the show but did not know who to cast them as. [22] Ramírez also said they were in awe of how the executives said, "Pick a show, any show," explaining that it is rare. [23] The series creator and executive producer, Shonda Rhimes explained, "I was looking for a girlfriend for George, but it was in the infancy stages, so I had no idea what I was looking for." Rhimes built the character around Ramírez after Rhimes met them. [24] Ramírez, who was initially given a recurring status at the time of the character's inception, received a star billing in the show's third season, alongside fellow cast member Eric Dane, who portrayed Dr. Mark Sloan. [25]

Ramirez provided a cappella vocals in the song " Silent Night" for the soundtrack of the show's sixth-season episode "Holidaze," airing on November 19, 2009. Ramirez served as the main vocalist for the musical episode of Grey's Anatomy, " Song Beneath the Song", which aired on March 31, 2011. Marcus James Dixon of Gold Derby called them the "show-stopper" and wrote that they "stole the show in a gut-wrenching performance worthy of an Emmy award." [26]

As the series progressed, the character's popularity soared and Ramírez garnered widespread recognition and critical acclaim for their portrayal of a complex character on television. [27] [28] Maggie Fremont, a TV critic for Vulture, reviewed Ramírez and Jessica Capshaw's performances during an eleventh season episode, calling them "goddesses walking amongst mere mortals". [29] Ramírez was nominated for Outstanding Actress in a Drama Television Series at the Alma Awards in 2007 and 2008. [30] Also in 2007, at the 13th Screen Actors Guild Awards, the cast of Grey's Anatomy received the Award for Outstanding Performance by an Ensemble in a Drama Series. [31] They and the cast were nominated for the same award in 2008. [32] In 2011, at the 42nd NAACP Image Awards, Ramírez was nominated for Outstanding Supporting Actress in a Drama Series. [33]

In May 2016, Ramírez left the show at the conclusion of the twelfth season, after having played the character for a decade. [34] They released a statement saying, "I'm deeply grateful to have spent the last 10 years with my family at Grey's Anatomy and ABC, but for now I'm taking some welcome time off." [34] Rhimes wrote of Ramírez's work on the show, "Dr. Callie Torres came into our lives dancing it out in her underwear almost a decade ago, and I could not be happier or more proud of her journey. Sara Ramírez's performance inspired me as well as millions of fans each week." [35]

Ramírez turned producer with the 2016 teen comedy film, Loserville. The project was released in partnership with the Pacer Foundation's Center for Bullying Prevention & Stomp Out Bullying. [36] 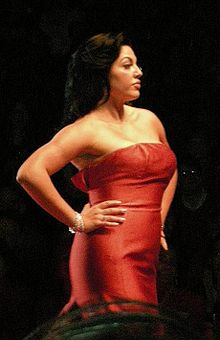 Ramirez at a charity fashion show to benefit The Heart Truth.

In September 2016, Ramirez donated their hair to Locks of Love, an organization that makes wigs for children who suffer from medical conditions that lead to hair loss. Afterward, they sported a buzz cut, [41] styled as an undercut.

In October 2016, Ramirez stated that they identified as queer and bisexual at the True Colors Fund's 40 To None Summit (now known as the Impact Summit) [42] in Los Angeles, California. [43] [44] In an email to The Huffington Post, they wrote that their decision to come out publicly was a "very organic and natural" one. [45] In August 2020, Ramirez said they identified as non-binary. They use she/they pronouns. [46]

Ramirez released their first single, a rendition of Silent Night, in 2009. [47] The song was featured in the tenth episode of the sixth season of Grey's Anatomy. Their debut, self-titled, extended play came out in March 2011 on the iTunes Store under the label of Atrevida Records. The EP included four songs, including a cover of " The Story", which was originally recorded by Brandi Carlile in their 2007 album. Two of the three songs were co-written by Ramirez and the album's writer-producer Rob Giles. [48] [49] Sara Ramirez debuted at number thirty-seven on the Billboard 200, number nine on Billboard's Independent Albums chart, and number thirty-eight on the Canadian Albums Chart. [50] [51] [52] "The Story" debuted the same week at number 69 on the Billboard Hot 100, number 72 on the Canadian Hot 100, and number 34 on the Irish Singles Chart. [53] [54] [55] Soundtracks for Monty Python's Spamalot (Original Broadway Cast Recording) (2005) and Grey's Anatomy: The Music Event (2011) were released under the labels of Decca Records and ABC Studios respectively. [56] [57]

Ramirez is an activist and extensively campaigns for LGBT rights. They are a member of the True Colors United board of directors and The Task Force, and the San Diego, New York, and San Francisco LGBT Centers. They spoke in support of homeless LGBTQ youth at a True Colors Fund conference. [45] In addition, Ramirez supports other groups including BiNetUSA, Bisexual Organizing Project, American Institute of Bisexuality, NDLON, and Mujerez De Maiz. In 2015, they were awarded the Ally for Equality Award by the Human Rights Campaign Foundation. [36]

Main article: List of roles and awards of Sara Ramirez

Ramirez won the Tony Award for Best Performance by a Featured Actress in a Musical and the Outstanding Featured Actress in a Musical for their role in the 2005 Broadway musical Spamalot. [14] They gained widespread acclaim for their portrayal of Dr. Callie Torres in ABC's medical drama Grey's Anatomy. They garnered nominations for the Best Actress at the NAACP Image Award, the ALMA Award, and won the Screen Actors Guild Award for Outstanding Performance by an Ensemble in a Drama Series. [33] [30] [31]