Donaldson was born in El Paso, Texas, the son of Chloe (née Hampson), a school teacher, and Samuel Donaldson, a farmer. He grew up on the family farm in Chamberino, New Mexico, which his father had bought in 1910, two years before New Mexico was admitted to the Union.

He attended New Mexico Military Institute as well as Texas Western College (now known as University of Texas at El Paso) where he served as station manager of KTEP, the campus radio station, and joined the Kappa Sigma fraternity. [2] From 1956 to 1959, Donaldson served on active duty as an artillery officer in the United States Army, attaining the rank of Captain (USAR). While on active duty in 1958, Donaldson was one of the military observers of an atomic test in the Nevada testing grounds when an atomic device, with a yield roughly equivalent to the bombs dropped on Japan, was detonated three thousand yards away from the slit trench protecting the observers.

Following military service, Donaldson was hired by KRLD-TV (now KDFW-TV), the then-CBS television affiliate in Dallas, Texas. After a year, he resigned and moved to New York City to look for a job in broadcast news. He failed to get one.

He was hired by WTOP-TV (currently WUSA-TV) in Washington, D.C., in February 1961. He covered both local and national stories, including the Goldwater Presidential Campaign in 1964, the Senate debates on the civil rights bill in March 1964, and the Medicare bill the next year. He anchored the 6:00 pm Saturday and Sunday evening newscasts with John Douglas doing the weather forecasts. 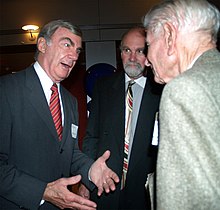 Donaldson was hired by ABC News as a Washington correspondent in October 1967. He covered the two major party political conventions in 1968 and in 1969 began anchoring the network's 11:00 pm Saturday and Sunday newscasts.

In 1971, Donaldson covered the Vietnam War for ABC News. He was ABC's chief Watergate correspondent in 1973–74, covering the trial of the Watergate burglars, the Senate Watergate hearings and the House Judiciary Committee's impeachment investigation of President Nixon.

Donaldson covered Jimmy Carter's 1976 presidential campaign and became the network's White House Correspondent in January 1977, a post he held until January 1989. One of his most widely remembered questions during his tenure at the White House came during the Reagan administration: "Mr. President, in talking about the continuing recession tonight, you have blamed mistakes of the past, and you have blamed the congress. Does any of the blame belong to you?" To which Reagan retorted: "Yes, because for many years I was a Democrat!"

Donaldson appeared as a panelist on the Sunday morning television program This Week with David Brinkley from its inception in 1981 and after Brinkley's retirement in 1996 co-anchored the This Week program with Cokie Roberts until the two were replaced in September 2002 by George Stephanopoulos. He still occasionally serves as a panelist on This Week.

Donaldson anchored the ABC Sunday Evening News from its inception in 1979 until August 1989.

Donaldson co-anchored the network's magazine program Primetime Live with Diane Sawyer from 1989 to 1999. One of his reports featured a Nazi Gestapo officer named Erich Priebke who had escaped to Argentina after World War II. Donaldson's team located Priebke in 1994, and Donaldson interviewed him on a street in Bariloche, Argentina, about his role in the execution of 335 Italian civilians on the direct orders of Adolf Hitler in the caves outside Rome. [3] When the report aired, Italy demanded Priebke's extradition and Argentina eventually complied. Priebke was sentenced to life in prison in Italy for his crimes. [4]

In August 1992, Donaldson and his producer David Kaplan went to Sarajevo on assignment. On the way into town from the airport, Kaplan, riding in a second vehicle, was shot to death by a sniper. That night from Belgrade, Donaldson, co-anchoring the program Primetime Live, reported on Kaplan's death.

In January 1997, Donaldson was once again assigned to the White House as the network's chief correspondent there and served until mid-1999. He covered the Lewinsky scandal and the impeachment of President Clinton.

On August 2, 2006, during the last White House Press conference in the briefing room before undergoing major renovations, Donaldson shouted, "Mr. President, should Mel Gibson be forgiven?", referencing reports of the actor/producer's alleged anti-Semitic remarks. President George W. Bush laughed and looked up to see who had asked the question. Bush joked, "Is that Sam Donaldson? Forget it ... you're a 'has-been'! We don't have to answer has-beens' questions." [5] Donaldson replied, "Better to have been a has-been than a never-was." [6]

With the exception of the Republican convention in August 1992, Donaldson covered every major political party convention from 1964-2012, until he retired from ABC in 2013.

Donaldson was voted Best White House Correspondent in 1985 by readers of the Washington Journalism Review and Best Television Correspondent in 1986, 1987, 1988, and 1989 by readers of the same magazine. Among his other awards are four Emmys, three Peabodys, the Edward R. Murrow award 1997 (WSU), the Paul White award (RTNDA 1998), and he and his wife Jan were among those named as "Washingtonians of the Year" by Washingtonian Magazine in 2002.

In 1995, the struggle in DC over whether to cut the growing deficit touched journalist Sam Donaldson directly. Bruce Ingersoll, award-winning journalist for the Chicago Sun and Wall Street Journal, published a column entitled "As Congress Considers Slashing Crop Subsidies, Affluent Urban Farmers Come Under Scrutiny", where he named Donaldson as one of the wealthy, absentee beneficiaries of Federal subsidies, the "third largest recipient" of Federal funds in his area.

During the debate in Congress over whether to cut " pork", this article was read into the record, [7] and Donaldson was chastised by Senator Al D'Amato to "Give the money back", a phrase repeated multiple times in his floor speech and elsewhere.

There were claims that Donaldson received as much as one million dollars in subsidies. [8] The real number turned out to be around $188,000, [9] but the scandal of a millionaire receiving money for a farm on which he was "absentee" still got significant public coverage [10]

The subsidy was held up as a sign of how meaningless much of the pork was, as the Federal government had stopped using mohair for uniforms in 1960, after only seven years of subsidies, but was still subsidizing its production over three decades later, and apparently giving out money to people other than "poor family farmers". Even the Department of Agriculture was on record as wanting the program ended. [11] [12]

Donaldson initially refused to comment, but eventually defended himself by describing the mohair subsidy as "built into the price of sheep", and claimed he had "argued against subsidies for years" and was glad when the program was finally "killed", though in fact mohair subsidies continued all the way to 2012. [13] [14]

Only a year later, Donaldson was embroiled in another Federal aid scandal. While still receiving Federal mohair subsidies, it was revealed that he was also using Federal resources to kill prairie dogs, bobcats, foxes, and coyotes on his ranch. [15] [16] His farm was reported to have used the USDA's Animal Damage Control agents 412 times in only 5 years [17] This sparked outrage among both deficit hawks and animal rights activists. [18]

This was actually brought to light by Donaldson's own demands for more Federal money. He claimed to have lost a number of sheep to predators despite the heavy use of Federal resources, and therefore wanted Federal money to pay for his losses: "The government helps ranchers and farmers and businesses of all kinds. If it's in existence and I am eligible to use it, I'll use it." [19]

In an interview, Donaldson said of the animal rights complaints:

What are we going to do about the coyotes, that are eating the lambs like there's no tomorrow? They're eating so many lambs, I thought the other day I'd put out some mint jelly, in case they want it with their mutton. Every time I say this, the conservationists and the people who love animals just jump all over me. "What? A coyote is a predator and has a right to live." Yeah, they have a right to live, I'm all for that, but they're eating my lambs, folks. I just put it to you, doesn't the lamb have a right to live? "Yeah, but you're going to sell the lamb and they're going to kill the lamb for the money." That's right. If you're going to be in the sheep ranching business, you have to try to get rid of the coyotes. Otherwise, you're not going to stay in the ranching business. [20]

Donaldson has been married to Sandra Martorelli Donaldson since December 2014. They live in Albuquerque, New Mexico.

Donaldson's marriage to Jan Smith ended in divorce in 2014.

In 1995, Donaldson had a melanoma removed from a lymph node. Since then, he has been an active supporter of cancer research. [26]

Donaldson operates a family cattle ranch in Lincoln County, New Mexico. On July 5, 2004, three members of the ranch foreman's family were found murdered. Cody Posey, a 14-year-old and sole remaining survivor of the family, was arrested and charged with the murders and subsequently convicted and sentenced to juvenile detention until age 21. On October 8, 2010, Cody Posey was released. [27]

Donaldson appears in the 2008 political documentary about Lee Atwater, entitled Boogie Man: The Lee Atwater Story. In the film, he says, "An operative never comes and says, ‘here is a story I’d like you to run for me, but just in private conversation, did you know this about so and so, we’re still checking it mind you, but, but it’s probably going to turn out to be true.’ Well, you don’t want to be beaten by your competition and wait until they announce it. They put it on the conveyor belt and you just run it out.”

Donaldson is a past member of the board of directors of the Library of American Broadcasting, the American Academy of Achievement boards; the past president of the advisory board of the Woodrow Wilson International Center for Scholars; and chairman emeritus of the advisory board of the H. Lee Moffitt Cancer Center in Tampa, Florida. He is currently a member of the Board of New Mexico First, the State's bi-partisan booster organization, and the Ford Theater Advisory Council.

On December 1, 2012, Donaldson was arrested for driving under the influence of alcohol [28] in Lewes, Delaware. [29] Charges were dropped on Friday, November 8, 2013, by a Delaware judge, citing lack of probable cause for the arrest. [30]