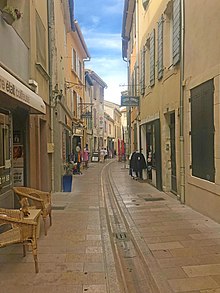 Saint-Rémy-de-Provence (French pronunciation: ​ [sɛ̃ ʁemi də pʁɔvɑ̃s]; Provençal Occitan: Sant Romieg de Provença in classical and Sant Roumié de Prouvènço in Mistralian norms) is a commune in the Bouches-du-Rhône department in the Provence-Alpes-Côte d'Azur region in Southern France. Located in the northern part of the Alpilles, of which it is the main town, it had a population of 9,893 in 2017.

The town, which has been inhabited since Prehistory, was named after Saint Remigius under the Latin name Villa Sancti Remigii.

From May 1889 to May 1890, Vincent van Gogh was a patient at the Saint-Paul Asylum in Saint-Rémy-de-Provence, and painted some of his most memorable works, including The Starry Night, which features the town.

Some of Vincent van Gogh's paintings in Saint-Rémy

Saint-Rémy-de-Provence is situated about 20 km (12 mi) south of Avignon, just north of the Alpilles mountain range.

The Avignon-TGV high-speed train station is 20 km from the city. The closest airports are located in Avignon, Nîmes, and Marseille. Also, there are several highways and main roads which serve Saint-Remy. The A7 autoroute, which runs down the Rhone valley and connects Lyon to Marseille via Orange is about 12 km (7.5 mi) east of Saint Remy. The A54 autoroute runs from Nîmes to Salon-de-Provence, and passes through Arles, 17 km (11 mi)away. Finally, the A9 is 20 km to the north-west and runs from Orange to Perpignan via Montpelier.

The climate in the Alpilles is considered Mediterranean. Winters there are gentle and dry, and summers are hot and dry. The highest average temperature is recorded in July and August 29 °C (84 °F), and the lowest in December and January 3 °C (37 °F). The rainiest month is January with an average of 7 rainy days, compared with July, the driest month, with an average of 2 rainy days. The Alpilles region receives more precipitation than the French Rivera, 1–2 cm more per year. There are about 30 days of frost per year. Snow is rare, but can be heavy when it does fall.

The ruins of the Roman city of Glanum, including a triumphal arch, can still be seen on the southern outskirts of the city.

The Saint-Paul Asylum in Saint-Rémy-de-Provence is where Vincent van Gogh was a patient, from May 1889 to May 1890, and where he painted some of his most memorable works, including The Starry Night which features the town. The site is now named the Clinique Van Gogh for him. [3]