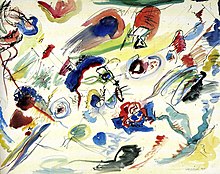 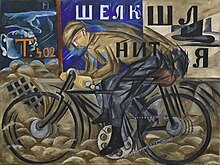 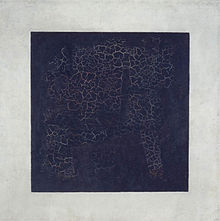 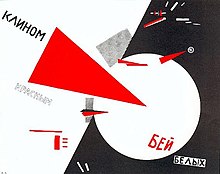 Proletkult. El Lissitzky, Beat the Whites With the Red Wedge, 1919 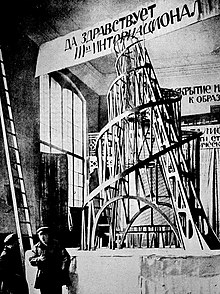 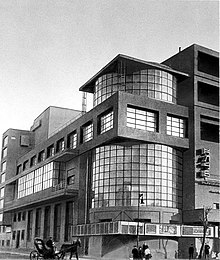 The Russian avant-garde was a large, influential wave of avant-garde modern art that flourished in the Russian Empire and the Soviet Union, approximately from 1890 to 1930—although some have placed its beginning as early as 1850 and its end as late as 1960. The term covers many separate, but inextricably related, art movements that flourished at the time; including Suprematism, Constructivism, Russian Futurism, Cubo-Futurism, Zaum and Neo-primitivism. [2] [3] [4] [5] Many of the artists who were born, grew up or were active in what is now Belarus and Ukraine (including Kazimir Malevich, Aleksandra Ekster, Vladimir Tatlin, Wassily Kandinsky, David Burliuk, Alexander Archipenko), are also classified in the Ukrainian avant-garde. [6]

The Russian avant-garde reached its creative and popular height in the period between the Russian Revolution of 1917 and 1932, at which point the ideas of the avant-garde clashed with the newly emerged state-sponsored direction of Socialist Realism. [7]

Notable figures from this era include:

One of the few writers for example, like the novelist, short story writer and essayist, Yevgeny Zamyatin (1884–1937), did not fully devote his writing career into experimenting with Russian avant-garde art, while instead, he decided of advocating and praising for the avant-garde movement, as a resistance to the becoming censorship of independent literary ideas in published and purchasable books in the U.S.S.R. [8] He gave form for his ideas by writing books and pamphlets about the negatives of the singular ideology which was the state sponsored " socialist realism" and his opposition towards it. One of his quotes, "In art the surest way to destroy, is to canonize one given form and one philosophy," (Essay - The New Russian Prose.) [9] is one proof of his anti-totalitarian stance which is present throughout his whole literary career, most popularly in his novel We and his essay works. He particularly wrote about how can there be a beneficially progressive and developmental relationship between societies and the free expression of art, "But harmful literature is more useful than useful literature, for it is anti-entropic, it is a means of combating calcification, sclerosis, crust, moss, calmness" (Essay - Literature, Revolution, Entropy). [10] Yevgeny Zamyatin's We and its ideological support for freedom for oneself and government, would influence writers in Western Europe and the U.S.A. (e.g. George Orwell's " 1984," Kurt Vonnegut's " Player Piano," etc.) [11]

Many Russian composers that were interested in avant-garde music became members of the Association for Contemporary Music which was headed by Roslavets.