Rupert Chawner Brooke (3 August 1887 – 23 April 1915) [1] was an English poet known for his idealistic war sonnets written during the First World War, especially The Soldier. He was also known for his boyish good looks, which were said to have prompted the Irish poet W. B. Yeats to describe him as "the handsomest young man in England". [2] [3]

Brooke was born at 5 Hillmorton Road, Rugby, Warwickshire, [4] [5] and named after a great-grandfather on his mother's side, Rupert Chawner (1750–1836), a distinguished doctor descended from the regicide Thomas Chaloner [6] (the middle name has however sometimes been erroneously given as "Chaucer"). [7] He was the third of four children of William Parker "Willie" Brooke, a schoolmaster (teacher), and Ruth Mary Brooke, née Cotterill, a school matron. Both parents were working at Fettes College in Edinburgh when they met. They married on 18 December 1879. William Parker Brooke had to resign after the couple wed as there was no accommodation there for married masters. The couple then moved to Rugby in Warwickshire where Rupert's father became Master of School Field House at Rugby School a month later. His eldest brother was Richard England "Dick" Brooke (1881–1907), his sister Edith Marjorie Brooke was born in 1885 and died the following year, and his youngest brother was William Alfred Cotterill "Podge" Brooke (1891–1915). [8]

Brooke attended preparatory (prep) school locally at Hillbrow, and then went on to Rugby School. At Rugby he was romantically involved with fellow pupils Charles Lascelles, Denham Russell-Smith and Michael Sadleir. [9] In 1905, he became friends with St. John Lucas, who thereafter became something of a mentor to him. [8]

In October 1906 he went up to King's College, Cambridge to study Classics. There he became a member of the Apostles, was elected as president of the university Fabian Society, helped found the Marlowe Society drama club and acted, including in the Cambridge Greek Play. The friendships he made at school and university set the course for his adult life, and many of the people he met—including George Mallory—fell under his spell. [10] Virginia Woolf told Vita Sackville-West that she had gone skinny-dipping with Brooke in a moonlit pool when they were in Cambridge together. [11] In 1907, his older brother Dick died of pneumonia at age 26. Brooke planned to put his studies on hold to help his parents cope with the loss of his brother, but they insisted he return to university. [12]

A statue of Brooke in Rugby

Brooke made friends among the Bloomsbury group of writers, some of whom admired his talent while others were more impressed by his good looks. He also belonged to another literary group known as the Georgian Poets and was one of the most important of the Dymock poets, associated with the Gloucestershire village of Dymock where he spent some time before the war. This group included both Robert Frost and Edward Thomas. He also lived at the Old Vicarage, Grantchester, which stimulated one of his best-known poems, named after the house, written with homesickness while in Berlin in 1912. While travelling in Europe he prepared a thesis, entitled " John Webster and the Elizabethan Drama", which earned him a Fellowship at King's College, Cambridge in March 1913.

Brooke suffered a severe emotional crisis in 1912, caused by sexual confusion (he was bisexual) [13] and jealousy, resulting in the breakdown of his long relationship with Ka Cox ( Katherine Laird Cox). [14] Brooke's paranoia that Lytton Strachey had schemed to destroy his relationship with Cox by encouraging her to see Henry Lamb precipitated his break with his Bloomsbury group friends and played a part in his nervous collapse and subsequent rehabilitation trips to Germany. [15]

As part of his recuperation, Brooke toured the United States and Canada to write travel diaries for the Westminster Gazette. He took the long way home, sailing across the Pacific and staying some months in the South Seas. Much later it was revealed that he may have fathered a daughter with a Tahitian woman named Taatamata with whom he seems to have enjoyed his most complete emotional relationship. [16] [17] Many more people were in love with him. [18] Brooke was romantically involved with the artist Phyllis Gardner and the actress Cathleen Nesbitt, and was once engaged to Noël Olivier, whom he met, when she was aged 15, at the progressive Bedales School.

Brooke enlisted at the outbreak of war in August 1914. He came to public attention as a war poet early the following year, when The Times Literary Supplement published two sonnets ("IV: The Dead" and "V: The Soldier") on 11 March; the latter was then read from the pulpit of St Paul's Cathedral on Easter Sunday (4 April). Brooke's most famous collection of poetry, containing all five sonnets, 1914 & Other Poems, was first published in May 1915 and, in testament to his popularity, ran to 11 further impressions that year and by June 1918 had reached its 24th impression; [19] a process undoubtedly fuelled through posthumous interest.

Brooke's accomplished poetry gained many enthusiasts and followers, and he was taken up by Edward Marsh, who brought him to the attention of Winston Churchill, then First Lord of the Admiralty. Brooke was commissioned into the Royal Naval Volunteer Reserve as a temporary sub-lieutenant [20] shortly after his 27th birthday and took part in the Royal Naval Division's Antwerp expedition in October 1914. 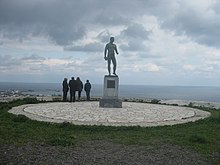 Brooke sailed with the British Mediterranean Expeditionary Force on 28 February 1915 but developed pneumococcal sepsis from an infected mosquito bite. French surgeons carried out two operations to drain the abscess but he died of septicaemia at 4:46 pm on 23 April 1915, on the French hospital ship Duguay-Trouin, moored in a bay off the Greek island of Skyros in the Aegean Sea, while on his way to the landings at Gallipoli. As the expeditionary force had orders to depart immediately, Brooke was buried at 11 pm in an olive grove on Skyros. [7] [1] [21] The site was chosen by his close friend, William Denis Browne, who wrote of Brooke's death: [22]

I sat with Rupert. At 4 o’clock he became weaker, and at 4.46 he died, with the sun shining all round his cabin, and the cool sea breeze blowing through the door and the shaded windows. No one could have wished for a quieter or a calmer end than in that lovely bay, shielded by the mountains and fragrant with sage and thyme.

Another friend and war poet, Patrick Shaw-Stewart, assisted at his hurried funeral. [23] His grave remains there still, with a monument erected by his friend Stanley Casson, [24] poet and archaeologist, who in 1921 published Rupert Brooke and Skyros, a "quiet essay", illustrated with woodcuts by Phyllis Gardner. [25]

On 11 November 1985, Brooke was among 16 First World War poets commemorated on a slate monument unveiled in Poets' Corner in Westminster Abbey. [26] The inscription on the stone was written by a fellow war poet, Wilfred Owen. It reads: "My subject is War, and the pity of War. The Poetry is in the pity." [27]

The wooden cross that marked Brooke's grave on Skyros, which was painted and carved with his name, was removed when a permanent memorial was made there. His mother, Mary Ruth Brooke, had the cross brought to Rugby, to the family plot at Clifton Road Cemetery. Because of erosion in the open air, it was removed from the cemetery in 2008 and replaced by a more permanent marker. The Skyros cross is now at Rugby School with the memorials of other Old Rugbeians. [28]

Brooke's surviving brother, William Alfred Cotterill Brooke, fell in action on the Western Front on 14 June 1915 as a subaltern with the 1/8th (City of London) of the London Regiment ( Post Office Rifles), at the age of 24 years. He had been in France on active service for nineteen days before meeting his death. His body was buried in Fosse 7 Military Cemetery (Quality Street), Mazingarbe. [29]

In July 1917 Field Marshal Edmund Allenby was informed of the death in action of his son Michael Allenby, leading to Allenby's break down in tears in public while he recited a poem by Rupert Brooke.

The first stanza of " The Dead" is inscribed onto the base of the Royal Naval Division War Memorial in London. [30]

American adventurer Richard Halliburton made preparations for writing a biography of Brooke, meeting his mother and others who had known the poet, and corresponding widely and collecting copious notes, but he died before writing the manuscript. [31] Halliburton's notes were used by Arthur Springer to write Red Wine of Youth: A Biography of Rupert Brooke. [32]

Blow out you bugles, detail on Memorial Arch (by John M. Lyle) at Royal Military College of Canada

However, in 1919, Lord Alfred Douglas (in the afterword of his Collected Poems) wrote: "... never before in the history of English literature has poetry sunk so low. When a nation which has produced Shakespeare and Marlowe and Chaucer and Milton and Shelley and Wordsworth and Byron and Keats and Tennyson and Blake can seriously lash itself into enthusiasm over the puerile crudities (when they are nothing worse) of a Rupert Brooke, it simply means that poetry is despised and dishonoured and that sane criticism is dead or moribund." [33]