The Royal Academy of Arts (RA) is an art institution based in Burlington House on Piccadilly in London. Founded in 1768, it has a unique position as an independent, privately funded institution led by eminent artists and architects. Its purpose is to promote the creation, enjoyment and appreciation of the visual arts through exhibitions, education and debate. 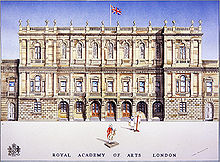 A modern illustration of Burlington House in London, home of the Royal Academy of Arts

The success of St Martin's Lane Academy led to the formation of the Society of Artists of Great Britain and the Free Society of Artists. [4] Sir William Chambers, a prominent architect and head of the British government's architects' department, the Office of Works, used his connections with King George III to gain royal patronage and financial support for the Academy. [5] The Royal Academy of Arts was founded through a personal act of King George III on 10 December 1768 with a mission "to establish a school or academy of design for the use of students in the arts" with an annual exhibition. [6]

Satirical drawing of Sir William Chambers, one of the founders, trying to slay the 8-headed hydra of the Incorporated Society of Artists

The painter Joshua Reynolds was made its first president, [7] and Francis Milner Newton was elected the first secretary, [8] a post he held for two decades until his resignation in 1788. [9]

Study for Henry Singleton's painting The Royal Academicians assembled in their council chamber to adjudge the Medals to the successful students in Painting, Sculpture, Architecture and Drawing, which hangs in the Royal Academy. Ca. 1793.

The Royal Academy was initially housed in cramped quarters in Pall Mall, although in 1771 it was given temporary accommodation for its library and schools in Old Somerset House, then a royal palace. [11] In 1780 it was installed in purpose-built apartments in the first completed wing of New Somerset House, designed by Chambers, located in the Strand and designed by Chambers, the Academy's first treasurer. [11] The Academy moved in 1837 to Trafalgar Square, where it occupied the east wing of the recently completed National Gallery (designed by another Academician, William Wilkins). [12] These premises soon proved too small to house both institutions. In 1868, 100 years after the Academy's foundation, it moved to Burlington House, Piccadilly, where it remains. [13]

The first Royal Academy exhibition of contemporary art, open to all artists, opened on 25 April 1769 and ran until 27 May 1769. 136 works of art were shown and this exhibition, now known as the Royal Academy Summer Exhibition, has been staged annually without interruption to the present day. Following the cessation of a similar annual exhibition at the British Institution, the Academy expanded its exhibition programme to include a temporary annual loan exhibition of Old Masters in 1870. [14]

Britain's first public lectures on art were staged by the Royal Academy, as another way to fulfil its mission. Led by Reynolds, the first president, the first program included a lecture by Dr. William Hunter. [15]

In 2018, the Academy's 250th anniversary, the results of a major refurbishment were unveiled. The project began on 1 January 2008 with the appointment of David Chipperfield Architects. Heritage Lottery Fund support was secured in 2012. On 19 October 2016 the RA's Burlington Gardens site was closed to the public and renovations commenced. Refurbishment work included the restoration of 150 sash windows, glazing upgrades to 52 windows and the installation of two large roof lights. [16] The "New RA" was opened to the public on 19 May 2018. The £56 million development includes new galleries, a lecture theatre, a public project space for students and a bridge linking the Burlington House and Burlington Gardens sites. As part of the process 10,000 works from the RA's collection were digitised and made available online. [17] [18] 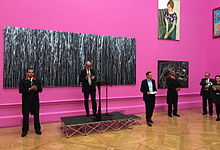 Christopher Le Brun, president of the RA, on "Varnishing Day", or the artists' opening of the Summer Exhibition, 2015

The Royal Academy does not receive funding from the state or the Crown. However, its home in Burlington House is owned by the UK government and provided to the Academy on a peppercorn rent on a lease of 999 years. [19] This represents a considerable public subsidy. Its income is from exhibitions, trust and endowment funds, receipts from its trading activities, and from the subscriptions of its friends and corporate members. It also gains funds by sponsorship from commercial and industrial companies, in which the Academy. It operates as a charity. [20]

One of its principal sources of revenue is hosting a programme of temporary loan exhibitions. These are comparable to those at the National Gallery, the Tate Gallery and leading art galleries outside the United Kingdom. In 2004 the highlights of the Academy's permanent collection went on display in the newly restored reception rooms of the original section of Burlington House, which are now known as the John Madejski Fine Rooms. [21]

Under the direction of the former exhibitions secretary Norman Rosenthal, the Academy has hosted ambitious exhibitions of contemporary art. In its 1997 " Sensation," it displayed the collection of work by Young British Artists owned by Charles Saatchi. The show was controversial for its display of Marcus Harvey's portrait of Myra Hindley, a convicted murderer. The painting was vandalised while on display. [22]

In 2004, the Academy attracted media attention for a series of financial scandals and reports of a feud between Rosenthal and other senior staff. These problems resulted in the cancellation of what were expected to have been profitable exhibitions. [23] In 2006, it attracted the press by erroneously placing only the support for a sculpture on display, and then justifying it being kept on display. [24]

The Academy also hosts an annual Royal Academy summer exhibition of new art, which is a well-known event on the London social calendar. Tracey Emin exhibited in the 2005 show. In March 2007 Emin accepted the Academy's invitation to become a Royal Academician, commenting in her weekly newspaper column that, "It doesn't mean that I have become more conformist; it means that the Royal Academy has become more open, which is healthy and brilliant." [25]

In 1977 Sir Hugh Casson founded the Friends of the Royal Academy, a charity designed to provide financial support for the institution. [26]

The RA and Pin Drop Short Story Award is an open submission writing prize, held annually along similar principles of the Royal Academy Summer Exhibition. The award ceremony features a live reading of the winning story in its entirety by a special guest. Past winning stories have been read by Stephen Fry, Dame Penelope Wilton, Juliet Stevenson and Gwendoline Christie. [28]

Main article: List of officers of the Royal Academy of Arts

On 10 December 2019, Rebecca Salter was elected the first female President of the Royal Academy [29] on the retirement of Christopher Le Brun. [30]

In September 2007, Sir Charles Saumarez Smith became Secretary and Chief Executive of the Royal Academy, a newly created post. [31] Saumarez Smith stepped down from the role at the end of 2018, and it was announced that Axel Rüger, director of the Van Gogh Museum in Amsterdam, would fill the position from June 2019. [32]

The Royal Academy Schools form the oldest art school in Britain, and have been an integral part of the Royal Academy of Arts since its foundation in 1768. A key principle of the RA Schools is that their three-year post graduate programme is free of charge to every applicant offered a place. [33] 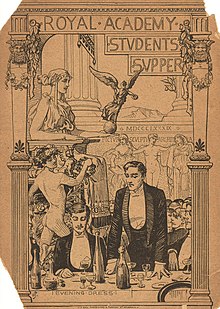 The Royal Academy Schools was the first institution to provide professional training for artists in Britain. The Schools' programme of formal training was modelled on that of the French Académie de peinture et de sculpture, founded by Louis XIV in 1648. It was shaped by the precepts laid down by Sir Joshua Reynolds. In his fifteen Discourses delivered to pupils in the Schools between 1769 and 1790, Reynolds stressed the importance of copying the Old Masters, and of drawing from casts after the Antique and from the life model. He argued that such a training would form artists capable of creating works of high moral and artistic worth. Professorial chairs were founded in Chemistry, Anatomy, Ancient History and Ancient Literature, the latter two being held initially by Samuel Johnson and Oliver Goldsmith. [34]

In 1769, the first year of operation, the Schools enrolled 77 students. By 1830 over 1,500 students had enrolled in the Schools, giving an average intake of 25 students each year. They included men such as John Flaxman, J. M. W. Turner, John Soane, Thomas Rowlandson, William Blake, Thomas Lawrence, Decimus Burton, [35] John Constable, George Hayter, David Wilkie, William Etty, Edwin Landseer. and Charles Lucy in 1838. [36] The first woman to enrol as a student of the Schools was Laura Herford in 1860. [37] Charles Sims was expelled from the Schools in 1895. [38] The Royal Academy made Sir Francis Newbolt the first Honorary Professor of Law in 1928. [39] [40]

The first president of the Royal Academy, Sir Joshua Reynolds, gave his noted self-portrait, beginning the Royal Academy collection. This was followed by gifts from other founding members, such as Gainsborough and Benjamin West. Subsequently, each elected Member was required to donate an artwork (known as a "Diploma Work") typical of his or her artistic output, and this practice continues today. Additional donations and purchases have resulted in a collection of approximately a thousand paintings and a thousand sculptures, which show the development of a British School of art. The Academy's collection of works on paper includes significant holdings of drawings and sketchbooks by artists working in Britain from the mid-18th century onwards, including George Romney, Lord Leighton and Dame Laura Knight. [45]

The photographic collection consists of photographs of Academicians, landscapes, architecture and works of art. Holdings include early portraits by William Lake Price dating from the 1850s, portraits by David Wilkie Wynfield and Eadweard Muybridge's Animal Locomotion (1872–85). [46]

Among the paintings decorating the walls and ceilings of the building are those of Benjamin West and Angelica Kauffman, in the entrance hall (Hutchison 1968, p. 153), moved from the previous building at Somerset House. In the centre is West's roundel The Graces unveiling Nature c. 1779, [47] surrounded by panels depicting the elements, Fire, Water, Air and Earth. [48] At each end are mounted two of Kauffman's circular paintings, Composition at the West end, and Painting or Colour and Genius or Invention at the East end. [49] 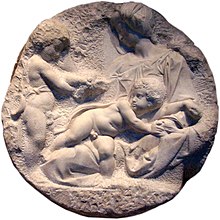 The Virgin and Child with the Infant St John
Main article: Taddei Tondo

The most prized possession of the Academy's collection is Michelangelo's Taddei Tondo, left to the Academy by Sir George Beaumont. The Tondo is usually on display in the Collection Gallery, which opened in May 2018. Carved in Florence in 1504–06, it is the only marble by Michelangelo in the United Kingdom and represents the Virgin Mary and child with the infant St John the Baptist. [50]

In the entrance portico are two war memorials. One is in memory of the students of the Royal Academy Schools who fell in World War I [51] and the second commemorates the 2,003 men of the Artists Rifles who gave their lives in that war with a further plaque to those who died in World War II. [52] 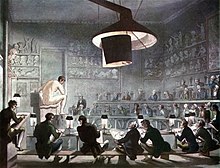 Life at the Royal Academy of Arts, from Microcosm of London, c. 1808