Roy Owen Haynes (born March 13, 1925) is an American jazz drummer. [1] He is among the most recorded drummers in jazz. In a career lasting over 75 years he has played swing, bebop, jazz fusion, avant-garde jazz and is considered a father of modern jazz drumming. "Snap Crackle" was a nickname given to him in the 1950s.

He has led bands such as the Hip Ensemble. [1] His albums Fountain of Youth [2] and Whereas [3] were nominated for a Grammy Award. He was inducted into the Modern Drummer Hall of Fame in 1999. [4] His son Graham Haynes is a cornetist; his son Craig Holiday Haynes and grandson Marcus Gilmore are both drummers. 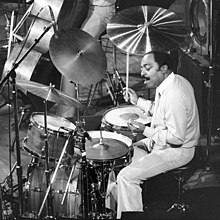 Haynes was born in the Roxbury section of Boston, Massachusetts. His younger brother, Michael E. Haynes, would become an important leader in the black community of Massachusetts, working with Martin Luther King Jr. during the civil rights movement, representing Roxbury in the Massachusetts House of Representatives, and for forty years serving as pastor of the Twelfth Baptist Church, where King had been a member while he pursued his doctoral degree at Boston University.

Haynes made his professional debut in 1944 in his native Boston and began his full-time professional career in 1945. From 1947 to 1949 he worked with saxophonist Lester Young, and from 1949 to 1952 was a member of saxophonist Charlie Parker's quintet. He also recorded at the time with pianist Bud Powell and saxophonists Wardell Gray and Stan Getz. From 1953 to 1958 he toured with singer Sarah Vaughan and recorded with her.

A tribute song was recorded by Jim Keltner and Charlie Watts of the Rolling Stones, [5] and he appeared on stage with the Allman Brothers Band in 2006 [6] and Page McConnell of Phish in 2008. [7] "Age seems to have just passed him by," Watts observed. "He's eighty-three and in 2006 he was voted Best Contemporary Jazz Drummer [in Modern Drummer magazine's readers' poll]. He's amazing." [8]

In 2008, Haynes lent his voice to the 2008 open-world video game, Grand Theft Auto IV to voice himself as the DJ for the fictional contemporary jazz radio station, Jazz Nation Radio 108.5. [9]

On June 25, 2019, The New York Times Magazine listed Haynes among hundreds of artists whose material was destroyed in the 2008 Universal fire. [10]

Haynes continues to celebrate his birthday by playing at the Blue Note Jazz Club in New York City.

Esquire named Roy Haynes one of the Best Dressed Men in America in 1960, along with Fred Astaire, Miles Davis, Clark Gable, and Cary Grant. [14]

In 1994, Haynes was awarded the Danish Jazzpar prize, and in 1996 the French government knighted him with the Chevalier de l'Ordre des Arts et des Lettres" France's top literary and artistic honor. Haynes received honorary doctorates from the Berklee College of Music (1991), and the New England Conservatory (2004), as well as a Peabody Medal, the highest honor bestowed by the Peabody Institute of The Johns Hopkins University, in 2012. He was inducted into the Down Beat magazine Hall of Fame in 2004. On October 9, 2010, he was awarded the Mid Atlantic Arts Foundation's BNY Mellon Jazz Living Legacy Award at the Kennedy Center for the Performing Arts in Washington, DC.

In 2001, Haynes' album Birds of a Feather: A Tribute to Charlie Parker was nominated for the 44th Annual Grammy Awards as Best Jazz Instrumental Album. [15] On December 22, 2010, he was named a recipient of a Grammy Lifetime Achievement Award by the National Academy of Recording Arts and Sciences, [16] and he received the award at the Special Merit Awards Ceremony & Nominees Reception of the 54th Annual Grammy Awards on February 12, 2012.

In 2019, Haynes was given the Lifetime Achievement Award by the Jazz Foundation of America at the 28th Annual Loft Party. [17] 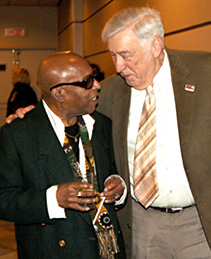