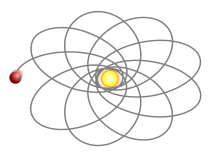 Example of an exaggerated Rosetta orbit

A Rosetta orbit is a complex type of orbit.

In astronomy, a Rosetta orbit occurs when an object approaching a black hole with an intermediate velocity (not slow enough to spiral into the hole and not fast enough to escape) enters a complex orbit pattern, bounded by a near and far distance to the hole and tracing an oscillating pattern known as a hypotrochoid. In 2020, scientists using observations made by the European Southern Observatory's Very Large Telescope revealed for the first time that star S2 orbits in this pattern around Sagittarius A*. [1] [2]

In quantum mechanics, the Rosetta orbit is a solution for spherically symmetric (except 1/r) potentials.