From Wikipedia
https://en.wikipedia.org/wiki/River_Wye
This article is about the river that flows, in part, along or close to the Anglo-Welsh border. For other rivers called Wye, see River Wye (disambiguation).
river in Wales and England

The River Wye ( Welsh: Afon Gwy) is the fourth-longest river in the UK, stretching some 250 kilometres (155 miles) from its source on Plynlimon in mid Wales to the Severn estuary. [1] For much of its length the river forms part of the border between England and Wales. The Wye Valley (lower part) is designated an Area of Outstanding Natural Beauty. [2] [3] The Wye is important for nature conservation and recreation but is severely impacted by pollution. [4] [5]

The meaning of the name is not clear. Possibly the earliest reference to the name is Guoy in Nennius' early 9th Century Historia Brittonum and the modern Welsh name is Gwy. The Wye was much later given a Latin name Vaga, an adjective meaning 'wandering'. [6] [7] [8] The Tithe map references a Vagas Field in both Whitchurch and Chepstow. [9] Philologists such as Edward Lye and Joseph Bosworth in the 18th and early 19th centuries [10] suggested an Old English derivation from wæg, "wave".

The source of the Wye is in the Welsh mountains at Plynlimon. It flows through or past several towns and villages including Rhayader, Builth Wells, Hay-on-Wye, Hereford (the only city on the River Wye), Ross-on-Wye, Symonds Yat, Monmouth and Tintern, meeting the Severn estuary just below Chepstow. The lower 16 miles (26 km) of the river from Redbrook to Chepstow forms the border between England and Wales.

The River Wye is protected by two Sites of Special Scientific Interest, one covering the Upper Wye (Gwy Uchaf) above Hay-on-Wye, [11] and one covering the Lower Wye (Gwy Isaf) downstream to Chepstow. [12] The criteria for inclusion of the river as an SSSI include geology, topography, flora, mammals, invertebrates, fish and birdlife, as the river and its tributaries constitute a large linear ecosystem. The Lower Wye SSSI is itself divided into seven units of assessment set by Natural England, and administrative responsibilities are shared between the councils of Powys, Herefordshire, Gloucestershire, and Monmouthshire. [12] The Wye abuts a range of other SSSIs in England and Wales, including the Upper Wye Gorge and Lower Wye Gorge.

It is also a Special Area of Conservation [13] [14] and one of the most important rivers in the UK for nature conservation. It is an important migration route and wildlife corridor, as well as a key breeding area for many nationally and internationally important species. The river supports a range of species and habitats covered by European Directives and those listed under Schedule 5 of the Wildlife and Countryside Act 1981. [12] In Powys the river lies within the Radnorshire Environmentally Sensitive Area. Much of the lower valley is an Area of Outstanding Natural Beauty.

The Lower Wye has been designated as a salmonid fishery under the EC Freshwater Fish Directive. [12] The Wye is largely unpolluted and used to be considered[ by whom?] one of the best rivers for salmon fishing in the United Kingdom, outside Scotland. In the 1980s and 1990s salmon in the Wye declined dramatically. In 1967 the Wye rod catch was 7,864, and as recently as 1988 it was 6,401; but by 2002 it was only 357. It is now recovering from this low in response to the extensive habitat improvement work carried out by the Wye and Usk Foundation, set up to restore the spring salmon runs. In 2015 the five-year average once again climbed above 1,000 and it is now the third best salmon river in England and Wales, surpassed only by the Tyne and Wear.[ citation needed]

The Wye was particularly famous for its large "spring" salmon that had spent three or more years at sea before returning to spawn. They used to enter the river between January and June and sometimes reached weights of over 50 pounds (23 kg), the largest recorded being 59 lb 8 oz (27.0 kg) landed after a long fight by Miss Doreen Davey from the Cowpond Pool at Winforton on 13 March 1923. The last recorded 50 lb (23 kg) rod-caught salmon from the Wye was taken in 1963 by Donald Parrish and weighed 51 lb 8 oz (23.4 kg). Since the early 2000s the spring catch has been steadily recovering and salmon of over 35 lb (16 kg) have been reported every year since 2011.

Pollution has severely impacted the river, the Wye does not meet European and national standards on river health. [4] [5] Pollution from chicken and dairy farms has become so bad the Wye has been used as an example of river pollution in the UK on Countryfile and in several national newspapers. [4] [15] [5] [16]

The Wye is dying at astonishing, heartbreaking speed. When I canoed it 10 years ago, the stones were clean. Now they are so slimy that you can scarcely stand up. In hot weather, the entire river stinks of chicken sh**, from the 10 million birds being reared in the catchment..

This pollution causes algal blooms several times a year with increasing frequency and length, depleting the oxygen in the water causing fish like brown trout, chubb and barbel as well as aquatic invertebrates and plants to suffocate to death. [15] Fish and aquatic invertebrates are the main food source for otters, kingfishers, herons, eels and other protected species.

If this goes on, we will lose everything that we treasure about the Wye. It will turn a horrible, ugly green every time it gets sunny. The fish will go, and they will be followed by our kingfishers, our dippers and our herons.

Along with many other rivers the Wye is being heavily polluted by manure from the 10 million free range chickens for eggs and meat in intensive poultry units (IPUs) in Powys and Herefordshire, contaminating the Wye's tributaries. [15] [16] [17] There are over 110 IPUs in Powys, each with over 40,000 birds. [18]

In addition runoff from dairy farms, farm slurry and silage liquor are entering the Wye, a study by the Welsh Government found that only 1% of farm slurry stores in Wales met regulations and that farms were purposely spreading slurry on fields before high rainfall leading to increased run off into waterways. [19] An investigation by Greenpeace found that Environment Agency staff cuts from austerity had reduced pollution inspections by up to one third. [5] An internal report by the Environment Agency showed that the use of a “voluntary approach” by government was leading to increased levels of river pollution across the UK. [20] Powys County Council approved the construction of 20 new free-range chicken sheds in 2019 and continues to license new chicken farms behind closed doors. [4] [15] [18]

The rise of Intensive Poultry Units in the region is totally unprecedented and in areas like Powys, we know the ammonia is coming from poultry – its levels have reverted to those in 1990. The rapid expansion of the poultry industry poses the greatest short-term threat to biodiversity in Wales that I have experienced in over 30 years.”

The Wye at Chepstow, showing the castle and the road bridge linking Monmouthshire (on the left) with Gloucestershire

The Romans constructed a bridge of wood and stone just upstream of present-day Chepstow. The River Wye has been navigable up to Monmouth since at least the early 14th century. It was improved from there to a short distance below Hereford by William Sandys in the early 1660s with locks to enable vessels to pass weirs. According to Herefordshire Council Archaeology, these were flash locks. [21] The work proved to be insufficiently substantial and in 1696 a further Act of Parliament authorised the County of Hereford to buy up and demolish the mills on the Wye and Lugg. All locks and weirs were removed, except that at New Weir forge below Goodrich, which survived until about 1815. This was paid for by a tax on the county. Weirs were removed all along the Wye in Herefordshire, making the river passable to the western boundary, and beyond it at least to Hay on Wye. A horse towing path was added in 1808, but only up to Hereford; previously, as on the River Severn, barges were man-hauled. Money was spent several times improving the River Lugg from Leominster to its confluence with the Wye at Mordiford, but its navigation is likely to have been difficult. The Wye remained commercially navigable until the 1850s, when commercial traffic moved to railways. It is still used by pleasure craft.

The Environment Agency is the navigation authority for the river. The normal tidal limit (NTL) of the river is Bigsweir and navigation below this point is under the control of the Gloucester Harbour Trustees as Competent Harbour Authority. There is a public right of navigation downstream from Hay-on-Wye. [22] Canoes are generally permitted at and downstream of Glasbury, so long as they do not disturb anglers. [23] 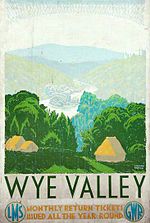 A railway poster advertising the Wye Valley as a tourist destination. Date is before 1942.

The River Wye provides for canoeing and kayaking as it has sections suitable for all ranges of skills and free access all the way downstream from Hay to Hereford and Monmouth, and the tidal Wye to Chepstow and the Severn Estuary. [24] There are a wide range of canoe hire and supervised trips, as well as campsites at key points on the river. Symonds Yat has a particularly popular series of rapids that was purchased by the British Canoe Union in 2003 to preserve the rapids for recreational use, canoe trips through the rapids stop next at Monmouth. [25] There are three rowing clubs on the river at Hereford, Ross-on-Wye and Monmouth. Annual regattas are held at Ross-on-Wye and Monmouth for rowers and scullers of all abilities, next to the local rowing club. In 2017 more than 600 people took to the River Wye in inflatables ranging from dinghies to paddling pools during the event WYE FLOAT, opened by former Olympic ski jumper Eddie the Eagle. [26]

Walkers can enjoy the Wye Valley Walk which follows the route of the River Wye from Coed Hafren, near Plynlimon, to Chepstow along a series of well-maintained way-marked paths. A viewpoint near The Biblins on the Wye is known as 'Three Counties View', the meeting place of the counties of Herefordshire, Gloucestershire and Monmouthshire.

This list is incomplete; you can help by adding missing items with reliable sources.

In February 2020, Wales and parts of England endured extremely heavy rainfall from Storm Dennis, following shortly after Storm Ciara. The central part of South Wales was particularly affected. The river over-topped its banks and caused flash flooding in several areas including Hay-on-Wye, Hereford, Ross-on-Wye and Monmouth. Much of Hereford was flooded with homes inundated. Churches and leisure centres were opened to accommodate evacuated residents. The river at Monmouth reached its highest level ever recorded. [27] [28]

The Romantic poet William Wordsworth includes an apostrophe to the Wye in his famous poem " Lines Written a Few Miles Above Tintern Abbey" published 1798 in Lyrical Ballads:

Nelson travelled down the Wye in 1802, along with Lady Hamilton and her husband, Sir William Hamilton. [29] They sailed from Ross-on-Wye to Monmouth, to be greeted by a cannonade and the band of the Monmouthshire Militia playing See, the Conquering Hero Comes. [29] Nelson expressed surprise that he was known at "such a little gut of a river as the Wye". [29]

Views of the river

Bridges on the river

See also: List of crossings of the River Wye