From Wikipedia
https://en.wikipedia.org/wiki/River_Exe
river in Devon and Somerset, England
For the river in Hampshire formerly known as the River Exe, see Beaulieu River. 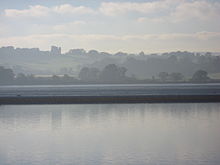 The Exe Estuary with Powderham Castle in the background.

The River Exe ( /ˈɛks/ EKS) in England rises at Exe Head, near the village of Simonsbath, on Exmoor in Somerset, 8.4 kilometres (5 mi) from the Bristol Channel coast, but flows more or less directly due south, so that most of its length lies in Devon. It flows for 60 miles (96 km) [1] and reaches the sea at a substantial ria, the Exe Estuary, on the south ( English Channel) coast of Devon. Historically, its lowest bridging point was at Exeter, which is the largest settlement on the river, but there is now a viaduct for the M5 motorway about 3 kilometres (2 mi) south of the city centre. 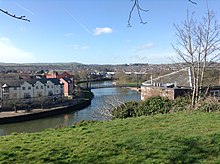 The River Exe at Exeter Quay.

The river's name derives from *Iska, a Common Brittonic root meaning "water" or "abounding in fish", and a cognate of pysg the plural word for "fish" in Welsh. [2] [3] The same root separately developed into the English Axe and Esk, the Welsh Usk, though not, as some have claimed, the word whisky, this latter being from the Classical Irish/Gaelic uisgi "water" (the fuller phrase being uisgi betha; Irish: uisce beatha; Scottish Gaelic: uisge beatha; " aqua vitae" ("water of life")).

The river gave the name of Exeter ("fortress on the Exe") and many other settlements along its course, including Exford, Up Exe, Nether Exe, Exwick, Exton, Exminster, and Exebridge, [4] where it is joined by the River Barle. The seaside town of Exmouth is at the east side of the estuary mouth, and Dawlish Warren is at the west, with its long sand spit extending across the mouth.

The river fuelled Exeter's growth and relative importance in medieval times. The city's first industrial area was developed at Exe Island, which was created in the 10th century by digging a series of leats into the sandy and marshy land bordering the river. The island became home to numerous watermills producing paper and textiles. [5]

Tides on the river are limited at Trews Weir in Exeter, two kilometres upstream of Countess Wear, the site of a former weir commissioned by the Countess of Devon in the 13th century. [6] The Exeter Canal bypassed this weir to enable ships to reach Exeter Quay. At high tide, the estuary forms a large body of water that is heavily used for water sports especially sailing, windsurfing and water skiing.

At low tide, extensive mud flats are exposed, and these are an important feeding source for wading birds. Along with other rias in South West England, the Exe estuary is an important site for wintering waders. Dawlish Warren is a favoured site for birdwatching. The river has a low pH but does not suffer from a serious acid rain problem. It is populated with wild brown trout , and in the lower reaches coarse fish including dace, chub, perch, roach, pike and bream and some grayling, the average size being 8–10 ounces (230–280 g). There is a run of Atlantic salmon and a sparse run of sea trout. Just 150 metres (490 ft) below the union of the River Barle is Black Pool, which is one of the best, and highest salmon pools on the river. The smaller fish species present include stone loach and there are good reasons to assume others are present.

In 2008 the Environment Agency embarked on a project to clean the river from vegetation forming. In order to do so the water level decreased to its lowest level – lower than during the droughts the city has suffered. [7]