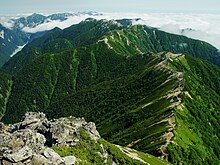 A mountain ridge in Japan

A stratigraphic ridge within the Appalachian Mountains. 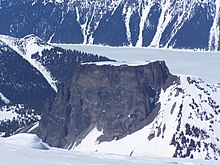 The edges of tuyas can form ridges.

A ridge or a mountain ridge is a geographical feature consisting of a chain of mountains or hills that form a continuous elevated crest for some distance. The sides of the ridge slope away from narrow top on either side. The lines along the crest formed by the highest points, with the terrain dropping down on either side, are called the ridgelines. Ridges are usually termed hills or mountains as well, depending on size. 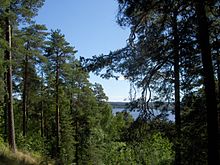 The Pyynikki Ridge in Tampere, Finland

There are several main types of ridges: