A sample of rhyodacite from Slovakia 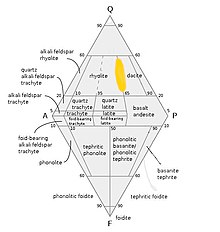 QAPF diagram with the approximate location of rhyodacite highlighted

TAS diagram with the approximate location of rhyodacite highlighted

Under IUGS guidelines, rhyodacites are not formally defined in either the QAPF classification, used to classify igneous rocks by their mineral content, or the TAS classification, used to classify volcanic rocks chemically. However, the IUGS allows the use of the term to describe rocks close to the boundary between the rhyolite and dacite fields in each classification scheme. Rhyodacite then describes a fine-grained igneous rock containing between 20% and 60% quartz and in which plagioclase makes up about two-thirds of the total feldspar content. [1] [2] Such a rock will contain between 69% and 72% silica by weight. [3]

The U.S. Geological Survey defines rhyodacite as volcanic rock containing 20% to 60% quartz and with plagioclase making up 35% to 65% of the total feldspar content. This makes rhyodacite the extrusive equivalent of monzogranite. [4]

In addition to its quartz and feldspar content, rhyodacite commonly contains phenocrysts of andesine, biotite, hornblende, and pyroxene. Quartz and sanidine phenocrysts are less common than in rhyolite, and rhyolite has only scant mafic phenocrysts. [5]

Like other silica-rich compositions, rhyodacites are more abundant as pyroclastic rock than as lava flows. [6] These include extensive ash flows and fallout sheets that are important stratigraphic markers. [5]

Rhyodacite lava flows occur in northwestern Ferry County (Washington), [4] and at An Sgùrr on the island of Eigg in Scotland. [7]