From Wikipedia
(Redirected from Rallidae)
https://en.wikipedia.org/wiki/Rallidae
Family of birds

The rails, or Rallidae, are a large cosmopolitan family of small- to medium-sized, ground-living birds. The family exhibits considerable diversity and includes the crakes, coots, and gallinules. Many species are associated with wetlands, although the family is found in every terrestrial habitat except dry deserts, polar regions, and alpine areas above the snow line. Members of the Rallidae occur on every continent except Antarctica. Numerous island species are known. The most common rail habitats are marshland and dense forest. They are especially fond of dense vegetation. [2]

"Rail" is the anglicized respelling of the French râle, from Old French rasle. It is named from its harsh cry, in Vulgar Latin *rascula, from Latin rādere ("to scrape"). [3] 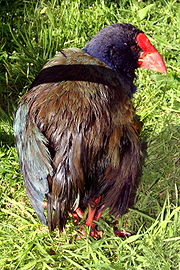 The bill is the most variable feature within the family. In some species, it is longer than the head (like the clapper rail of the Americas); in others, it may be short and wide (as in the coots), or massive (as in the purple gallinules). [5] A few coots and gallinules have a frontal shield, which is a fleshy, rearward extension of the upper bill. The most complex frontal shield is found in the horned coot. [6]

The wings of all rails are short and rounded. The flight of those Rallidae able to fly, while not powerful, can be sustained for long periods of time, and many species migrate annually. The weakness of their flight, however, means they are easily blown off course, thus are common vagrants, a characteristic that has led them to colonize many isolated oceanic islands. Furthermore, these birds often prefer to run rather than fly, especially in dense habitat. Some are also flightless at some time during their moult periods. [8]

Flightlessness in rails is one of the best examples of parallel evolution in the animal kingdom. Of the roughly 150 historically known rail species, 31 extant or recently extinct species evolved flightlessness from volant (flying) ancestors. [9] This process created the endemic populations of flightless rails seen on Pacific islands today.

Many island rails are flightless because small island habitats without mammalian predators eliminate the need to fly or move long distances. Flight makes intense demands, with the keel and flight muscles taking up to 40% of a bird's weight. [9] Reducing the flight muscles, with a corresponding lowering of metabolic demands, reduces the flightless rail's energy expenditures. [10] For this reason, flightlessness makes it easier to survive and colonize an island where resources may be limited. [11] This also allows for the evolution of multiple sizes of flightless rails on the same island as the birds diversify to find niches. [12]

In addition to energy conservation, certain morphological traits also affect rail evolution. Rails have relatively small flight muscles and wings to begin with. [13] In rails, the flight muscles make up only 12 - 17% of their overall body mass. [9] This, in combination with their terrestrial habits and behavioral flightlessness, is a significant contributor to the rail's remarkably fast loss of flight; [14] as few as 125,000 years were needed for the Laysan rail to lose the power of flight and evolve the reduced, stubby wings only useful to keep balance when running quickly. [15] Indeed, some argue that measuring the evolution of flightlessness in rails in generations rather than millennia might be possible. [11]

Another factor that contributes to the occurrence of the flightless state is a climate that does not necessitate seasonal long-distance migration; this is evidenced by the tendency to evolve flightlessness at a much greater occurrence in tropical islands than in temperate or polar islands. [16] 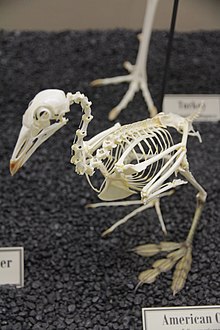 American coot (Fulica americana) skeleton on display at the Museum of Osteology.

It is paradoxical, since rails appear loath to fly, that the evolution of flightless rails would necessitate high dispersal to isolated islands. [13] Nonetheless, three species of small-massed rails, Gallirallus philippensis, Porphyrio porphyrio, and Porzana tabuensis, exhibit a persistently high ability to disperse long distances among tropic Pacific islands, [13] though only the latter two gave rise to flightless endemic species throughout the Pacific Basin. [17] In examining the phylogeny of G. philippensis, although the species is clearly polyphyletic (it has more than one ancestral species), it is not the ancestor of most of its flightless descendants, revealing that the flightless condition evolved in rails before speciation was complete. [17]

A consequence of lowered energy expenditure in flightless island rails has also been associated with evolution of their "tolerance" and "approachability". [16] For example, the (non-Rallidae) Corsican blue tits exhibit lower aggression and reduced territorial defense behaviors than do their mainland European counterparts, [18] but this tolerance may be limited to close relatives. [19] The resulting kin-selecting altruistic phenomena reallocate resources to produce fewer young that are more competitive and would benefit the population as an entirety, rather than many young that would exhibit less fitness. [16] Unfortunately, with the human occupation of most islands in the past 5,000 to 35,000 years, selection has undoubtedly reversed the tolerance into a wariness of humans and predators, causing species unequipped for the change to become susceptible to extinction. [16]

In general, members of the Rallidae are omnivorous generalists. Many species eat invertebrates, as well as fruit or seedlings. A few species are primarily herbivorous. [2] The calls of Rallidae species vary and are often quite loud. Some are whistle-like or squeak-like, while others seem unbirdlike. [20] Loud calls are useful in dense vegetation, or at night where seeing another member of the species is difficult. Some calls are territorial. [5]

The most typical family members occupy dense vegetation in damp environments near lakes, swamps, or rivers. Reed beds are a particularly favoured habitat. Those that migrate do so at night.

Most nest in dense vegetation. In general, they are shy, secretive, and difficult to observe. Most species walk and run vigorously on strong legs, and have long toes that are well adapted to soft, uneven surfaces. They tend to have short, rounded wings, and although they are generally weak fliers, they are, nevertheless, capable of covering long distances. Island species often become flightless, and many of them are now extinct following the introduction of terrestrial predators such as cats, foxes, weasels, mongooses, rats, and pigs.

Many reedbed species are secretive (apart from loud calls), crepuscular, and have laterally flattened bodies. In the Old World, long-billed species tend to be called rails and short-billed species crakes. North American species are normally called rails irrespective of bill length. The smallest of these is Swinhoe's rail, at 13 cm (5.1 in) and 25 g. The larger species are also sometimes given other names. The black coots are more adapted to open water than their relatives, and some other large species are called gallinules and swamphens. The largest of this group is the takahe, at 65 cm (26 in) and 2.7 kg (6.0 lb).

The rails have suffered disproportionally from human changes to the environment, and an estimated [21] [22] [23] several hundred species of island rails have become extinct because of this. Several island species of rails remain endangered, and conservation organisations and governments continue to work to prevent their extinction.

The breeding behaviors of many Rallidae species are poorly understood or unknown. Most are thought to be monogamous, although polygyny and polyandry have been reported. [24] Most often, they lay five to 10 eggs. Clutches as small as one or as large as 15 eggs are known. [24] Egg clutches may not always hatch at the same time. Chicks become mobile after a few days. They often depend on their parents until fledging, which happens around 1 month old. [6]

The Guam rail is an example of an island species that has been badly affected by introduced species.

Some larger, more abundant rails are hunted and their eggs collected for food. [25] The Wake Island rail was hunted to extinction by the starving Japanese garrison after the island was cut off from supply during World War II. [26] At least two species, the common moorhen and the American purple gallinule, have been considered pests. [25]

Due to their tendencies towards flightlessness, many island species have been unable to cope with introduced species. The most dramatic human-caused extinctions occurred in the Pacific Ocean as people colonised the islands of Melanesia, Polynesia, and Micronesia, during which an estimated 750–1800 species of birds became extinct, half of which were rails. [27] Some species that came close to extinction, such as the Lord Howe woodhen, and the takahe, have made modest recoveries due to the efforts of conservation organisations. The Guam rail came perilously close to extinction when brown tree snakes were introduced to Guam, but some of the last remaining individuals were taken into captivity and are breeding well, though attempts at reintroduction have met with mixed results. [28] [29] [30]

The family Rallidae was introduced (as Rallia) by the French polymath Constantine Samuel Rafinesque in 1815. [31] [32] The family has traditionally been grouped with two families of larger birds, the cranes and bustards, as well as several smaller families of usually "primitive" midsized amphibious birds, to make up the order Gruiformes. The alternative Sibley-Ahlquist taxonomy, which has been widely accepted in America, raises the family to ordinal level as the Ralliformes. Given uncertainty about gruiform monophyly, this may or may not be correct; it certainly seems more justified than most of the Sibley-Ahlquist proposals. However, such a group would probably also include the Heliornithidae (finfoots and sungrebes), an exclusively tropical group that is somewhat convergent with grebes, and usually united with the rails in the Ralli.

Additionally, many prehistoric rails of extant genera are known only from fossil or subfossil remains, such as the Ibiza rail (Rallus eivissensis). These have not been listed here; see the genus accounts and the articles on fossil and Late Quaternary prehistoric birds for these species. 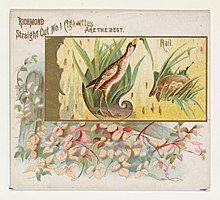 1888 color lithograph of a rail

The undescribed Fernando de Noronha rail, genus and species undetermined, survived to historic times. The extinct genus Nesotrochis from the Greater Antilles was formerly considered to be a rail, but based on DNA evidence is now known to be an independent lineage of gruiform more closely related to Sarothruridae and adzebills.

Fossil species of long- extinct prehistoric rails are richly documented from the well-researched formations of Europe [34] and North America, as well from the less comprehensively studied strata elsewhere:

These taxa may or may not have been rails:

The presumed scolopacid wader Limosa gypsorum (Montmartre Late Eocene of France) is sometimes considered a rail and then placed in the genus Montirallus. [45]