From Wikipedia
(Redirected from Rajapramukh)
https://en.wikipedia.org/wiki/Rajapramukh
Administrative title in India (1947-56) 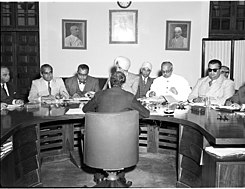 Rajpramukh was an administrative title in India which existed from India's independence in 1947 until 1956. Rajpramukhs were the appointed governors of certain Indian provinces and states.

The British Indian Empire, which included most of present-day India, Pakistan, and Bangladesh, was made up of two types of political units. British India consisted of fifteen provinces, all British possessions, ruled directly by the British in all respects, either through a governor or a chief commissioner, officials appointed by the viceroy. Existing alongside British India were a large number of princely states, ruled by local hereditary rulers, who acknowledged British suzerainty, including British control of their external affairs, but who retained local autonomy. At the time of the proclamation of Queen Victoria as Empress of India in 1875, more than 700 Indian princely states and territories enjoyed treaty relations with the British Crown. The exact relationship between the Government of India (controlled by the British) and these states varied enormously, ranging from treaties of alliance, defence, protection, or supervision to almost outright control. The British Crown assumed control of British India from the East India Company in 1857 and thereafter controlled the internal governance through a Secretary of State for India in London and a Viceroy in India.

After independence under the Dominion of India, 1947–1950

On 20 February 1947, the British government announced its intention to transfer power in British India to Indian hands by June 1948. However, the Cabinet Mission Plan on 16 May 1947 failed to evolve a constitution for India acceptable to all contending parties. Subsequently, the British government announced on 3 June 1947 its intention to partition British India into two dominions. On 15 July 1947, the House of Commons passed the India Independence Bill 1947, to divide British India into the dominions of India and Pakistan. The House of Lords followed suit the next day. The Bill received the Royal assent on 18 July 1947. From this day the suzerainty of the British Crown over the Indian princely states lapsed as per 7(b) of the India Independence Act 1947, and with it all treaties between the British Crown and the Indian states also had a legal quietus. The Rulers of the Indian States became sovereign rulers from 18 July 1947, and in principle they were free to accede to either of the two dominions or to remain independent. As per the provisions of the Act, on 15 August 1947 two independent dominions of India and Pakistan were established. The leaders in the Indian Independence movement put strong pressure on the Indian rulers to accede their states to the Dominion of India. By 15 August 1947, virtually all of the Rulers had signed an Instrument of Accession with the Governor-General of India, giving power to the dominion government to make laws on the three subjects of foreign policy, communication and defence, and otherwise they remained sovereign rulers. These Rulers also signed another agreement known as the "Stand Still Agreement", to provide continuity to any existing agreements between British India and their States.

Three Indian states namely Hyderabad, Jammu and Kashmir, and Junagadh, failed to accede to either of the dominions. Jammu together with parts of Kashmir was incorporated into India after the Maharaja Hari Singh was forced to seek Indian military intervention against the marauding Pakistani sponsored tribal lords (Afridis). In time, the two remaining states of Hyderabad and Junagadh were invaded and annexed by India.

In 1948 the Maharaja of Gwalior signed a covenant with the rulers of the adjoining princely states to form a new state known as Madhya Bharat. This new covenanting state was to be governed by a council of the rulers with a head known as Rajpramukh. This new state signed a fresh Instrument of Accession with the Indian dominion. Subsequently, many other Indian states merged with their neighbouring Indian states on the same lines to form the covenanting states known as Vindhya Pradesh, Patiala and East Punjab States Union ( PEPSU), Rajputana, etc.

In the intervening period the Dominion Government of India had set up a Constitution Assembly to formulate a new Constitution for India. Simultaneously each of the independent Indian rulers and Rajpramukhs of covenanting states had set up Constituent Assemblies for their respective states and also sent their representatives to the Constituent Assembly of India so as to make uniform laws for their respective states. The thinking among Indian leaders at that time was that each princely state or covenanting state would remain independent as a Federal state along the lines suggested originally by the 1935 Act. But as the drafting of the constitution progressed and the idea of forming a republic took concrete shape, it was decided that all the princely states/covenanting states would merge with the Republic of India, and all the Maharajas would be provided with a Privy Purse and privileges as enjoyed by them on 15 August 1947 by constitutional guarantees. Hence Art. 294, Art 362, Art 366, Art 363 were incorporated. Besides it was also decided that the Maharaja of Mysore, the Maharaja of Jammu & Kashmir, the Nizam of Hyderabad, and the Rajpramukhs of the covenanting states would continue to be the constitutional heads of their respective states. By 26 October 1949, the constituent assembly had finalised a new constitution for India and all the acceding Indian princely states and the covenanting states merged with the new Republic of India. In accordance with constitutional provisions all the Maharajas entered into another agreement with the Governor-General of India to provide for the specific privy purse amount, the right to their personal properties (as distinct from state properties), and the right to succession in accordance with the practice in their territories. These agreements were entered into before 26 January 1950 so as to bring them within the ambit of Art. 363. On 26 January 1950, India became a republic. The new constitution created four types of administrative divisions in India: nine Part A states, the former British provinces, which were ruled by an appointed governor and state legislature; eight Part B states, former princely states or groups of covenanting states, which were governed by a Rajpramukh; ten Part C states, including both former princely states and provinces, which were governed by a chief commissioner; and a union territory ruled by a governor appointed by the President of India.

On 1 November 1956, the States Reorganization Act took effect, which erased the distinction between parts A, B, and C states, and reorganised state boundaries along linguistic lines. Of the Part B states, Rajputana was merged with Ajmer-Merwara state to become Rajasthan; Hyderabad was partitioned among Mysore, Andhra Pradesh, and Bombay state; Saurashtra was merged into Bombay state; Travancore-Cochin was merged with Malabar district to form the new state of Kerala; Madhya Bharat and Vindhya Pradesh were merged into Madhya Pradesh; Patiala and East Punjab States Union ( PEPSU) was merged into Punjab state, and Mysore state was enlarged with the addition of Coorg state and parts of Bombay, Madras and Hyderabad states.

By 1956, the system of voluntary unions of states was dismantled and the position of Rajpramukh abolished. New states were created along linguistic and ethnic lines, which tore apart the traditional ties that existed in the former princely states. As the princely rulers died one by one more time was being taken before their successors were recognised by the Government of India. When they were recognised it was usually after they were persuaded to accept lower privy purses or reductions in privileges. But many influential Maharajahs and Maharanis were not content with being mere nominal title holders enjoying privileges. They started contesting in elections either as independents or by joining political parties. Growing popularity and success of many of the former royalty in the hustings particularly Maharani Gayatri Devi of Jaipur and Rajmata of Gwalior, Viajya Raje Sindhia among others was not to the liking of Mrs. Indira Gandhi who had become prime Minister by 1966.

By the year 1969 Indian National Congress had split into Congress (Organization) and Congress (Ruling). Congress (R) was headed by Mrs. Indira Gandhi and to score public support she coined slogans like Garibi Hatao (Stop Poverty) which included promise to abolish the royal order. She de-recognized all the Maharajahs by a presidential order in 1969. But this was struck down by the Supreme Court of India. Eventually, the government by the 26th Amendment of the Constitution of India was successful in abolishing the Princely order. This process was completed by the end of 1971. Though a challenge to this amendment was mounted in the Supreme Court, the court neither heard the matter immediately nor gave any relief to the rulers. The case was ultimately decided against the rulers by as late as in 1993, by which time it had become fait accompli.

They have since only enjoyed their traditional styles and titles on a social basis and seem to have adapted well. Former royals like Captain Amarinder Singh - Maharaja of Patiala, Maharani Vasundhara Raje Scindia of Dholpur even rose to post of Chief Ministers of Punjab and Rajasthan respectively till recently. Many others like V. P. Singh, Digvijay Singh, Srikanata Datta Narasimha Raja Wadiyar, Madhavrao Scindia and his son Jyotiraditya Scindia, Arjun Singh, and many others have been active politics and been prime minister, governors, ministers, MPs and MLAs at different times.