Inside the train driver's cab of a German ICE train 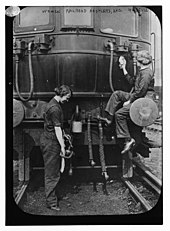 A train driver, engine driver, engineman or locomotive driver, commonly known as an engineer in the United States and Canada, and also as a locomotive handler, locomotive operator, train operator, or motorman, is a person who drives a train or a locomotive. The driver is in charge of, and responsible for operating the engine, as well as the mechanical operation of the train, train speed, and all train handling. In American English, a hostler moves engines around train yards, but does not take them out on the normal tracks; the British English equivalent is a shunter.

For many American railroads, the following career progression is typical: assistant conductor ( brakeman), train conductor and finally the engineer. For many years the fireman was next in line to be an engineer but that classification has been eliminated. In the US, drivers are required to be certified and re-certified every two to three years. [1]

In India, a driver starts as a diesel assistant (or electrical assistant for electric locomotives). They then get promoted on a scale: goods, passenger, mail express, and the Rajdhani, Shatabdi, and Duronto express services. [2]

The United Kingdom based transport historian Christian Wolmar stated in October 2013 that train operators employed by the Rio Tinto Group to transport iron ore across the Australian outback were likely to be the highest-paid members of the occupation in the world at that time. [3]

The following examine the role of the railroad engineer from 1890 to 1919, discussing qualifications for becoming an engineer and typical experiences on the job: