The Ragamuffin War (Portuguese: Guerra dos Farrapos or, more commonly Revolução Farroupilha) was a Republican uprising that began in southern Brazil, in the province (current state) of Rio Grande do Sul in 1835. The rebels were led by generals Bento Gonçalves da Silva and Antônio de Sousa Neto with the support of the Italian fighter Giuseppe Garibaldi. The war ended with an agreement between the two sides known as Green Poncho Treaty (Portuguese: Tratado de Poncho Verde) in 1845.

The revolution was considered a separatist movement, influencing the Liberal Rebellions in São Paulo, Rio de Janeiro, and Minas Gerais states, 1842, and Sabinada in Bahia, 1837, both of ideology of Liberal Party at the time.

The abolition of slavery was one of the demands of the Farrapos movement. [2] [3] Aiming their freedom, many slaves organized troops during the Ragamuffin War. The most famous is the Black Lancers Troop (Portuguese: Lanceiros Negros), annihilated in a surprise attack in 1844 known as Battle of Porongos.

Beginning of the war

The uprising is believed to have begun due to the difference between the economy of Rio Grande do Sul and the rest of the country. Unlike the other provinces, the economy of Rio Grande do Sul focused on the internal market rather than exporting commodities. The province's main product, charque (dried and salted beef), suffered badly from competition from charque imported from Uruguay and Argentina. The people that benefited from these markets were called "Gauchos," nomadic cowhands and farmers who lived in Rio Grande do Sul. [4] The Gauchos also lived in Argentina and Uruguay. [4]

In 1835, Antônio Rodrigues Fernandes Braga [ pt] was nominated president of Rio Grande do Sul and at first, his appointment pleased the liberal farmers, but that soon changed. On his first day in the office, he accused many farmers of being separatists.[ citation needed]

On 20 September 1835, General Bento Gonçalves captured the capital, Porto Alegre, beginning an uprising against the perceived unfair trade reinforced by the provincial government. The provincial president fled to the city of Rio Grande, 334 km (208 mi) to the south. In Porto Alegre, the rebels, also known as "ragamuffins" (farrapos) after the fringed leather worn by the gauchos, [5] elected Marciano José Pereira Ribeiro [ pt] their new president.[ citation needed] Responding to the situation and further upsetting the rebels, the Brazilian regent, Diogo Antônio Feijó, appointed a new provincial president, who was forced to take office in exile in Rio Grande.

The Brazilian Army had a number of problems at the time and were not able to handle the secessionist threat. [6] Through military reforms, the mass recruitment of civilians was made possible and they were able to quell the rebels in 1845. [6]

Declaration of the Piratini Republic. 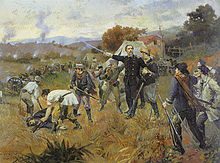 Pushing to consolidate their power, Antônio de Souza Neto declared the independence of the Riograndense or Piratini Republic on 11 September 1836, with Bento Gonçalves as president nominee. However, Gonçalves was arrested and jailed by imperial forces until he escaped in 1837, returning to the province and bringing the revolution to a head. Nonetheless, Porto Alegre was recaptured by the empire and the rebels never managed to regain it.[ citation needed]

Led by the Italian revolutionary Giuseppe Garibaldi, who joined the rebels in 1836, and Anita Garibaldi, the revolution spread north through Santa Catarina, which adjoined Rio Grande do Sul. One of the main cities of Santa Catarina, Laguna, was taken by the rebels but fell back into imperial hands after four months. It was in this struggle that Garibaldi gained his first military experience and got on the road leading to his becoming the famed military leader of the Unification of Italy. [7] The rebel forces were also aided financially and indirect military support by the Uruguayan government led by José Fructuoso Rivera. [8] The Uruguayans had the intention of creating a political union with the Riograndense Republic to create a new stronger state. [8]

The rebels refused an offer of amnesty in 1840. In 1842, they issued a Republican constitution as a last attempt to maintain power.[ citation needed] The same year saw General Lima e Silva take command of Imperial forces in the area, and try to negotiate a settlement. 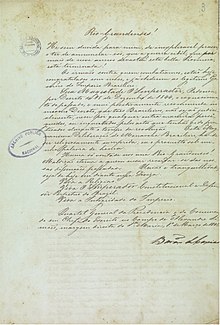 Declaration of the Brazilian Government announcing the end of the war, in 1845.

On 1 March 1845, the peace negotiations led by Lima e Silva and Antônio Vicente da Fontoura concluded with the signing of the Green Poncho Treaty (Portuguese: Tratado de Poncho Verde) between the two sides, in Dom Pedrito. The treaty offered the rebels a full amnesty, full incorporation into the imperial army and the choice of the next provincial president. All the debts of the Riograndense Republic were paid off by the Empire and a tariff of 25% was introduced on imported charque. The Riograndense and Juliana Republics remained in the Empire of Brazil and are now two states of the Federative Republic of Brazil, Rio Grande do Sul and Santa Catarina respectively.

As a goodwill gesture, the rebels chose Lima e Silva as the next provincial president.[ citation needed]

The Brazilian Army reorganized itself to be a proper fighting force during the Ragamuffin War. [6] The military would be able to defeat insurgencies that rose up during the Imperial Era of Brazil. However, this reformed military would prove disastrous against the Emperor when they rebelled to create a Republic.