From Wikipedia
https://en.wikipedia.org/wiki/Pylon_(architecture)
Monumental gateway of an Egyptian temple
For other uses, see Pylon. 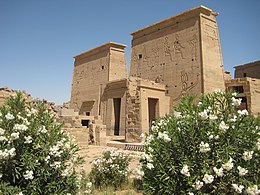 Pylon is the Greek term (Greek: πυλών) for a monumental gate of an Egyptian temple (Egyptian: bxn.t in the Manuel de Codage transliteration [1]). It consists of two towers, each tapering and surmounted by a cornice, joined by a less elevated section enclosing the entrance between them. [2] The gate was generally about half the height of the towers. Contemporary paintings of pylons show them with long poles flying banners.

In ancient Egyptian religion, the pylon mirrored the hieroglyph for 'horizon' or akhet, which was a depiction of two hills "between which the sun rose and set." [2] Consequently, it played a critical role in the symbolic architecture of a cult building which was associated with the place of recreation and rebirth.

Pylons were often decorated with scenes emphasizing a king's authority since it was the public face of a cult building. [2] On the first pylon of the temple of Isis at Philae, the pharaoh is shown slaying his enemies while Isis, Horus and Hathor look on. Other examples of pylons can be seen in Karnak, Luxor, and Edfu.

Rituals to the god Amun who became identified with the sun god Ra were often carried out on the top of temple pylons. In addition to standard vertical grooves on the exterior face of a pylon wall which were designed to hold flag poles, some pylons also contained internal stairways and rooms. [2] The oldest intact pylons belong to mortuary temples from the 13th and 12th century BCE Ramesside period. [2] A pair of obelisks usually stood in front of a pylon.

In 1928, a Pylon was erected by public subscription to commemorate the extension of the County Borough of Brighton on 1 April of that same year. The two stone towers known locally as "the Pylons" (sic) still stand and are clearly visible to travellers on either carriageway of the A23 road. The Patcham Pylon towers flank the southbound carriageway of the A23 just outside the city of Brighton and Hove and are listed Grade II: of special interest warranting every effort to preserve them. [3]

Many cathedrals have a similar western end, such as Elgin Cathedral in Elgin, Moray.