From Wikipedia
https://en.wikipedia.org/wiki/Puffball
For other uses, see Puffball (disambiguation). 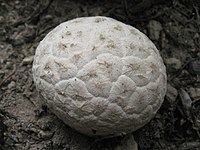 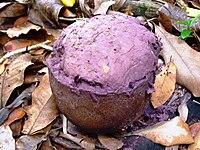 Calvatia cyathiformis
Puffballs are found in several genera of the division Basidiomycota.

Puffballs are fungi, so named because clouds of brown dust-like spores are emitted when the mature fruitbody bursts or is impacted. Puffballs are in the division Basidiomycota and encompass several genera, including Calvatia, Calbovista and Lycoperdon. [1] True puffballs do not have a visible stalk or stem. The puffballs were previously treated as a taxonomic group called the Gasteromycetes or Gasteromycetidae, but they are now known to be a polyphyletic assemblage.

The distinguishing feature of all puffballs is that they do not have an open cap with spore-bearing gills. Instead, spores are produced internally, in a spheroidal fruitbody called a gasterothecium (gasteroid ('stomach-like') basidiocarp). As the spores mature, they form a mass called a gleba in the centre of the fruitbody that is often of a distinctive color and texture. The basidiocarp remains closed until after the spores have been released from the basidia. Eventually, it develops an aperture, or dries, becomes brittle, and splits, and the spores escape. The spores of puffballs are statismospores rather than ballistospores, meaning they are not forcibly extruded from the basidium. Puffballs and similar forms are thought to have evolved convergently (that is, in numerous independent events) from Hymenomycetes by gasteromycetation, through secotioid stages. Thus, 'Gasteromycetes' and 'Gasteromycetidae' are now considered to be descriptive, morphological terms (more properly gasteroid or gasteromycetes, to avoid taxonomic implications) but not valid cladistic terms.

Puffballs were traditionally used in Tibet for making ink by burning them, grinding the ash, then putting them in water and adding glue liquid and "a nye shing ma decoction", which, when pressed for a long time, made a black dark substance that was used as ink. [3] The Native Americans likewise burned the common puffball as a primitive bee smoker to anesthetize honey bees as a means to safely procure honey; the practice later inspired experimental medicinal application of the puffball smoke as a surgical general anesthetic in 1853. [4] 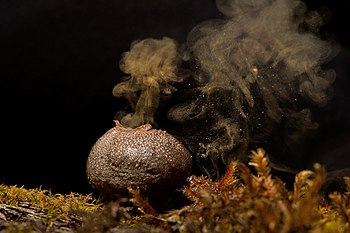 Spores coming out of puffball fungus

While most puffballs are not poisonous, some often look similar to young agarics, and especially the deadly Amanitas, such as the death cap or destroying angel mushrooms. Young puffballs in the edible stage, before maturation of the gleba, have undifferentiated white flesh within; whereas the gills of immature Amanita mushrooms can be seen if they are closely examined. These can be very toxic.

Puffball mushrooms on sale at a market in England

The giant puffball, Calvatia gigantea (earlier classified as Lycoperdon giganteum), reaches a foot (30 cm) or more in diameter, and is difficult to mistake for any other fungus. It has been estimated that a large specimen of this fungus when mature will produce around 7 × 10¹² spores.

Not all true puffball mushrooms are without stalks. Some may also be stalked like the Podaxis pistillaris which is also called the "false shaggy mane". There are also a number of false puffballs that look similar to the true ones. [2]

Play media
Common puffball, releasing spores in a burst by compressing the body 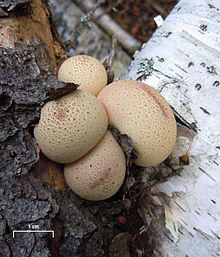