From Wikipedia
https://en.wikipedia.org/wiki/Public_execution
Capital punishment carried out in public view 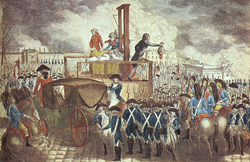 A public execution is a form of capital punishment which "members of the general public may voluntarily attend." [1] This definition excludes the presence of a small number of witnesses randomly selected to assure executive accountability. [2] The purpose of such displays has historically been to deter individuals from defying laws or authorities. Attendance at such events was historically encouraged and sometimes even mandatory.

While today most countries regard public executions with distaste, in the past they were preferred to executions behind closed doors because of their capacity for deterrence. They also allowed the convicted the opportunity to make a final speech, gave the state the chance to display its power in front of those who fell under its jurisdiction, and granted the public what was considered to be a great spectacle. [3] Public executions also permitted the state to project its superiority over political opponents. [3] Thus, when Charles I of England was beheaded, the reduced height of the block meant that he could not assume the normal kneeling pose, but was forced to lie in a face-down position considered to be especially humiliating. [3]

Executions had been condemned by 18th Century Enlightenment thinkers like Montesquieu and politicians like Cesare Beccaria. [4] In Europe and in the northern U.S., the 19th and early 20th centuries saw a shift away from the spectacle of public capital punishment and toward private executions and the deprivation of liberty. [5]

1801 saw the last public execution at Tyburn Hill, after which all executions in York took place within the walls of York Castle (but still publicly) so that "the entrance to the town should not be annoyed by dragging criminals through the streets." [6] In London, those sentenced to death at the Old Bailey would remain at Newgate Prison and wait for their sentences to be carried out in the street. As at Tyburn, the crowds who would come to watch continued to be large and unruly. The last public execution in Great Britain occurred in 1868, [5] after which capital punishment was carried out in the privacy of prisons.

French authorities continued public executions up until 1939. [5] Executions were made private after a secret film of serial killer Eugen Weidmann's death by guillotine emerged and scandalized the process. Disturbing reports emerged of spectators soaking up Weidmann's blood in rags for souvenirs, and in response President Albert Lebrun banned public executions in France for "promoting baser instincts of human nature." [7]

The last public execution in the United States occurred in 1936. [5] As in Europe, the practice of execution was moved to the privacy of chambers. Viewing remains available for those related to the person being executed, victims' families, and sometimes reporters.

Frances Larson wrote in her 2014 book Severed: A History of Heads Lost and Heads Found:

"For as long as there were public executions, there were crowds to see them. In London in the early 19th century, there might have been 5,000 to watch a standard hanging, but crowds of up to 100,000 came to see a famous felon killed. The numbers hardly changed over the years. An estimated 20,000 watched Rainey Bethea hang in 1936, in what turned out to be the last public execution in the U.S." [8]