From Wikipedia
https://en.wikipedia.org/wiki/Pseudomathematics
Mathematics-like activity that does not fit into the framework of formally accepted rules
For broader coverage of this topic, see Pseudo-scholarship. 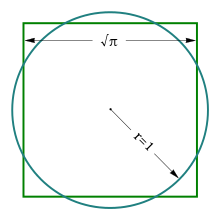 Squaring the circle: the areas of this square and this circle are both equal to π. Since 1882, it is known that this figure cannot be constructed in a finite number of steps with an idealized compass and straightedge. Nevertheless, "proofs" of such constructions were still published even 50 years later. [1]

Pseudomathematics, or mathematical crankery, is a form of mathematics-like activity that aims at advancing a set of questionable beliefs that do not adhere to the framework of rigor of formal mathematical practice. [2] [3] Pseudomathematics has equivalents in other scientific fields, such as pseudophysics, and overlaps with these to some extent.

Pseudomathematics often contain a great amount of mathematical fallacies, whose executions are tied to elements of deceit rather than genuine, unsuccessful attempts at tackling a problem. [2] More often than not, excessive pursuit of pseudomathematics can result in the practitioner being labelled a crank. Because it is based on non-mathematical principles, [3] pseudomathematics is not related to attempts at genuine proofs that contain mistakes. Indeed, such mistakes are common in the careers of amateur mathematicians, some of which would go on to produce celebrated results. [4]

One common type of approach is claiming to have solved a classical problem that has been proved to be mathematically unsolvable. Common examples of this include the following constructions in Euclidean geometry—using only compass and straightedge:

For more than 2,000 years, many people had tried and failed to find such constructions; in the 19th century, they were all proven impossible. [8] [9]:47

Another common approach is to misapprehend standard mathematical methods, and to insist that the use or knowledge of higher mathematics is somehow cheating or misleading (e.g., the denial of Cantor's diagonal argument [10]:40ff and Gödel's incompleteness theorems). [10]:167ff [2]

The term pseudomath was coined by the logician Augustus De Morgan, discoverer of De Morgan's laws, in his A Budget of Paradoxes (1915). De Morgan wrote:

The pseudomath is a person who handles mathematics as the monkey handled the razor. The creature tried to shave himself as he had seen his master do; but, not having any notion of the angle at which the razor was to be held, he cut his own throat. He never tried a second time, poor animal! but the pseudomath keeps on at his work, proclaims himself clean-shaved, and all the rest of the world hairy. [11]

De Morgan gave as example of a pseudomath a certain James Smith who claimed persistently to have proved that π is exactly 3+1/8. [4] Of Smith, De Morgan wrote: "He is beyond a doubt the ablest head at unreasoning, and the greatest hand at writing it, of all who have tried in our day to attach their names to an error." [11] The term pseudomath was adopted later by Tobias Dantzig. [12] Dantzig observed:

With the advent of modern times, there was an unprecedented increase in pseudomathematical activity. During the 18th century, all scientific academies of Europe saw themselves besieged by circle-squarers, trisectors, duplicators, and perpetuum mobile designers, loudly clamoring for recognition of their epoch-making achievements. In the second half of that century, the nuisance had become so unbearable that, one by one, the academies were forced to discontinue the examination of the proposed solutions. [12]

The term pseudomathematics has been applied to attempts in mental and social sciences to quantify the effects of what is typically considered to be qualitative. [13] More recently, the same term has been applied to creationist attempts to refute the theory of evolution, by way of spurious arguments purportedly based in probability or complexity theory. [14] [15]