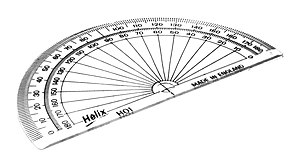 A half circle protractor marked in degrees (180°).

A protractor is a measuring instrument, typically made of transparent plastic or glass, for measuring angles.

Some protractors are simple half-discs. More advanced protractors, such as the bevel protractor, have one or two swinging arms, which can be used to help measure the angle. 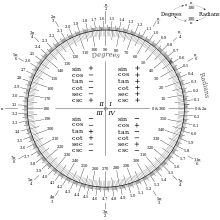 Protractor scale in degrees and radians

They are used for a variety of mechanical and engineering-related applications. One common use is in geometry lessons in schools. 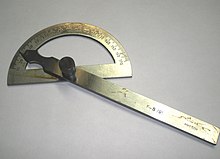 A bevel protractor is a graduated circular protractor with one pivoted arm; used for measuring or marking off angles. Sometimes Vernier scales are attached to give more precise readings. It has wide application in architectural and mechanical drawing, although its use is decreasing with the availability of modern drawing software or CAD.

Universal bevel protractors are also used by toolmakers; as they measure angles by mechanical contact they are classed as mechanical protractors. [1] [2]

The bevel protractor is used to establish and test angles to very close tolerances. It reads to 5 arcminutes (5′ or 1/12°) and can measure angles from 0° to 360°.

The bevel protractor consists of a beam, a graduated dial and a blade which is connected to a swivel plate (with Vernier scale) by thumb nut and clamp. When the edges of the beam and blade are parallel, a small mark on the swivel plate coincides with the zero line on the graduated dial. To measure an angle between the beam and the blade of 90° or less, the reading may be obtained direct from the graduation number on the dial indicated by the mark on the swivel plate. To measure an angle of over 90°, subtract the number of degrees as indicated on the dial from 180°, as the dial is graduated from opposite zero marks to 90° each way.