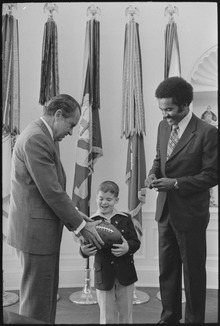 President Nixon, Kevin Heald, 1972 Poster Child of the Arc of the United States

A poster child (sometimes poster boy or poster girl) is, according to the original meaning of the term, a child afflicted by some disease or deformity whose picture is used on posters or other media as part of a campaign to raise money or enlist volunteers for a cause or organization. Such campaigns may be part of an annual effort or event, and may include the name and age of a specific child along with other personally identifiable attributes. [1]

In modern times, a "poster child" is a person of any age whose attributes or behaviour are emblematic of a known cause, movement, circumstance or ideal. The person in question is thought of as an embodiment or archetype. This signifies that the very identity of the subject is synonymous with the associated ideal; or otherwise representative of its most favorable or least favorable aspects.